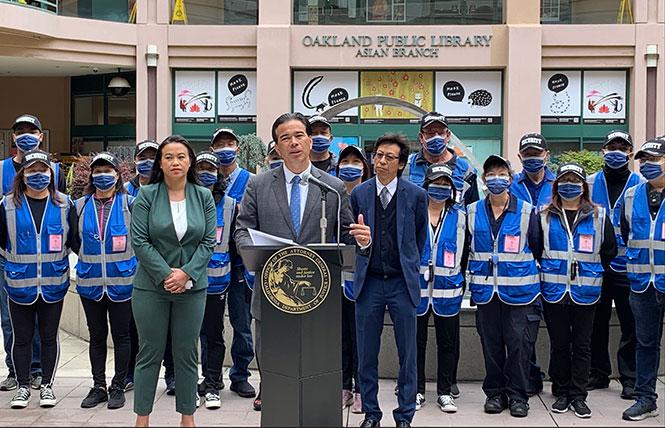 While hate crimes on the basis of sexual orientation declined last year in California, state officials recorded a 72.2% rise in anti-transgender incidents in 2020 compared to the year prior.

It was part of 31% spike in reported hate crimes against various communities in the Golden State last year, according to a report released Wednesday by the California Attorney General's office.

He also released a "special report on anti-Asian violence during the pandemic" as deadly attacks against the Asian American and Pacific Islander community have garnered headlines in the Bay Area and across the state for months.

"We are in a full-on state of violence of hate crimes and hate violence," Bonta said.

The report found that hate crimes motivated by bias against Black or African American people were the highest of any particular group, with 522 incidents reported, compared to 297 incidents in 2019, a rise of 75.8% in a single year.

This was the highest number of anti-Black hate crimes reported in over a decade at least, Bonta said.

Bonta, a Filipino American himself, said that he had to tell his mother recently it may not be safe for her to "go into the city" by herself after a number of violent attacks against elderly Asian people in the Bay Area. The incidents led Alameda County District Attorney Nancy O'Malley in February to create a new response unit to specifically investigate crimes against Asian Americans, particularly seniors, in the East Bay..

Bonta said that a surge in anti-Asian hate crimes occurred in March and April 2020, as California entered lockdown due to the COVID pandemic. Then-President Donald Trump employed a number of racist anti-Asian nicknames for the disease, which originated in China.

Bonta blamed the pandemic for the rise in hate crimes, calling racism an "epidemic" in itself. The state is facing an "epidemic of hate from right here in Oakland Chinatown to the deadly shooting in Atlanta, Georgia," Bonta said.

(Eight people, six of whom were of Asian descent, were killed at Atlanta-area spas or massage parlors in March. Police allege Robert Aaron Long, 21, was the assailant. Long, who told police he was motivated by his religious beliefs, has been indicted on four counts of murder by a grand jury.)

Bonta said that bringing communities together is the most effective way to combat hate.

"One of our most powerful weapons against hate is knowledge," Bonta said. "Ultimately, it's going to take building bridges to make that difference, to ensure every community in the state feels welcome."

Bonta implored victims of hate crimes to write down anything that was said in the commission of the alleged crime that they may remember and, if it's safe, to collect evidence and take pictures.

Still, "we recognize that hate crimes in this state are generally underreported, so let's take these statistics for what they are," he said.

Carl Chan, the president of Oakland's Chinatown Chamber of Commerce, took the podium after Bonta.

Chan was assaulted this spring in Oakland's Chinatown. Police allege James Lee Ramsey, 25 and of Oakland, was the assailant, and O'Malley's office charged Ramsey with hate crime assault.

"We are facing a dual pandemic," Chan said. "We are not just focusing on hate against the API [Asian Pacific Islander] community, but hate based against any community."

Chan said that "one of the major reasons why people don't report this kind of crime is a language issue, which is why we are publishing in over two-dozen languages."

"I myself was the victim of a hate crime," Chan said. "I want the public to know there is information.

"Please, don't be afraid. We are united. We have to work together, and together we can stop hate crimes not just against the API community but against all communities," Chan added.

Reported SF hate crimes against AAPIs, LGBTQs were up in 2021
Sign up!