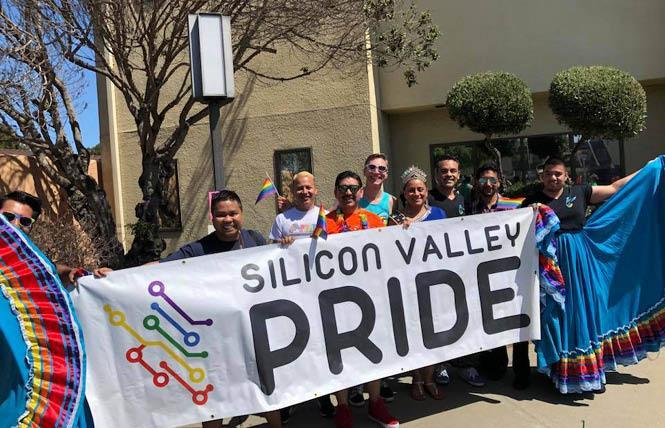 Silicon Valley Pride will be going forward with a parade and festival in downtown San Jose in late August, after the event took place virtually last year due to the COVID-19 pandemic.

This year's theme is "Standing for Love and Liberation," according to a news release.

The festival will begin Saturday, August 28, from 6 to 11 p.m., with two stages at Plaza de César Chávez Park featuring DJs and live performances.

"We start up again on Sunday morning, August 29, at 10 a.m. with our parade along Market Street starting at Julian Street and ending at the main entrance of the festival," the release states. "Festival grounds open once again after the parade ends at noon to the excitement of dance performers, talented artists, and the music of live bands. Headliners and other artists will be announced soon."

The festival will feature a Hey Girl area and stage to celebrate queer women and femme-identified community members; live visual art exhibitions; a cocktail lounge; and food trucks, among other vendors.

Saldy Suriben, a gay man who is the chief marketing officer for Silicon Valley Pride, told the Bay Area Reporter that the organization's board of directors made the decision, tentatively, in early June to go forward with an in-person event, and that this was finalized "based on the guidance from the state published June 15.

"Before making the announcement of having an in-person parade and festival, we have been monitoring the situation of the pandemic since the start of the year and considering different options," Suriben said. "We saw vaccination statistics in California and Santa Clara County improving and heard from our community the desire to get together again, [so] we started to consider an in-person event. The major factor and the key input from our decision was the information coming from the California Department of Public Health and their reopening guidance."

Suriben didn't say if proof of vaccination will be required to attend.

"We will continue to monitor the guidance and regulations and will be following the regulations for outdoor events provided by national, state, and local public health agencies," Suriben stated.

Admission to the festival will be $5 per day, Suriben added.

When asked if there will be dancing, Suriben responded that "the ultimate programming at the event will be aligned to the guidance of the national, state, and local public health agencies."

"There will be [a] DJ section at our festival on both stages," Suriben stated. "We are looking to create an atmosphere at our event that demonstrates the progress we are making at returning to traditional events and will feature DJs, live entertainment, and a new element this year focusing on the visual artists in the LGBTQ+ community."

Nathan Svoboda, a gay man who is president of the Project MORE Foundation and a former president of the organization that now facilitates Silicon Valley Pride, told the B.A.R. that he is "confident and excited."

Svoboda's group had previously advertised a free, outdoor event June 19 to celebrate Pride Month in the Qmunity District — a night of tailgate inspired activities on Post Street coinciding with a livestream of the San Jose Earthquakes Pride game — until that event had to be canceled after "the event's primary sponsor brought some concerns to our attention today that we could not alone remedy."

Svoboda stated to the B.A.R. that "we are looking at doing something similar in the Qmunity District in the future with other partners and formats."

"It was saddening when we had to cancel our June 19 event," he wrote.

The Gay Pride Celebration Committee of San Jose, which produces Silicon Valley Pride, is the largest Pride organization in California outside of San Francisco, according to the release.