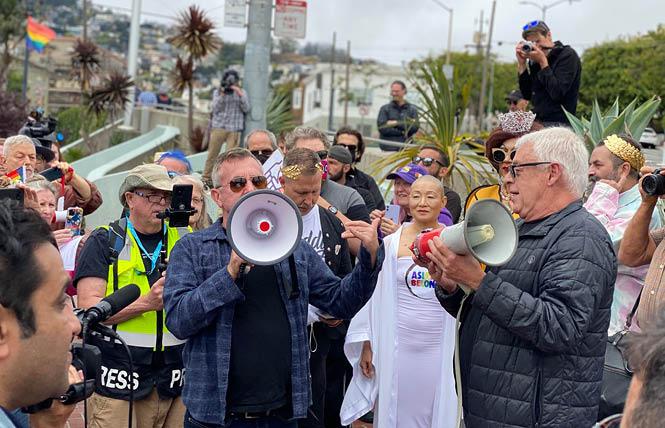 About a hundred people from the LGBTQ and labor communities gathered in San Francisco's Castro district to kick off Pride weekend June 25 by honoring straight ally Allan Baird — a lifelong neighborhood resident who was instrumental to the cause of queer equality in unions.

In 1973, Baird took charge of a union strike against Bay Area distributors, including the Coors Brewing Company. Baird reached out to his neighbor, gay future Supervisor Harvey Milk, to build a coalition. Coors also had a 178-question employment application form, as Nancy Wohlforth explained in 2017 on the International Brotherhood of Teamsters' website.

Gay activist Cleve Jones, a friend of Milk and Baird who organized the afternoon salute, recounted the tale to the assembled crowd at Market and Castro streets at noon.

"We got Coors beer out of every gay bar in North America," Jones said to cheers.

For a time when American labor was often a bastion of social conservatism, Baird's coalition-building did not go unnoticed.

"When the neighborhood changed, he embraced the change," Jones said of Baird.

Terry Beswick, a gay man who is the executive director of the GLBT Historical Society, also spoke. He brought the original bullhorn that Baird gave to Milk, which Milk gave to Jones, and which Beswick presented again to Jones.

"This bullhorn was put on exhibit in [Washington] D.C. as part of [the Smithsonian's] pandemic exhibit — before the current [COVID-19] pandemic — to show the role it played in fighting the AIDS epidemic," Beswick said. 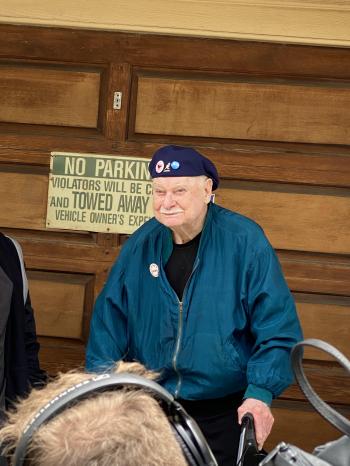 Allan Baird stepped outside of his Castro home June 25 to receive thanks from members of the LGBTQ and labor communities. Photo: John Ferrannini

The crowd marched to Baird's bungalow in the Castro, where Jones presented him with the bullhorn.

Baird, now 89, thanked Jones for taking the initiative to put the event together. He recalled seeing Jones at the screening of the film "Milk" at the Castro Theatre in 2008.

"I wanted to congratulate Cleve, but he couldn't talk," Baird recalled. "He was crying so much. He loved Harvey, and Harvey loved him."

During the march to Baird's home, Jones led chants of "long live Allan Baird" and "long live Harvey Milk." Milk, along with then-mayor George Moscone, was assassinated by disgruntled ex-supervisor Dan White in 1978.

Members of the San Francisco Gay Men's Chorus led the crowd in an old labor anthem, "Solidarity Forever," to the tune of "The Battle Hymn of the Republic," as Baird emerged, accompanied by his caregiver, from his bungalow.

Outside his home, Baird was presented with a certificate by gay District 8 Supervisor Rafael Mandelman, who represents the Castro.

"Unlike a lot of these I give out, this one was signed by all the members of the Board of Supervisors," Mandelman said.

Mandelman continued, reading from the commendation, that Baird "forever changed" the perspective of the labor movement on the matter of LGBTQ acceptance.

"Be it resolved that the San Francisco Board of Supervisors extends its highest commendation and appreciation for Allan's activism and service to the City and County of San Francisco," Mandelman concluded.

The San Francisco Labor Council gave another commendation to Baird, followed by Dan Bernal, a gay man who is the district office chief of staff to House Speaker Nancy Pelosi (D-San Francisco).

"Speaker Pelosi could not be here today to celebrate Allan but asked me and my colleague, Kevin Ortiz, to bring a special certificate to Allan today," Bernal said.

Reading from Pelosi's letter, Bernal said, "your leadership, alongside Harvey Milk, helped forge collaboration between the labor and LGBT communities."

"You have fought to raise the voices of LGBT working people," Pelosi stated. "Best wishes for a wonderful day of celebration."

It was hard to hold back the tears for many in the crowd as Baird thanked his caregiver, and spoke about threats he faced in the labor movement for fighting for social justice. One time, Baird said, a man put a knife to his stomach.

"I didn't give a damn," Baird said resolutely.

"She was a strong lady," Baird said. "Her and her brother owned a bar — believe it or not — in the Castro district in the 1950s and 1960s at Market and Laguna. She told me about different women entering the bar and didn't know what was going on because they were kissing and hugging. She treated them terrific, and from that point more happened."

Baird concluded his remarks, but called the crowd to attention one more time to give a word of encouragement to the trans community.

"I want the trans people to know I support them 100%," Baird said. "They've had a hard time of it, been fighting hard and finally are winning a couple of fights. I hope they hang in there."