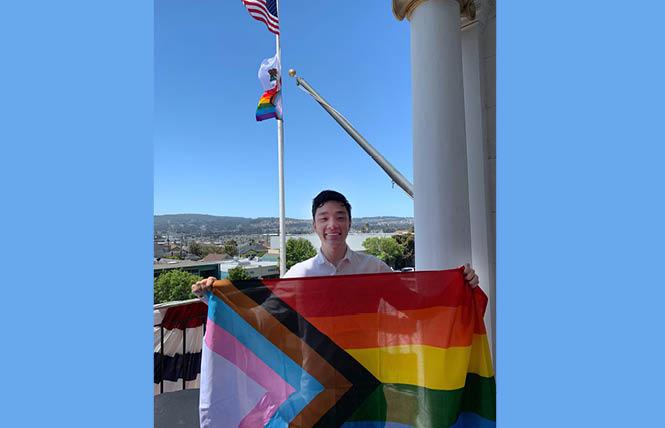 This June, South San Francisco raised the Progress Pride flag. Distinct from the traditional rainbow flag that had been raised in our city since 2015, the Progress flag features additional black, brown, light blue, pink, and white stripes which aim to bring attention to the unique experiences of communities of color and the trans community. This reminded me of a quote by Marsha P. Johnson: "No pride for some of us without liberation for all of us."

Many people know the late Johnson as a prominent activist at the Stonewall Inn riots. What is lesser known is that Johnson was homeless for large portions of their life, as was common among many LGBTQ+ youth at the time. Johnson, along with their friend Sylvia Rivera, founded an organization called Street Transgender Action Revolutionaries, or STAR, to house and support their homeless gay and trans siblings. Together, they refurbished an old rundown apartment, worked hard to pay its rent, and provided shelter to dozens of queer youth.

Decades later, the queer community still faces the same problem of disproportionate rates of homelessness and housing instability. Forty percent of homeless youth in our country are LGBTQ+-identifying youth, 20% of transgender people have experienced homelessness, and more than 10% have been evicted due to their gender identity. Despite the prohibition of discrimination on the basis of gender identity under the Fair Housing Act, discrimination still runs rampant around our country. Today, hundreds of thousands of people currently live homeless on the streets when it would be cheaper to simply house them all. Rather than adequately housing the homeless and providing them with resources, many of our institutions choose to criminalize and stigmatize their struggles instead.

Housing instability doesn't always take the form of an individual living on the street — sometimes it can be invisible. I've personally known young people get kicked out of their parents' household in the middle of the school year for coming out as gay, and forced to couch-surf among their friends' houses. I've seen others unable to come out to their families or fully express themselves due to a fear of losing their home.

Consider that a severe housing shortage with skyrocketing housing prices and rents threaten many with displacement, and have made housing nearly unattainable for everyone in our communities. Over the past couple decades we've seen a multitude of new jobs enter the Bay Area, but met only with a fraction of the necessary homes to house our workers and growing population. We often see and hear the pain of our most marginalized residents and longtime community members being forced to move far away from the neighborhoods they grew up in. Our low-wage essential workers, low-income residents, young people, communities of color, and queer communities will always be the ones who are hurt the most from this shortage. How many more queer youth have to face housing instability before we recognize housing as a human right, and work to create a system of housing that will protect those who could lose their home in an instant?

The decisions we make politically, whether it be in housing or health care, have real material impacts on the most marginalized around us, from the LGBTQ+ community to low-income communities and communities of color. How can we say we support LGBTQ+ rights without fighting for a universal health care system that would provide free gender-affirming care for our trans siblings, or meaningful police reform and accountability for our Black and Brown siblings? What of our queer youth if we do not adequately address the housing crisis they face? The collective liberation of our communities will be founded on the systemic changes we choose to fight for.

Today, donning the rainbow colors has become good PR for the largest corporations that are known to donate to anti-LGBTQ+ politicians, and even morally reprehensible institutions like U.S. Immigration and Customs Enforcement. Do not let these groups and leaders, who are complicit in the face of oppression, rainbow-wash their actions. As we reflect on this Pride Month, know what it means to the LGBTQ+ community when the status quo keeps housing unattainable. Know what it means when the homeless are stigmatized, stereotyped, and criminalized. Know what it means when our elected leaders advocate against affordable housing projects, tenants protections, and zoning reform.

We've undoubtedly seen massive progress over the years in our communities — 2021 was the first year that each of the 20 cities in San Mateo County raised the Progress Pride flag. This was a historic feat, a product of years of advocacy by the San Mateo County LGBTQ Commission and many other organizers throughout the county. But, allyship doesn't stop at raising a flag. Allyship with the LGBTQ+ community means standing up for our social, mental, and economic well being. Allyship means fundamentally questioning the flawed systems and institutions that have governed for so long and have left so many of us behind. Allyship means fighting for affordable housing, robust tenant protections, and an end to exclusionary zoning. Together, we must go beyond symbolic gestures, and continue the work of revolutionaries like Marsha by fighting for the social, racial, and economic justice that all our communities deserve. As Johnson said, "No pride for some of us without liberation for all of us."

James Coleman, who is bisexual, was elected last November to the South San Francisco City Council.