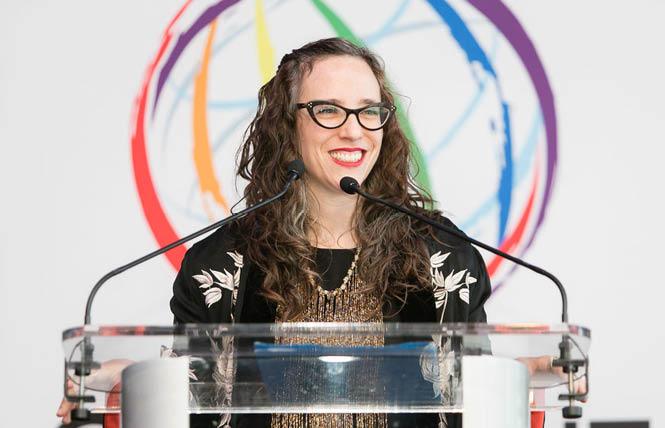 President Joe Biden on Friday announced that he will appoint Jessica Stern, the longtime executive director of OutRight Action International, as the U.S. special envoy for international LGBTQ rights.

The move means that Stern will be stepping down from the New York-based global LGBTQ rights agency she has led since 2012.

Her new role will take her to the State Department, according to a statement from the White House. The special envoy will play a vital role in leading implementation of the Presidential Memorandum on Advancing the Human Rights of LGBTQI+ Persons Around the World, the administration stated.

Stern, a lesbian, will work to bring together like-minded governments, civil society organizations, corporations, and international organizations to uphold dignity and equality for all.

In a June 25 news release from OutRight, Stern praised the nonprofit.

"Serving as OutRight's executive director has been the honor of a lifetime," she stated. "I can think of no other organization that works with more integrity, more skillful staff, and more motivated board members, more valued partners, or general impact. After 11 years with OutRight, leaving will be bittersweet, but I know the organization could not be stronger."

Under Stern's leadership, OutRight underwent significant transformation and achieved meaningful and lasting impact, the release noted. Stern expanded the organization to establish a permanent presence at the United Nations, a Global Research Program, an Arabic Media Project, a Corporate Engagement Program, and a Caribbean Program. Moreover, Stern created a training and advocacy program for LGBTIQ activists, Advocacy Week, that has become a model used around the world.

Stern's vision was for OutRight to help LGBTIQ movements accelerate their progress by focusing on research, resourcing, and advocacy, the release stated. Guided by a conviction that LGBTIQ movements need research to advocate for law and policy change, Stern led OutRight's publication of landmark global reports documenting the impact of COVID-19 on LGBTIQ people and exposing the global reach of so-called conversion therapy — practices aiming to change sexual orientation or gender identity which are professionally repudiated as futile and damaging. Stern also focused on the under-resourcing of LGBTIQ movements and guided OutRight to create new resources for LGBTIQ activists, organizations, and allies on the frontlines. During her tenure, OutRight helped launch a dozen LGBTIQ organizations; trained over 1,000 LGBTIQ activists; and distributed millions of dollars in grants to LGBTIQ organizations, including creating the largest global LGBTIQ COVID-19 relief fund in the world, which has raised more than $4 million to support LGBTIQ communities in 80 countries.

Jennifer Pizer, the law and policy director for Lambda Legal Defense and Education Fund, is co-chair of OutRight's board of directors.

"The United States is emerging from four years of unreliable foreign policy, distortions of international human rights standards, and backs turned on LGBTIQ people domestically," Pizer stated. "In such times, LGBTIQ communities in the United States and around the world need and deserve a clear-eyed human rights champion to galvanize a wise reemergence of the U.S. government insisting on full human rights for LGBTIQ people everywhere. Jessica is that person. No one works with deeper commitment, greater integrity, or more skillful strategic vision on behalf of our global LGBTIQ family. We who know Jessica's talents best know what an immense positive impact she can have. This is an exciting new day for our global movement."

The White House stated that at OutRight Stern has supported the legal registration of LGBTIQ organizations globally, helped secure the mandate of the United Nations Independent Expert on Sexual Orientation and Gender Identity, expanded the U.N. General Assembly resolution to include gender identity, and co-founded the U.N. LGBTI Core Group. She has provided expert opinions to governments globally, regional human rights institutions, and U.N. mechanisms, including U.N. Women where she serves as a member of multiple leadership bodies.

In its release, OutRight noted that it has long advocated for the position of U.S. special envoy for international LGBTQI rights. First held by now-Ambassador Randy Berry during the Obama administration, the special envoy is the most senior State Department official focused on the full and equal inclusion of LGBTIQ rights in US foreign policy. OutRight noted the important message the Biden administration sends in countering lesbian invisibility by appointing a lesbian to this role.

"At a time when democratic institutions are under attack by authoritarian forces and the dangerous anti-gender movement, LGBTIQ people globally need the U.S. to invest in stronger LGBTIQ movements everywhere. As with all government officials, OutRight will look forward to holding the new special envoy accountable," the agency stated.

OutRight board co-chair Aalap Shah stated that the organization is prepared for the leadership change.

"OutRight today is a formidable organization that is deeply attuned to the diverse needs of LGBTIQ people around the world," Shah stated. "We have a clear vision, robust programs, a skillful deputy executive director, experienced staff, and a strong Board of Directors. We will continue to fight as part of the global human rights movement. Nothing will slow us down in our pursuit of human rights for LGBTIQ people everywhere."

Maria Sjödin is OutRight's deputy executive director who is expected to fill in during the interim. Stern's departure date has not yet been set.