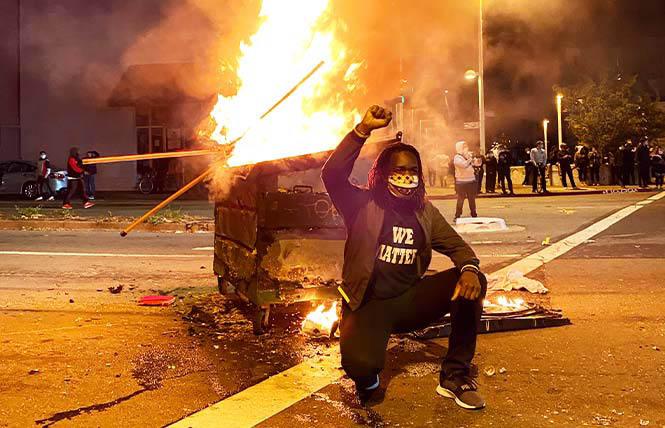 This photo of an Oakland Black Lives Matter demonstration accompanied Out in the Bay's June 16, 2020, edition. Photo: Truc Nguyen

We relaunched Out in the Bay-Queer Radio from San Francisco a year ago this week. Or at least that's when our first episode since 2015 aired on San Francisco Public Press' radio station, KSFP 102.5 FM, and was posted on podcast platforms.

But we — producers Truc Nguyen, Kendra Klang, and I — had started working on the relaunch in early 2020. Before March when COVID-19 changed everything; before May when George Floyd's videotaped killing at the hands of police changed still more things.

We didn't plan to relaunch during a global pandemic or during nationwide demonstrations over our country's history of systemic racism. Certainly not in the midst of both.

But there we were. Trying to make sense of it all and add meaning and a little comfort while confined mostly to our makeshift in-home studios. Nguyen though, was not deterred from going out with a face covering on to gather sound, comments, and images for our June 16, 2020 relaunch episode "Queer Response to Anti-Black Violence and Systemic Racism."

"Working on this show helped me stay connected to my queer community while in isolation, and to my queer identity while in an outwardly straight-looking relationship," said Nguyen. "In a big way, working with Out in the Bay kept me whole."

Klang said she feels Out in the Bay this past year "helped highlight how people were coming together to combat fear and isolation, and was able to give a platform to those working to support the community, fight injustice and work toward equality."

She lauded the "positive moments" — shows featuring those not just surviving, but thriving, like Breanna Sinclairé, a transgender opera singer, and first-time novelist Robert Jones Jr., author of best-seller "The Prophets" among them.

Our features dealing with COVID — especially its effect on mental health — resonated deeply, as did episodes on politics in the past politically tumultuous year.

But those that brought in music and joy were definitely popular too. Our March 8, 2021 feature "Big Freedia - No Guns, More Twerking!" — expertly edited by Porfirio Rangel — on the headliner of San Francisco's virtual 2020 Pride festival, garnered 3,573 website visits and we don't know how many radio and podcast listeners.

No wonder. Big Freedia's four songs featured on this episode are so danceable, who could resist? She also told our listeners about her life in New Orleans, her anti-gun activism after her brother's killing and being shot herself, and about the New Orleans' "bounce" music and twerking that she has helped spread around the world.

"Learning From Asexuals About Sex & Relationships," a discussion about asexuality with science writer Angela Chen, author of "Ace: What Asexuality Reveals About Desire, Society, and the Meaning of Sex," was a provocative surprise hit.

Despite pandemic challenges and a tiny budget, Out in the Bay has created 45 episodes from June 16, 2020 through today. In addition to those linked above, here are a half-dozen more staff faves that have received enthusiastic listener comments:

Searching for Intimacy During COVID

Forging a partnership with the Bay Area Reporter last October was a high point of the past year. The B.A.R. publishes a summary with audio links to Out in the Bay's weekly episode in its Friday online edition, and once a month Out in the Bay interviews a B.A.R. journalist. Conversations with political columnist Matthew Bajko and national politics and legal correspondent Lisa Keen have been popular.

Last November, NPR-affiliate KALW, 91.7 FM throughout the central Bay Area, welcomed Out in the Bay back to its airwaves at 10 p.m. Tuesdays. It had been Out in the Bay's broadcast home from 2004 through 2015. Early co-producers David Latulippe, Marilyn Pittman, and Susanna J. Hines helped establish Out in the Bay in its first years on KALW.

Eric Jansen is founding host of Out in the Bay - Queer Radio from San Francisco. Learn more and listen at https://www.OutInTheBay.org

Out in the Bay: Father-daughter duo makes form-fitting bikinis for trans girls
Sign up!