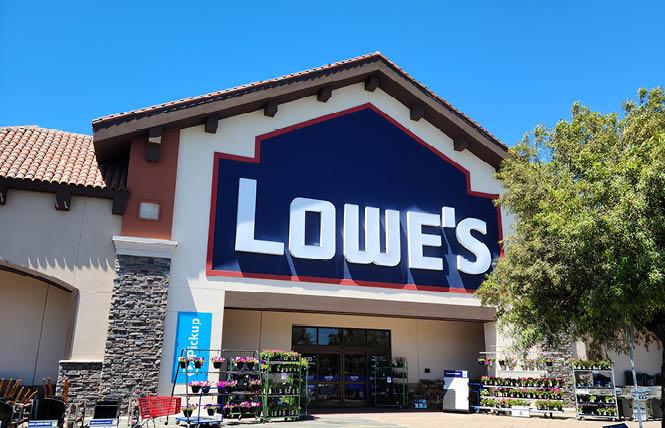 The civil suit was filed in Solano County Superior Court by a former assistant store manager who is listed in the complaint under the pseudonym John Doe. Doe claims after he started working at Lowe's in March 2019, he was subjected to harassment by a fellow employee and that when he complained to the store manager he was told that he himself could be fired. (The Bay Area Reporter is not naming that fellow employee because he has not been criminally charged.)

"In a conversation with Doe, [the man] stated that since he was tall, the size difference between him and another man would be 'fun' and that he would make another man 'spin like a top on [his] dick,'" the complaint states. "Doe told [the man] that he did not appreciate the explicit comments and that they made him uncomfortable. Ignoring Doe's admonition, [the man] later described his genitalia in detail to Doe and asked him whether he ever wanted to have sex with a man."

Kelly Armstrong, an attorney with the Armstrong Law Firm, which has offices in San Francisco, Oakland, and Sausalito, is representing Doe.

Doe declined to state his sexual orientation, according to Armstrong.

Armstrong told the B.A.R. that often sexual harassment against men in the workplace isn't taken as seriously as similar behaviors toward women.

"It is textbook sexual harassment," Armstrong said. "There's a double standard with men. It's taken more seriously when women report it, but thousands of men are experiencing sexual harassment on a regular basis, and are afraid to come forward. Men shouldn't be left behind in the time of #MeToo."

On other occasions, the man offered to take Doe on a trip to Las Vegas, where the two could share a room because it'd be more "intimate;" the man rated the physical attractiveness of fellow employees; the man offered to "choke and stroke" Doe; the man asked Doe if he wanted to try his "big kielbasa" at a work potluck, "motioning toward his groin;" and the man asked Doe if the latter wanted to try 'edging,' which the former said he "often practiced" himself, according to the complaint.

While sitting on a toilet, Doe suddenly received a text message with a picture of his own shoes taken from an adjacent bathroom stall, the complaint states.

"That your shoes?" the man asked in the message.

"Doe was shocked and mortified that [the man] would take a photo of him using the restroom and send it to him," the complaint states. "When Doe exited the bathroom and told [the man] that what he did was completely unacceptable, [the man] told him to keep his mouth shut or he would 'fuck up' Doe."

According to the lawsuit, the man later showed the photo of Doe using the restroom to multiple employees.

"In December 2019, Doe complained to store manager Dave Berlin about [the man's] inappropriate sexual conduct and photographing him twice without his knowledge or consent when he was in the restroom," the complaint states. "One of the photos showed Doe standing up with his legs spread and pants down in the restroom while using the facilities where his buttocks, scrotum, and penis were showing. The second photo was taken from underneath a bathroom stall when Doe was sitting on the toilet and showed the sides of his buttocks and thighs as his pants were down. [The man] showed the photos to multiple employees. Lowe's failed to take any action in response to Doe's complaints.

"Remarkably, when Doe complained to Berlin about [the man's] blatant violation of Lowe's Code of Business Conduct and Ethics, Berlin dismissed his complaint, told him to drop the issue, and warned that he could fire Doe any time he wanted to 'a hundred times over,'" the complaint continued.

"Later that day, [the man] approached Doe in the store and told him, 'You better drop your complaint or I'm going to fuck you up,'" the complaint states. "A Lowe's department manager overheard [the man's] threat but did not bother to ask Doe about the threat, much less investigate it or reprimand [the man]. At that point, Doe was so distraught by [the man's] treatment of him that he often broke down and cried as he drove home from work because he felt so humiliated and alone."

Lowe's allowed Doe to go on leave, but Berlin threatened Doe with termination if he did not return to work, the complaint states.

The day he finally returned, in the summer of 2020, turned out to be his last with the company.

"On the last day Doe reported to work, [the man] pulled him aside and reminded him that if he continued to pursue his harassment complaint, [the man] would 'fuck him up,'" the complaint states. "Doe requested to work at a different Lowe's location than [the man], but Lowe's refused."

That was the end of Doe's employment with Lowe's. The man continued to work there for several more months, according to the complaint.

"Every day I drove to work I lived in fear of the humiliation I would suffer once I arrived," Doe stated in a news release. "I lived and worked in fear, and Lowe's management did nothing other than threaten me, call me names, retaliate, and force me from my job. I was trapped between a paycheck I needed to survive during the pandemic and a workplace that traumatized me every day."

Armstrong said that the facts of the case are "particularly egregious."

"Our client complained so many times to so many different managers, including the vice president of human resources and the CEO," Armstrong said. "Despite repeated complaints, no one took action and he was threatened if he didn't stop his complaints."

Armstrong said that Doe is seeking damages for "significant emotional distress" as well as for "lost wages and benefits due to being discharged after trying to seek protection."

"Many harassment victims don't come forward because they are afraid of the repercussions," Armstrong added.

There are six total causes of action in the complaint: hostile work environment through sexual harassment, retaliation, failure to prevent harassment and retaliation, wrongful termination, invasion of privacy, and intentional infliction of emotional distress. The man is being sued personally in addition to Lowe's.

Lowe's settled earlier case
Armstrong said that the case is also particularly distressing because it's not the first time Lowe's has had a run-in with sexual harassment suits. A decade ago, the company settled a harassment suit for $1.7 million.

One of the terms of the settlement was a three-year consent decree requiring anti-discrimination training for all employees in the states of Washington and Oregon, according to the Seattle Times.

"Despite this consent decree we are disappointed and dismayed that in the year 2021 the highest levels of Lowe's are not taking sexual harassment as seriously as they should, especially in California," Armstrong said.