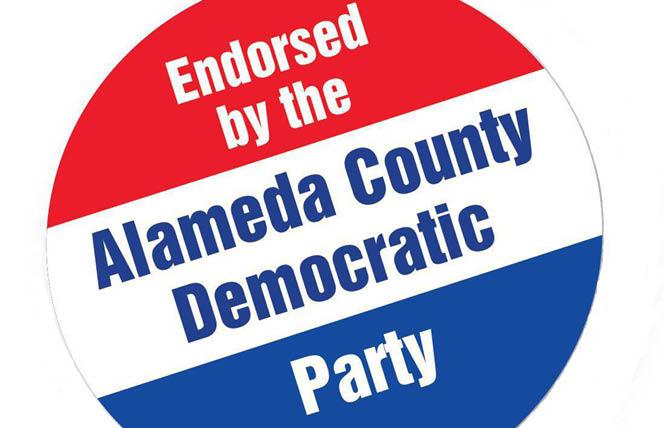 Leaders of the Democratic Party in Alameda County want to adopt a ban on endorsing anti-LGBTQIA+ candidates for elected office. They are crafting a rule that could forbid not only the county party but also local Democratic Clubs it charters from granting endorsements to candidates with anti-LGBTQIA+ stances.

How to define what makes a candidate anti-LGBTQIA+ still needs to be worked out by the members of the Alameda County Democratic Central Committee, who set the policies for the local party. Also unclear is if the endorsement ban would also cover a candidate who has personally endorsed another candidate who holds anti-LGBTQIA+ views or an elected official who adopted anti-LGBTQIA+ policies.

"Supporting LGBTQIA+ people is in the platforms of the Democratic Party, both the state party and local Alameda party. We need to make sure we are holding our elected officials accountable to those values," said central committee member Melissa Shuen-Mallory, a queer nonbinary femme who serves on the board of the New Haven Unified School District.

It is believed the Alameda Democratic Party would be the first local party in the state to adopt such an endorsement ban. The San Francisco Democratic Party, for instance, doesn't have a written rule that it won't endorse anti-LGBTQ candidates in its by-laws, nor does the California Democratic Party have such a policy in place.

Though former San Francisco Democratic Party chair David Campos, now second vice chair of the state party, told the Bay Area Reporter it would be impossible for a candidate who holds anti-LGBTQ views to secure the local party's support of their candidacy. He noted that the local party does state in its by-laws that is won't abide any form of discrimination, including that based on sexual orientation or gender identity.

"I would think, and I would hope, that as a general rule an anti-LGBT candidate would have a tough time being endorsed by any Democratic Party in California, whether it be the state party or a local party, I would hope," said Campos.

As for seeing the state party adopt a written rule banning endorsements for anti-LGBTQIA+ candidates, Campos wouldn't rule it out.

"I think it is possible the state party adopting a rule like this," he said. "With any by-law change, the devil's in the details and how it is phrased."

At their June 2 meeting the Alameda County central committee members adopted without dissent a resolution that states the local party "is encouraged not to support any candidate for elected office who has a history of opposing LGBTQIA+ rights or who will not make a firm commitment to support LGBTQIA+ rights in their intended office."

It also encouraged the local chartered clubs to follow suit and stated that either the local clubs or the county party "are encouraged to reserve the right to pull support of any candidate should the candidate present inappropriate actions or behavior towards the LGBTQIA+ community during their candidacy for any public office."

The resolution had been watered down from the initial one Shuen-Mallory and Lance Kwan, a gay central committee member who serves on the Ohlone College Board, had written. It had stated that the county party and the chartered local clubs "shall not endorse any candidate for elected office" with anti-LGBTQIA+ stances or won't affirm their support for LGBTQIA+ plus rights.

It was determined that such a policy could not be enacted by resolution and needs to be done via a bylaws change. Longtime central committee member Andy Kelley, a gay man who serves on the Berkeley rent board, pledged at the meeting Wednesday to draft the bylaw change proposal and return it for a vote by the central committee.

"There are two reasons why a bylaws change is needed. One because many of the LGBTQ members of the central committee and many allies want to make sure it is stronger than a recommendation and to really require our organization to do anything like to forbid a local club from making an endorsement requires a bylaw," explained Kelley. "Once it is put in the bylaws it becomes a permanent change, so a future board will have to respect the decision."

Asked about the resolution losing its teeth, Shuen-Mallory told the B.A.R. they "understood" that, procedurally, such a policy must be enacted via a bylaw change. They hope it will be adopted if not by the August meeting then when the central committee meets in early September.

Such a policy is needed, said Shuen-Mallory, to ensure the Alameda County Democratic Party does not endorse candidates who do not uphold or believe in the party's platform, particularly when it comes to defending the rights of LGBTQIA people.

"I think in Alameda County, because it is such a blue county, there is a lot of politicians who will register as Democrats just because it is easier to run as a Democrat and it is easier to win," they said. "If you receive the party's endorsement, it gives you a huge advantage because it comes with benefits like financial support and volunteers."

Bisexual Livermore City Councilwoman Brittni Kiick, who serves on the central committee, was a co-sponsor of the resolution and would like to see it become policy.

"I support it as an actual policy change because it allows us to truly hold ourselves accountable," she said. "We can pass a resolution that sounds nice, but if it is not policy it is harder to hold us and elected officials we endorsed accountable with future endorsements."

Should the endorsement ban be adopted then it would make it likely impossible for Fremont Mayor Lily Mei to secure the local party's support of her state Senate candidacy. She is running next year to succeed Senator Bob Wieckowski (D-Fremont) as he will be termed out of his Senate District 10 seat.

Mei was specifically mentioned during the central committee meeting as well as by several of the out members in interviews with the B.A.R. regarding the endorsement ban proposal. She did not immediately respond to requests for comment Thursday.

On her senate campaign website, Mei states, "Safe, welcoming communities embrace our diversity. I'll stand up for immigrants and communities of color, support LGBTQ civil rights, and a woman's right to choose."

Shuen-Mallory also pointed to Alameda County Supervisor David Haubert, who switched his party affiliation from Republican to no party preference. When he served as Dublin Mayor in 2019, Haubert initially voted against flying the Pride flag at City Hall during June to then switch his vote amid a fierce public backlash.

"People think the Bay Area is a safe haven for LGBTQIA+ people," noted Shuen-Mallory. "That is still not the case in communities and pockets where people are very homophobic and transphobic. It is important for us to keep pushing this forward and standing by our values."

A working group of central committee members is crafting the language for the bylaw change and how far it will go in terms of what actions will trigger an endorsement ban. Kelley told the B.A.R. he wasn't certain it would include the personal endorsements a candidate makes.

"Generally speaking, there isn't much of a problem with that," he said of there being candidates with anti-LGBTQ stances securing the support of elected leaders.

The bulk of the discussions, he said, will likely center on how to define if someone is anti-LGBTQIA+.

"You and I both know what an anti-LGBTQ person is," said Kelley. "But how do you define that and make it clear so there aren't ways to wiggle around a definition?"

Shuen-Mallory said they weren't thinking about the endorsements a person makes when they crafted the resolution but is open to including it in the bylaw if there is agreement for doing so amongst the central committee members working on the proposal.

"As a group we need to figure out how far we go with it," they said. "If we agree or reach consensus it should include who a candidate endorses then that is what we will bring before the central committee to change the bylaws."

Kwan told the B.A.R. that he hopes the bylaw change will be approved and favors including whom a candidate is endorsing in the bylaw change. He pointed to Mei's support of Fremont City Councilman Yang Shao, a former school board member, who will be up for reelection next year and has a history of making transphobic comments and opposed same-sex marriage.

"The impact is there is a definitive commitment from everybody who is a Democrat on the central committee and it filters to elected officials and Democratic clubs in Alameda County that yes, we are supporting the LGBTQIA+ community," said Kwan of the resolution that was passed. "On top of that there are repercussions if you actively endorse somebody who has a record of not being as such. Now the next step is to establish it as a hard bylaw."

Keep abreast of the latest LGBTQ political news by following the Political Notebook on Twitter @ http://twitter.com/politicalnotes.
Got a tip on LGBTQ politics? Call Matthew S. Bajko at (415) 829-8836 or e-mail m.bajko@ebar.com.