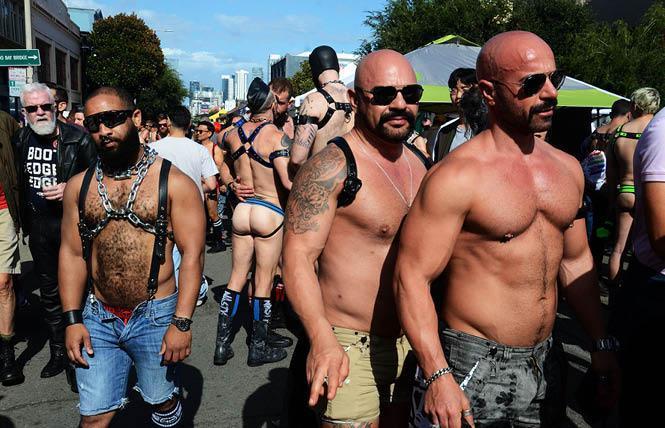 As the Bay Area and the state open up after more than a year of COVID-19 pandemic-related lockdowns and restrictions, LGBTQ street fairs are among those events that are back on.

The Up Your Alley and Folsom Street leather- and kink-focused fairs in the city's South of Market neighborhood will be proceeding with in-person gatherings, but in rebranded formats intended to help the neighborhood's LGBTQ businesses recover from the economic impacts of the pandemic.

"Our July event is going to be rebranded to Folsom Street Market, and will be vendor focused, but in the same footprint [as the Up Your Alley street fair]," Angel Adeyoha, the queer and nonbinary executive director of Folsom Street Events told the Bay Area Reporter. "We plan to bring back Up Your Alley, in all its sticky glory, next year."

Adeyoha said that Folsom Street Events hopes to partner with the city on providing COVID-19 testing and vaccines for the Folsom Street Market event, which will be Sunday, July 25. There will be no alcohol or food "because we want to support the bars and venues that have had an awful year," Adeyoha said.

On Sunday, September 26, Megahood 2021 will be held in lieu of the Folsom Street Fair. Megahood harkens back to the original name of SOMA's internationally-renowned kink and leather festival when it began in 1984.

Adeyoha said that Folsom Street Events has been receiving feedback from community members, some of whom expressed their concern that the fair had become too disconnected from the SOMA community. "Focusing on the grassroots" will be the theme of Megahood, Adeyoha said.

"We are trying to center — based on feedback in the last several years — those community roots," Adeyoha said. "We will be specially prioritizing marginalized members of our community, both in vendors and entertainment."

Folsom Street Events will also be partnering with Lava Mae to provide "on site showers and hospitality areas for houseless neighbors, because one thing our fair does that isn't great is it makes people feel pushed out of their neighborhoods."

The nonprofit will also be providing snacks and shade to the homeless.

Megahood 2021 will be bigger than the Folsom Street Market, just as the Folsom Street Fair is larger than Up Your Alley. There will be "more vendors" and "more booths," but alcohol and food will also not be served so that people can patronize SOMA establishments.

In the meantime, a series of smaller outdoor events called SOMA Second Saturdays launched in May. A second installment will be held between 9th and 10th streets on Folsom Street, and the dead-end block of Dore Alley on June 12 from noon to 5 p.m. (The first was held at only the dead-end block of Dore, which is between Folsom and Sheridan streets, adjacent to Powerhouse.)

"It's a way to start getting back to in-person events," Adeyoha said.

SOMA Second Saturdays, which is being put on in coordination between Folsom Street Events, the SOMA West CBD and the Leather and LGBTQ Cultural District, is a vendor, art and artisan fair. COVID-19 protocols will be enforced. The leather district touts "a safe, fun afternoon with Queer Art, Kinky Crafts, Local Artisans, Fun Vendors, Clubs and Organizations" on its website.

The Bearrison Street Fair, on Harrison Street, is a collaborative effort between the Bears of San Francisco and the Sisters of Perpetual Indulgence.

"There actually used to be a bear street fair on Harrison Street over a decade ago," said Erik Greenfrost, a genderqueer gay person who is the chair of Bears of San Francisco and the co-chair of the Bearrison Street Fair, referring to the Hairrison Street Fair that took place in the 2000s, as the B.A.R. contemporaneously reported.

Prior to the pandemic, Greenfrost and Desi Juana DeWitt, now a co-chair as well, thought of resurrecting the idea in coordination with the Sisters.

"We have so much talent, so much energy and so many events that the Sisters have done that have gone away — from Pink Saturday to Halloween in the Castro," Greenfrost said. "We had our initial meeting on the back patio of the Eagle to see who'd be interested, and we had a good turnout."

Throughout the pandemic, the idea for the fair marinated on the back burner. It was one of the first in-person events to be announced when COVID-19 restrictions began easing in early 2021.

"We are working closely with the city and are feeling optimistically hopeful," Greenfrost said. "COVID-related, flu-related, we want to take cues from the city, but this far we have not been asked to take any specific precautions.

Greenfrost told the B.A.R. the fair will be "a mask-friendly event" but shouldn't have a mandatory mask policy.

"We want to make sure everyone feels welcome and we will have opportunities for masking and social distancing, but ideally we won't have to require anything and folks can approach the street fair however they feel comfortable," Greenfrost said.

The epicenter of the fair is going to be Harrison and 11th streets, going one block in each direction, Greenfrost said. Heading toward Eagle Plaza, at 12th and Harrison, there will be a D.J.-dance area. Toward the east, there will be live acts. Toward the north, wrestling — both professional and collegiate levels — is planned.

"We look forward to working with the city in producing a large outdoor event that is safe and follows whatever public health guidelines are in place come October," DeWitt stated in a news release. "We hope that by October the pandemic will be under control and this can be an opportunity for folks to rekindle community as well as bring some business back to the city — especially to the historic Leather & LGBTQ Cultural District."

Oakland Pride gets 'tentative OK to have an in-person festival'
San Francisco Pride's usual parade up Market Street and Civic Center celebration will not be occurring this year, as the B.A.R. previously reported. Instead the highlight of the events will be movie nights being presented at Oracle Park June 11 and June 12.

Oakland Pride, however, told the B.A.R. that it is planning an in-person event September 12.

"So far we have the tentative OK to have an in-person festival," said Carlos Uribe, Oakland Pride's co-chair. "We are planning, coordinating and setting up the gears for an in-person festival. We are also going to be programming a digital component for Oakland Pride as well, for those for whom it's not safe to go to large gatherings, who are not vaccinated or who have an accessibility issue."

Uribe said that Oakland Pride expects more clarity "in the next coming weeks or in June" about what specifically will be allowed in person come September. Once Oakland Pride is able to have the necessary discussions with Oakland and Alameda County officials, it will make an official announcement.

"We are excited to come back this year for our community," Uribe said.

The Castro Street Fair, which usually takes place the first Sunday of October (one week after the Folsom Street Fair), did not take place either in-person or virtually last year Jenn Meyer, president of the Castro Street Fair board of directors, told the B.A.R. in a statement that she is "hopeful" about the prospects for an in-person gathering this fall.

"Castro Street Fair continues to monitor San Francisco health directives, and at this time does not have any event plans to announce," Meyer stated. "Limits imposed by the directives will determine any plans for a 2021 event. Organizers remain hopeful to produce a gathering in October that embodies the spirit of the nearly half-century tradition of the Castro Street Fair while ensuring public health guidelines are met."

Officials with Silicon Valley Pride, which usually takes place in late August, declined to comment for this story. Its website currently states that the annual parade and festival is planned for August 28 and 29, with a message for people to "save the date! Please stay tuned."

Updated, 6/17/21: This article has been updated with the correct date for Bearrison Street Fair.