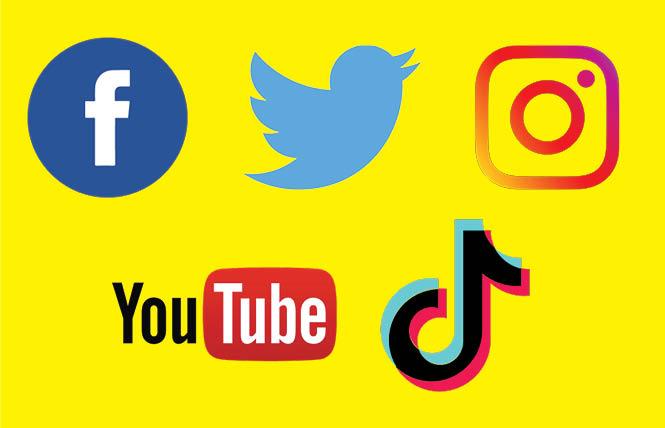 GLAAD recently announced the findings of its first-ever index of LGBTQ user safety on social media, determining that Facebook, Twitter, Instagram, TikTok, and YouTube are "effectively unsafe" due to harassment of, and misinformation about, the queer community.

The original plan had been to give each platform a letter grade, according to GLAAD, the New York-based LGBTQ media watchdog group, but this was scrapped when staffers realized that the leading social media platforms would have all received an F.

GLAAD President and CEO Sarah Kate Ellis stated that while other marginalized communities are being considered in conversations about the restriction and regulation of social media speech and other content, "the unique needs of LGBTQ people have largely been invisible or fall low on the priority list."

"The spread of misinformation and disinformation over social media is a leading barrier to full LGBTQ equality and acceptance," Ellis stated in a news release. "The tech industry must realize its obligation to protect LGBTQ users, and tech executives must harness their power as innovators to ameliorate the unsafe environments that have far too long persisted across social media."

The 50-page report's findings revealed that hate speech and harassment are "the most significant problem in urgent need of improvement," calling them "a public health and safety issue."

"The amount of dehumanizing and dangerous anti-LGBTQ hate on social media platforms is astounding," said Jenni Olson, a GLAAD senior project consultant, stated. "Research shows that social media companies have effective solutions they could be implementing, but they continue to prioritize profits over public safety. Ongoing pressure like GLAAD's Social Media Safety Index is necessary until LGBTQ people are safe on these platforms."

GLAAD also launched a listing of Anti-LGBTQ Online Hate Speech: a kind of compendium of anti-LGBTQ narratives and symbols on social media. This is modeled after the Hate Symbols Database of the Anti-Defamation League, which serves a similar purpose for racist, sexist, homophobic, transphobic and other prejudicial and hateful content in general.

The report found that LGBTQs face the most online hate and harassment of any marginalized group.

"To be clear, when we talk about online hate speech, we are not referring to the occasional epithet or even garden-variety homophobia — though that is also certainly part of it," the report states. "Have you ever heard the term Globohomo? CloverGender? LGBTP? Transvestigations? These are just a few of the many creative examples of new, dangerous, weaponized anti-LGBTQ content that circulate freely and widely across social media platforms causing online and offline harms for LGBTQ people and contribute to an overall atmosphere of disrespect, dehumanization, hate and violence."

"Globohomo" refers to a conspiracy theory that "traditional" cultures are being destroyed by a "corporate uniculture" (the "homo" refers alternatively to "homogenous" and "homosexual"); "CloverGender" is a non-existent sexual orientation that anti-LGBTQ posters pretend to be a part of, claiming they are sexually attracted to children but are not pedophiles; "LGBTP," similarly, is a non-existent addition of pedophiles to the acronym of the rainbow umbrella; and "transvestigations" refers to attempts to expose celebrities (such as Madonna and Mike Tyson) as secretly transgender.

The report calls on social media companies to change their algorithms, which drive people to click on content of ever-increasing extremes.

The report states that companies can use "the introduction of viral circuit-breakers, fact-check panels, labeling of posts, scan and suggest technology, [and] limiting auto-play of videos" to slow or counter that cycle.

"Given the extraordinary amount of ingenuity and resources social media companies have deployed in creating sophisticated algorithms so successfully focused on maximizing revenue, it is reasonable to suggest that this same brilliance should be applied to product safety for LGBTQ people, and for everyone," the report states, under a section titled "Elevate Legitimate Voices." "Platforms should especially implement tools and policies to efficiently elevate legitimate and diverse voices and to moderate extremists and reduce anti-LGBTQ misinformation, hate and threats of violence."

The San Francisco-based GLBT Historical Society, for example, has repeatedly had run-ins with Facebook over its posts. Last year, as the Bay Area Reporter reported, the social media giant censored a historic photo of a bare-chested trans Black man before reinstating it. The society had acquired a shirtless portrait by photographer Anderson Clark of Zion Johnson, a Black trans man who was president of the Lou Sullivan Society.

Terry Beswick, a gay man who's executive director of the historical society, stated his organization now avoids spending money to advertise on Facebook "due to related instances of censorship of photos and text that their censor systems find problematic, including photos of bare-chested trans men and leather men."

"But this also can happen with free posts, and we should not have to self-censor to avoid getting caught up in their algorithms," he added. "I'm glad that GLAAD is taking a stand against online bullying and hate speech, and I hope there can also be a focus on the effective erasure of queer content and identities on social media, which is also a form of discrimination that makes the internet less safe for our communities."

The GLAAD report states that the companies "should increase use of qualified human moderators to more accurately interpret legitimate use of LGBTQ terms and to distinguish legitimate accounts and posters from trolls and bad actors. The compan[ies] should make corresponding improvements to AI systems."

The index report was created by 11 individuals who formed "an advisory committee of thought leaders."

Companies respond
The social media companies each made statements to Axios, which broke the news May 10. They each reaffirmed their commitment to LGBTQ user safety.

"We believe deeply in the representation of and visibility for the LGBTQ+ community that GLAAD champions," Alex Schultz, the chief marketing officer and vice president of analytics for Facebook (which owns Instagram), said. "Finding the right balance between giving voice and taking action on harmful content is hard. This is why we partner with experts, nonprofits, and other stakeholders — like GLAAD — to try to get it right."

YouTube, which is owned by Google, stated it has made "significant progress" in recent years removing "hateful and harassing content."

"This work is ongoing and we appreciate the thoughtful feedback from GLAAD," an unnamed spokesperson stated.

Twitter stated that it is "committed to open dialogue to better inform our work to support LGBTQ safety."

TikTok, a Chinese-owned video sharing service that began in 2016 and has exploded in popularity in the United States more recently, affirmed it is "committed to supporting and uplifting LGBTQ+ voices on and off the platform."

"We care deeply about fostering a welcoming and supportive experience for everyone," an unnamed TikTok spokesperson stated. "We share GLAAD's dedication to the safety of the LGBTQ+ community and will continue working with GLAAD and other LGBTQ+ organizations to help inform and strengthen our work."

Due to the Memorial Day holiday, the column will return June 8.