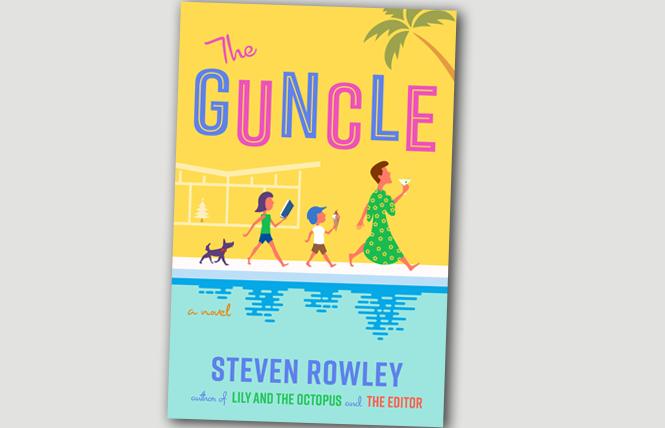 What's the role of a gay uncle? "The Guncle" suggests possibilities, dishing out lots of laughs as a guncle, his niece, and nephew deal with deep past and current grief.

Steven Rowley reads — dramatically — from his latest novel and discusses its "Auntie Mame" genesis on this week's Out in the Bay - Queer Radio. It's a heartwarming, humorous work of fiction about a once-famous sitcom star whose unexpected family tragedy leaves him with his 9-year-old niece and 6-year-old nephew for the summer.

Gay Uncle Patrick, or "GUP" as his family calls him, helps his young charges work through their grief with love and nonstop wit. And for himself — although he offers them to the kids too — plenty of mimosas. Amid the summer pool parties, bike rides and sleepovers, Patrick gains insights into his own grief and life, too.

Guncle Patrick is a tribute to, and re-imagining of, his namesake, "Auntie Mame" author Patrick Dennis and Mame's nephew Patrick, the boy Mame cares for after his parents' death, in Dennis' 1955 novel. "This is my 'Uncle Mame,' if you will," Rowley explained.

A running amusement is Patrick's growing list of "Guncle Rules" he declares for the kids, like "Brunch is splendid," "Know your angles," and "If a gay man hands you his phone, look only at what he's showing you. Don't open any apps!"

"Anyone who fashions himself after Auntie Mame will come loaded with a certain amount of bon mots," said Rowley, and Patrick packages many for the kids as Guncle Rules.

"One of my favorites is 'Bottomless Mimosas' is not the same as 'Pantsless Mimosas,' and he goes on to say he can't count the number of restaurants he's been kicked out of for not knowing the difference." Although most Guncle Rules Patrick conjures up to make the children laugh, there are "surprising nuggets of wisdom" and life lessons, Rowley said.

"The Guncle" has been named one of O, the Oprah Magazine's "32 LGBTQ Books That Will Change the Literary Landscape in 2021" and is topping summer reading lists.

Two of Rowley's previous novels, "Lily and the Octopus" and "The Editor," about a young gay writer who befriends Jacqueline Kennedy Onassis during her "incredible third act" as a book editor, said Rowley, are being made into films.

Hear more from author Steven Rowley on this week's Out in the Bay - Queer Radio from San Francisco. The program airs 9:30 a.m. Saturday, May 22, on KSFP, 102.5 FM in SF only, and is available anytime, anywhere on Out in the Bay's website. Out in the Bay also airs at 10 p.m. Tuesdays on KALW, 91.7 FM throughout the Bay Area.

A Great Good Place for Books in Oakland will be hosting a virtual event with Rowley (in-conversation with Angela Kinsey from "The Office") Thursday, May 27, at 7 p.m. Pacific Time over Zoom. More information is here.

Eric Jansen is founding producer and lead host of Out in the Bay-Queer Radio from San Francisco. Learn more and listen at https://www.outinthebay.org/

Out in the Bay: Drag Racer Rock M. Sakura seeks superpower and responds to anti-Asian violence
Sign up!