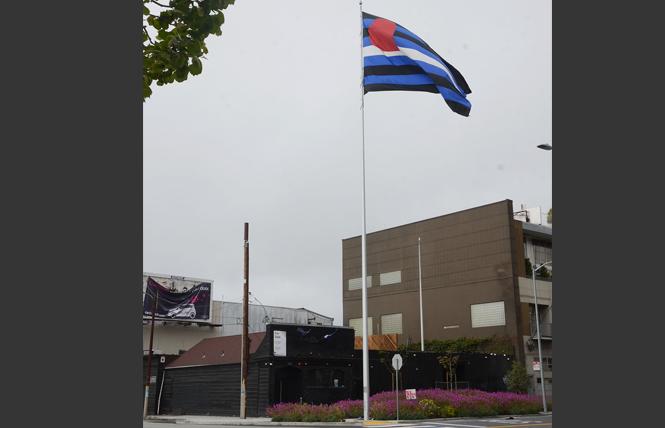 A San Francisco historic advisory panel is recommending that city officials landmark the South of Market Eagle bar for its importance to the leather and LGBTQ communities. It is set to become the eighth property in the city with ties to LGBTQ history to be designated a city landmark and the first related to leather history.

San Francisco Planning Department staff had deemed the local Eagle that first opened in 1981 at 396-398 12th Street worthy of being designated a city landmark, as the Bay Area Reporter first reported last week. In a report released ahead of the May 19 meeting of the city's Historic Preservation Commission, the planners noted the gay-owned venue is one of the longest operating LGBTQ bars in the city.

The planning department called the venue "a cornerstone for San Francisco's South of Market (SoMa) Leather and LGBTQ communities."

The Historic Preservation Commission unanimously voted 7-0 Wednesday in support of landmarking the bar. Commissioner Kate Black noted she attended fundraisers at the Eagle in the 1980s and early 1990s when she served on the board of an AIDS nonprofit.

"One of the clear messages I kept reading was how a lot of people moved here to San Francisco because they wanted to live as they wanted to, and the Eagle was one of the first places they felt at home," said Black of the numerous letters in support of landmarking the bar sent in by members of the public.

Gay commissioner Jonathan Pearlman also recalled attending Sunday beer bust fundraisers at the bar on behalf of AIDS agencies he was associated with after moving to San Francisco in 1989. The 1,400 square foot patio is believed to be one of the largest such outdoor spaces in city, according to the planning report.

"Landmarking this building makes me happy to be a San Franciscan. I came to San Francisco as a gay man to live my life as I wanted to," recalled Pearlman.

He deemed landmarking a building use like the Eagle bar "somewhat revolutionary" because of the role it has played in the leather and LGBTQ communities the last four decades.

"This has implications for communities across the globe to recognize the inherent diversity of humans, of all of us," said Pearlman, whose tenure on the panel is expected to end when Mayor London Breed names a new person to serve in his seat.

Commissioner Chris Foley noted how a close gay friend of his from when he lived in Indiana often came to San Francisco for vacations and frequented the Eagle bar until his passing from AIDS.

"I found it amazing it has been around 40 years," said Foley, the parent of a lesbian teenage daughter.

On to Board of Supervisors
The Board of Supervisors in February approved the landmarking process for the roughly 5,153 square foot, irregularly-shaped rectangular lot at the corner of 12th and Harrison Streets. Now that the Historic Preservation Commission has weighed in on the matter, the supervisors' land use and transportation committee will hold a hearing in the coming weeks on the landmark designation.

Afterward, the full board would need to vote two times in support of landmarking the Eagle before sending it to Breed for final approval. It would become official 30 days after Breed signs the landmark designation ordinance, ensuring any redevelopment plans for the site would receive heightened scrutiny by city officials.

As the B.A.R. first reported last year, District 6 Supervisor Matt Haney instigated the landmark process for the Eagle after the property was put up for sale. It has yet to sell, and as indicated in the planning landmark report, questions remain on who owns the corner parcel at the intersection of 12th and Harrison Streets.

Staff also noted they emailed Nikitopoulos in late April about the May 19 hearing. Yet the packet included no response from either Oglesby or Nikitopoulos.

Montiel and his late friend and business partner Mike Leon reopened the Eagle in 2013, two years after its previous owners had closed it. It remains shuttered due to the COVID pandemic.

"I would definitely like to express my voice to have you consider the recommendation for the landmark designation of the San Francisco Eagle bar due to its history and importance to the community," said Montiel, who has expressed interest in buying the property, during the commission hearing.

The bar has lent its name to the newly built Eagle Plaza public parklet on a portion of 12th Street that honors the local leather, kink, and LGBTQ communities. It will be the sixth location in the city designated a local landmark solely for its ties to LGBTQ history and the first to be located in SOMA.

And the third gay bar location to be landmarked, as the Twin Peaks bar in the Castro and the former Paper Doll restaurant and bar site in North Beach are already city landmarks. The former home to the AIDS Memorial Quilt on upper Market Street in the Castro and the late gay supervisor Harvey Milk's residence and former Castro Camera shop at 573 Castro Street are also city landmarks.

In mid-June the Noe Valley home of the late lesbian pioneering couple Phyllis Lyon and Del Martin will become an official city landmark. Gay District 8 Supervisor Rafael Mandelman authored the resolution unanimously supported by the Board of Supervisors and the mayor that landmarked the Lyon-Martin House at 651 Duncan Street.

The Japanese YWCA/Issei Women's Building at 1830 Sutter Street will also soon become an official city landmark as the supervisors and mayor recently approved granting it such status. The Japantown Y site was where the pioneering gay rights group the Mattachine Society hosted its first convention in May 1954, and the late gay African American civil rights leader Bayard Rustin taught at one time.

The seventh city landmark with ties to LGBTQ history is the Women's Building at 3543 18th Street in the Mission. A group of women that included a number of lesbian leaders founded it in 1971 and moved into the current location in 1979, where numerous meetings of LGBT groups and conferences have taken place over the years.