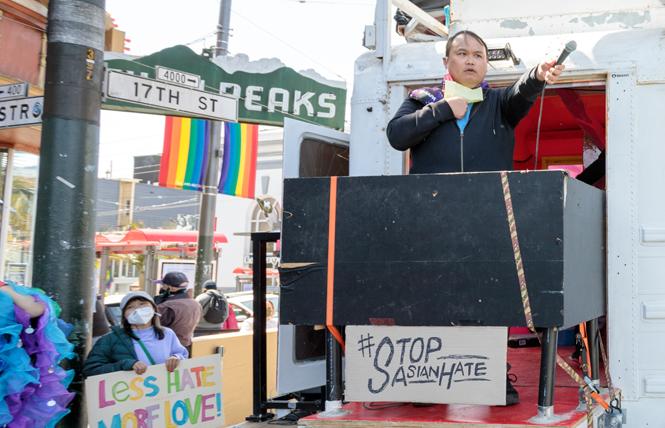 GAPA Chair Michael Trung Nguyen spoke at one of the recent rallies in the Castro against Asian American and Pacific Islander hate. Photo: Kevin Zhou

San Francisco will mark the country's first Queer and Transgender Asian and Pacific Islanders Week this month with a series of events between May 22 and 29. Organizers are already planning for more cities, especially in the Bay Area, to follow suit next year.

The seven days of rallies, panel discussions, and a drag show will also see the launch of a new project aimed at ending transphobia within the LGBTQ+ Asian and Pacific Islander community. The QTAPI Week comes amid an uptick in violent attacks and harassment of Asian Americans and Pacific Islanders during the COVID pandemic.

As the Bay Area Reporter's Political Notebook was first to report last week, leaders of the GLBTQ+ Asian Pacific Alliance, which recently held several rallies in the city's LGBTQ Castro district to protest the rise in AAPI hate, and the Bay Area QTAPI Coalition came together to propose the inaugural QTAPI Week. GAPA Chair Michael Trung Nguyen told the B.A.R. the dates were purposefully chosen so the week fell within Asian Pacific American Heritage Month and ahead of Pride Month in June.

He also wanted it to start on May 22, as it coincides with the annual observances of Harvey Milk Day, a day of special recognition in California timed to the birthday of the late gay San Francisco supervisor. QTAPI Week kicks off at 11 a.m. Saturday at Jane Warner Plaza on 17th Street at Market and Castro streets in the Castro, where Milk lived and represented at City Hall. Speeches and entertainment will also be held throughout the day at the public parklet in celebration of Milk Day.

"I felt it was important for this kind of visibility for queer Asians and Pacific Islanders to be within API Heritage Month. When I was looking at the dates and saw Harvey Milk Day, I said we should pick it as a start because he was a great gay elected official," said Nguyen. "All marginalized communities have lots to learn from each other and do knowledge transfer. For folks who lie at the intersection of two different identities — Asian and Pacific Islander and queer or transgender — we see both sides and come on multiple paths here."

Anjali Rimi, president of Parivar and co-founder of the Bay Area QTAPI Coalition, noted that, "As a South Asian woman of trans experience, I have often had to navigate out of my cultural identity to ascertain my gender identity. I am grateful for the visibility for QTAPI folx in the city of San Francisco and to be able to bring my whole self to this world."

At the request of gay District 8 Supervisor Rafael Mandelman, who now represents the Castro neighborhood, the Board of Supervisors unanimously voted Tuesday, May 18, to adopt a resolution officially declaring May 22-29 as QTAPI Week in the City and County of San Francisco. He noted it was fitting for the city to be the one to establish such a week due to its being home to a number of LGBTQ trailblazing groups and individuals.

Among those Mandelman pointed to were Margaret Chung, the first American surgeon of Chinese descent who wore "mannish attire" and was romantically linked to several women, and Crystal Jang, the first openly gay Asian lesbian teacher in the San Francisco Unified School District who conducted the first LGBTQ issues trainings for the city's public schools in the 1970s.

"This resolution will make ours the first city in the country to honor the queer and trans API community with a designated week of celebration and recognition. Amid a spate of heinous anti-AAPI attacks in San Francisco and around the United States, and with state legislatures across the country targeting the LGBTQ+ community — and trans community in particular — this will send a strong message of support and solidarity to QTAPI people everywhere," said Mandelman.

In conjunction with QTAPI Week the Dragon Fruit Network of API Equality-Northern California is launching the Queer Asian and Pacific Islanders Cis Allies Project May 23. The project, whose acronym QAPICAP is pronounced "Kappy-Cap," is an intergenerational project to help cisgender LGBTQ+ API people unlearn and end transphobia within their community. A Zoom discussion will take place from noon to 2 p.m. Sunday.

Nguyen, an attorney, will be in conversation with fellow lawyer Alexander Chen, a trans man who is the founding director of the Harvard Law School LGBTQ+ Advocacy Clinic, from 6 to 7:30 p.m. Wednesday, May 26, in a Zoom event presented by the Asian American Bar Association. The two first met in the Bay Area when Chen was an Equal Justice Works Fellow at the National Center for Lesbian Rights.

The closing event for QTAPI Week will take place from 11 a.m. to 4 p.m. Saturday, May 29, in the 18th and Collingwood parking lot in the Castro behind the Walgreens. It will include a live DJ, performances, and more celebrating API Pride.

Having grown up in Texas within the Vietnamese American community, Nguyen told the B.A.R. that he often felt alone and isolated growing up gay. No one like himself was in the media, and he felt pressure to conform to societal norms while being told being gay was wrong. With QTAPI Week, Nguyen is looking to upend that messaging and foster connections among LGBTQ API people.

"I would hope that folks take away a sense of belonging and that there is a community out there for them," he said. "I feel a lot of queer and trans Asians and Pacific Islanders have feelings of isolation and feelings of loneliness."

As became Milk's mantra that people need to be given hope, Nguyen sees QTAPI Week as offering a sense of hope. He would like cities across the country to replicate the event in 2022 and plans to push for Bay Area cities like Oakland and San Jose to do so.

For young API LGBTQ people in particular, Nguyen said he hopes the week carries the message that, "You can get through high school and can get through college and live a life of dignity and your true self."
For more information about the QTAPI Week events and how to join the virtual programs, including a gamers' night and drag show, visit its Facebook page at https://fb.me/e/XoaqM0wo.