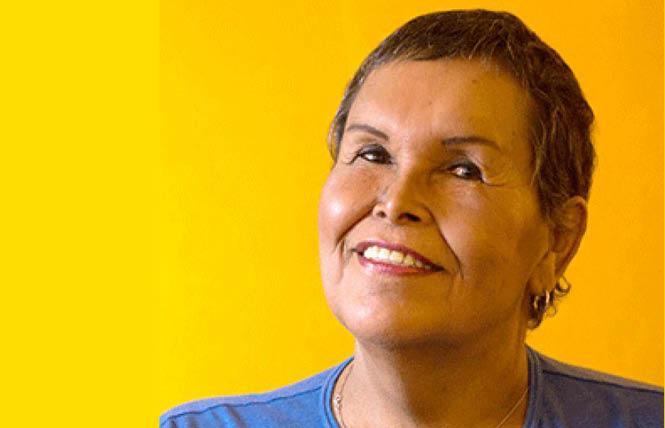 Felicia "Flames" Elizondo, a transgender woman and longtime AIDS survivor, died Saturday, May 15. She was 74.

According to friends and social media posts, Ms. Elizondo was in hospice care in San Francisco at the Veterans Administration Hospital.

Ms. Elizondo was a fixture in the San Francisco LGBTQ community for many years.

"What I remember about Felicia are her performances and how giving she was of her time and energy," Luis Gutierrez-Mock, a queer trans man, told the Bay Area Reporter in a phone interview. "She was always down to raise money for friends, HIV prevention, and the trans community."

Gutierrez-Mock said that he and Ms. Elizondo organized the San Francisco Trans March for many years.

Gutierrez-Mock said that Ms. Elizondo performed at various events and was a staple at Aunt Charlie's Lounge on Turk Street.

"I acknowledge Felicia was part of the generation before me and did what she needed to do to survive and cultivate love and build other family connections," Aguirre, who is the manager of the Castro LGBTQ Cultural District and board chair of the GLBT Historical Society, told the B.A.R. in a phone interview.

"I got to San Francisco in 1987 and she and Teresita, La Campesina, I met pretty quickly, Aguirre said, referring to their queer mother's sister. "Later, I connected with Elena with the Names Project Foundation - she worked on many AIDS quilt panels."

Ms. Elizondo frequented Compton's Cafeteria, which was part of a chain of eateries owned by Gene Compton, located at 101 Taylor at Turk Street in San Francisco, from the 1940s to the 1970s.

In 1966, there was a riot at Compton's, when the LGBTQ community came together to defy discrimination. The riots took place three years before the more famous Stonewall riot in New York City. The exact date of the riots is unknown.

"It was a hangout for the transgender community," Ms. Elizondo told the Bay Area Reporter in a 2015 interview when she was recognized as a lifetime achievement grand marshal by the San Francisco LGBT Pride Celebration Committee. "At that time transgender people were not welcome in most gay bars. Police used to arrest and harass transgender people at that time because cross-dressing wasn't legal."

Even though Compton's was open 24 hours, it decided to start closing at midnight to stop transgender people from socializing there. Ms. Elizondo noted that this policy change led to a demonstration, and the San Francisco police were called because some of the transgender demonstrators allegedly were making disturbing and loud noise.

After the police arrived they started arresting transgender people. But one of the transgender women threw her coffee in the face of one of the officers. That is when the situation escalated and the violence spilled out into the street, Ms. Elizondo said at the time. Windows were smashed, chairs and dishes were flying, and many people were arrested that night.

Most of the people involved in the riot were members of Vanguard, a gay youth organization in the United States, according to the Safe Schools Project, which provides resources for queer youth and educators in Santa Cruz County.

"What makes this incident unusual is that the news at the time never reported on the riot," Ms. Elizondo said. "Compton's Cafeteria was fixed up and back to normal business the next day as if nothing had happened."

The next night more transgender people and other members of the LGBTQ community came together to picket Compton's Cafeteria, demanding that transgender people be allowed back into the establishment. The newly replaced windows were smashed again, and the protests went on.

"I continue to hold the torch for all who fought in the 1966 Gene Compton's Cafeteria riots, making sure they are not forgotten," said Ms. Elizondo, who is featured in "Screaming Queens: The Riot at Compton's Cafeteria," a 2005 documentary on the protest that was co-directed by Susan Stryker, a trans woman and historian who now teaches at Mills College in Oakland.

Over the years, Ms. Elizondo at times claimed she was present at the Compton's riot, and that was reported in the 2015 B.A.R. article. However, Stryker and her co-director, Victor Silverman, noted that in their film, Ms. Elizondo said that she was serving in the military in Vietnam between 1965-1967.

"I want to honor Felicia as a foremother, a community elder, a person who lived a hard life and lived it well," Stryker wrote in an email. "I have compassion for her desire to have the significance of her actual lived history honored and remembered. I think she was understandably hungry for recognition of her strength, resilience, survival, and fierceness. And when 'Screaming Queens' became a bigger 'hit' than any of us connected with making it dared imagine, and the Compton's Cafeteria riot became part of queer collective memory as a result, I think she was smitten at being in the spotlight in a perhaps unexpected way.

"The way the film was edited, it allowed viewers to imagine that Felicia was there even though she never says so explicitly on screen, which in turn allowed Felicia to make the claims she sometimes made, and sometimes recanted, on and off over the past 15 years," Stryker added. "I don't begrudge her in the least that yearning for presence, the need to feel seen."

In an email, Silverman confirmed Stryker's account. "It is a sad day for the community," he wrote after Ms. Elizondo's passing. "She played an important role not only in the period portrayed in the film but in the years after on the streets and in the bars of the Tenderloin. Despite a tough life, her spirit was irrepressible. Her powerful energy led to her own liberation and to the community's survival. She fought for herself and for all of us. In that sense, she was true to the bigger meaning of the Comptons' riot."

Ms. Elizondo is also featured in the new FX series "Pride," which premiered May 14. Gutierrez-Mock said that Ms. Elizondo was also in "Tenderloin: Forgotten History," a 2011 documentary short, according to IMDb.

Another project that Ms. Elizondo was involved with was renaming a portion of Turk Street after the late Vicki Marlane, a longtime transgender performer who died in 2011. It was the first time a San Francisco street had been named after a trans person. Then-supervisor Jane Kim, who represented the Tenderloin at the time, was the main sponsor in 2014.

"Working with Felicia to name the stretch of Turk between Taylor and Jones as Vicki Mar Lane was magnificent," Sue Englander, a longtime friend of Ms. Elizondo's wrote in a Facebook message. "She persisted to make this happen and to stand as a tribute to all trans drag queens. What a woman!"

LGBTQ seniors
More recently, Ms. Elizondo was featured in a piece onLGBTQ seniors forming families of choice. The article, a collaboration between the B.A.R. and Next Avenue, a digital publication covering aging issues from Twin Cities PBS, discussed how queer seniors were coping with staying home last year during the COVID pandemic.

Ms. Elizondo had long lived by herself in a former motel turned apartment building in San Francisco's Lower Haight neighborhood. Other than going out early in the morning to run errands on occasion or taking her dogs for walks, she was largely housebound last year. Local nonprofits delivered food for both her and her dogs, limiting Ms. Elizondo's need to go to stores. Being HIV-positive, Ms. Elizondo took greater precautions to limit her risk of contracting COVID-19.

"I have always been very active and involved in my community," she said at the time. "It just is not the same anymore. I miss the freedom that we had, but I am dealing with it. I am OK."

Prior to the pandemic, Ms. Elizondo performed with her musical drag group, the Tenderloin Queen's Revue. During LGBTQ Pride Month in June and throughout the holiday season, the group traditionally performed drag shows at venues accessible to older LGBTQ people, like SteppingStone Adult Day Health Care. The shows were meant to reach especially those unable to attend Pride events on their own or for those without family visiting them at Thanksgiving or the December holidays.

One of those who participated in the shows with Ms. Elizondo was Bobby Ashton, who described himself as a performance artist and a male performer at Aunt Charlie's.

"We hung out quite a bit for a long time," Ashton told the B.A.R. in a phone interview. "She contacted me six or seven years ago to get involved with the senior center shows."

Ashton said that he admired his friend. "She wanted the world to know about the transgender family," he said.

Ms. Elizondo also helped her friends, as noted in the story. Jasmine Gee, another trans senior living in San Francisco, didn't have a TV so Ms. Elizondo spearheaded a crowdfunding effort to buy her a television and an antenna to access a host of local stations and channels for free.

Gee had also met Ms. Elizondo at Aunt Charlie's, she stated in an email, explaining that friends Michelle Alcedo and Sue Englander introduced them in about 2009. The two were later teamed up in 2013 through the Friendly Visitor program at Openhouse, a San Francisco-based agency that provides services to older LGBTQ people. Ms. Elizondo briefly served on the San Francisco Department of Aging and Adult Services Commission after being appointed to the advisory body in 2019 by Mayor London Breed and also had a short stint on the San Francisco LGBT Aging Policy Task Force in 2012.

Breed was among those who were able to visit Ms. Elizondo in hospice before she passed away, her spokesman confirmed.

Knowing she was different didn't comfort her when she was young, Ms. Elizondo said. "I was in the 12th grade and I left because I was being bullied," she said.

Ms. Elizondo had a long resume of previous jobs.

"I have been a clerk, a nurse's aid, a receptionist, a long-distance operator," she said in 2015. She also worked as a customer service representative for Goodwill, and had stints at Los Gatos Community Hospital, Santa Clara Valley Medical Center, and Catholic Charities.

She also was a Vietnam veteran, having served in the Navy.

Over the years Ms. Elizondo, by her calculation, made 80 panels for the AIDS Memorial Quilt, she said in 2015, and has helped raise funds for various LGBTQ-centered nonprofits, including Project Open Hand, Shanti Project, and the San Francisco LGBT Community Center.

Friends are planning a celebration of Ms. Elizondo's live though more details are not yet available.

Updated: 5/17/21: This article has been updated with additional information and comments. 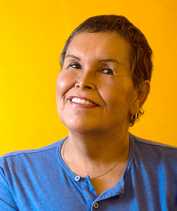