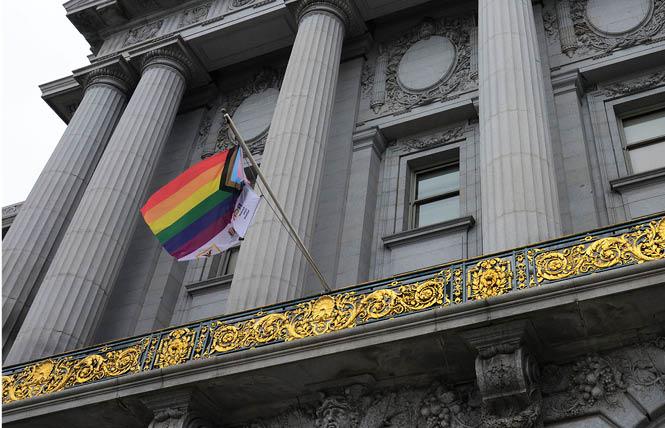 San Francisco and Cork, Ireland officials will raise twinned versions of the Progress pride flag at their city halls this Sunday, May 16, in observance of an international day that raises awareness about LGBTQ issues. For the sister cities since 1984, it is the first time that version of the Pride flag will fly at their city halls.

And it is also the first time either municipality has worked in tandem with another city to simultaneously raise the LGBTQ symbol at its city hall. The flag-raisings will take place prior to the International Day Against Homophobia, Transphobia, and Biphobia, which is observed May 17 in scores of countries around the globe.

With San Francisco City Hall still closed due to the COVID pandemic, a few staff from the Mayor's Office of Protocol will gather Sunday at 10 a.m. to raise the specially designed Progress flag that Cork officials had made and priority mailed to their American counterparts earlier this week. Cork officials will raise their version of the flag at the same time — 6 p.m. in Ireland — as the city hosts a weeklong series of events timed to the annual global LGBTQ observance.

Running from Sunday through Saturday, May 22, which is observed as Harvey Milk Day in California in honor of the late gay San Francisco supervisor, Cork's LGBTQI+ Awareness Week this year will feature a weeklong special rainbow-themed billboard campaign dubbed "We Are Cork," a book club, online photo exhibit, and participation in the UNESCO Virtual Global Conference Promoting the Rights and Inclusion of LGBTI Youth. (To learn more about the confab being hosted by France, click here.

"I'm delighted to raise this progressive intersectional flag over Cork, signifying our desire to be inclusive of the many diversities within the LGBTQI+ community," stated Councillor Joe Kavanagh, whose one-year term as the Lord Mayor of Cork City Council will come to an end in June.

Kavanagh added in an emailed statement to the Bay Area Reporter that he is "especially pleased that our friends in our sister city San Francisco" will also be raising the flag so that together the two cities will be "ushering in IDAHOBIT Day and committing ourselves to challenge prejudice and discrimination around sexual orientation, gender identity and all forms of intolerance and hatred."

San Francisco Office of Transgender Initiatives Executive Director Clair Farley, a trans woman who is also a mayoral adviser, told the B.A.R. that the city is "delighted to receive such a wonderful gift from Cork City." Its Progress flag will fly for 24 hours on the flagpole off the mayor's balcony on City Hall that faces the Civic Center. The building will also be lighted in the colors of the rainbow flag that evening.

"It symbolizes our desire to continue to work together on issues of LGBTQ inclusion and equality, both as sister cities and hopefully in the future as members of the Rainbow Cities Network," said Farley.


Daniel Quasar designed the Progress pride flag in 2018 by combining versions of the Philadelphia and the transgender pride flags. The Philly version includes black and brown stripes at the top of the flag in addition to the standard six colors of the rainbow.

SF, Cork joined global network
As the B.A.R. reported at the time, in April 2018 San Francisco and Cork became the first cities in their countries to join the global network of municipalities committed to protecting the rights of their LGBTQ citizens. During a visit by an Irish sister city delegation led by Tony Fitzgerald, then serving as Cork's lord mayor, he and former San Francisco mayor Mark Farrell signed a memorandum of understanding for the two cities to become official members of the Rainbow Cities Network.

This year, under its Share the Rainbow initiative, the Rainbow Cities Network asked its members to send a rainbow flag to one of their sister cities and raise it for the IDAHOBIT celebrations. According to the organization, at least 11 of its members have done so for 2021.

As Cork's Lord Mayor Kavanagh noted, "Our joint raising of the intersectional progressive flag is a chance to re-connect as we begin to re-emerge from COVID-19."

With their sending San Francisco the specially made Progress flag this week, Cork officials are returning the favor they received in 2013 when the late San Francisco mayor Ed Lee gifted the Irish city a rainbow flag. They raised it at Cork's city hall in 2014, becoming the first city in Ireland to formally fly the rainbow flag from a civic or public building.

"I'm thrilled that both Cork and San Francisco will raise this progressive rainbow flag jointly; when we agreed to become part of the Rainbow Cities Network Share the Rainbow initiative there isn't any other city that Cork would rather share a rainbow with, and I suppose there's a lovely symbolism in that the gift of a Rainbow Flag from Mayor Lee in 2013, raised in 2014 helped us create a little bit of history here in Ireland so we are returning that lovely gesture," wrote Siobhán O'Dowd, a lesbian who chairs Cork's LGBT Inter-Agency Group and was part of the 2018 sister city delegation, in an emailed response to the B.A.R.

The version of the Progress flag that Cork designed will be flying at various locations throughout the Irish city this week. The idea for it came out of the city's participating in the Rainbow Cities Network Intersectionality in the LGBTQ Community exhibition, explained O'Dowd. The city's LGBT group adopted intersectionality as this year's theme for its LGBTQI+ week, leading it to commission the Progress flags with the logos of the sister cities and the Rainbow Cities Network on them to demonstrate their strong connections, she added.

"We knew as an inter-agency group that we needed to so much more on intersectionality and already this has provided much needed discussion and questions such as why is this flag different?" wrote O'Dowd. "The progressive flag will fly across the city in public offices, community spaces at our hospitals and naval base, so we hope it provokes questions and discussion and greater understanding wherever it is raised."

In addition to raising the special Progress flag Sunday, Cork will also be raising a European rainbow flag it received from Cologne, Germany, another of its sister cities. It is part of the Pulse of Europe campaign, explained O'Dowd, noting that version of the rainbow flag supports the rights all minorities in Europe, especially LGBTQ minorities.

Traditional rainbow flag in SF in June
Because of the protocols San Francisco officials put in place due to the health crisis, they are not holding a public ceremony Sunday when they raise the special Progress flag. It will come down Monday at 10 a.m., said Farley, as the city is planning to raise the traditional version of the rainbow flag at a community event Monday, June 7, when City Hall reopens to the public for the first time in more than a year.

That version of the Pride flag, with its six colored stripes that the late Gilbert Baker turned into an international LGBTQ symbol, will remain up throughout June in recognition of Pride Month. A livecast of that flag-raising ceremony is being planned for those unable to make it in person, Farley told the B.A.R.

As the Political Notes column reported May 10, more Bay Area cities than ever are expected to raise the Pride flag this June. And a number are eschewing the traditional version for the Progress flag.

At the request of San Mateo County LGBTQ leaders, cities on the Peninsula are being asked to fly that version throughout Pride Month this year. The county government will raise the Progress flag for the first time Tuesday, June 1, in front of its offices in Redwood City and fly it throughout the month. Belmont and South San Francisco city officials also plan to fly that version of the Pride flag next month.

To learn more about the International Day Against Homophobia, Transphobia and Biphobia, click here.

Cork's LGBTQI+ Awareness Week events can be followed on Facebook via @CorkCityLGBTInter-AgencyGroup and on Twitter via @CorkLGBTWeek.