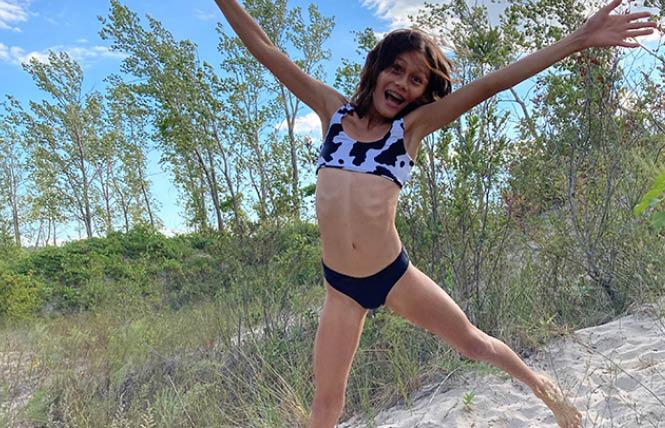 "Every Girl Deserves To Shine" is a campaign to support transgender girls around the globe and is the principle that guides RUBIES, a form-fitting clothing line for trans girls and gender nonbinary kids founded by a dad and daughter in Toronto, Canada.

When Ruby Alexander was 11 years old, she decided she wanted to wear a bikini, like her friends did. No more baggy board shorts! After an extensive search, her father, tech entrepreneur Jamie Alexander, realized there weren't any suitable bikini bottoms for his daughter, nor for other transgender and gender-nonconforming kids.

So he set out to make them, founding the RUBIES swimwear line in 2019. Since then, the company has sold over 1,000 black and pink shaping bikini bottoms in more than 20 countries worldwide.

Ruby and Jamie Alexander tell Out in the Bay producer Kendra Klang on this week's broadcast what makes their swimwear special, about their campaign to send free swimwear to trans girls worldwide whose families may not be able to afford them, and other ways they help trans girls "shine."

"I love how they just make me feel like the girl that I am," said Ruby. "I don't have to go to the beach in like, board shorts. I can just wear a bikini bottom that makes me feel confident and like my other friends and everyone else there."

Jamie Alexander said the bottoms are designed and constructed so there's no longer a need for "tucking" and other "painful things that people have been doing in the past to keep — you know, hide things."

Each package includes a note from now-13-year-old Ruby herself, encouraging recipients to be themselves, and her grandparents have helped pack the swimwear with colored tissue paper and sometimes "little stars thrown in for the smaller sizes," said Jamie Alexander. "We spend a lot of time on the experience for people when they open the packages — we want them to feel good."

"There are over 400,000 trans girls in North America and so many more around the world," says the "Every Girl Deserves To Shine" campaign page on the

Adults have written to RUBIES asking if there's a line for them. Jamie says at the moment, none are specifically for adults, but that the largest kids size can accommodate "basically up to a 40-inch waist.

Murder mystery novel
In the second half of this week's show, author David Perry reads from and talks about his murder-mystery novel "Upon This Rock," a tangled tale of homophobia and sex scandals at the highest levels of the Roman Catholic Church. As of this writing, the book is a finalist for the Ben Franklin Award: Best Gay Novel of 2020. (The award announcement was expected late Thursday, May 13.)

Hear more from clothiers Ruby and Jamie Alexander and author David Perry on this week's Out in the Bay — Queer Radio from San Francisco. The program airs 9:30 a.m. Saturday, May 15, on KSFP, 102.5 FM in SF only, and is available anytime, anywhere on Out in the Bay's website. Out in the Bay also airs at 10 p.m. Tuesdays on KALW, 91.7 FM throughout the Bay Area.

Eric Jansen and Kendra Klang host and produce Out in the Bay — Queer Radio from San Francisco. Learn more and listen at https://www.outinthebay.org/

Out in the Bay: A year into COVID, how are LGBTQs coping?
Sign up!