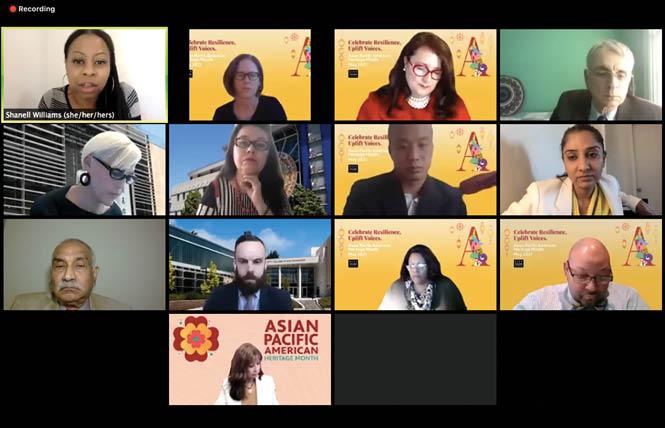 The City College of San Francisco Board of Trustees voted unanimously May 10 to approve an agreement to impose salary cuts in order to avert massive layoffs and the resulting class cuts at the educational institution.

The salary reductions were approved prior to the meeting by members of the American Federation of Teachers Local 2121, which had reached a tentative agreement with the college administration May 8. According to a news release from the union hours before the board meeting, 82% of the members voted in favor of the pay cuts to avoid layoffs.

As the Bay Area Reporter reported last week, it was anticipated that the college's board would vote at its May 10 meeting on the budget matter. The board had already approved the sending of layoff notices to 163 faculty members and 34 administrators across 39 departments as a way of dealing with a projected deficit of $33 million.

Those AFT members who voted, about 79%, accepted salary reductions, ranging from 4-11%, to prevent "devastating cuts and protect access for students," the release stated.

"The CCSF Board of Trustees meets this afternoon at 4 p.m. to make their final decision on proposed layoffs and cuts," the news release, which was sent minutes before the trustees met, stated. "AFT 2121 urges them to demonstrate the same commitment to CCSF that its educators have just shown. CCSF has been long underfunded by the state: the needs of San Francisco have always far surpassed support from Sacramento. The solution to this problem cannot be the elimination of the public community college that San Franciscans depend on to access quality higher education."

"While the national conversation increasingly moves towards recognizing the essential role of community colleges in addressing racial, class, and gender inequities, cities such as San Francisco need to ensure that they adequately fund, in the words of Dr. Jill Biden, their own 'most powerful engines of prosperity,'" it stated.

Tom Temprano, a gay man who is vice president of the City College board, stated after the meeting that the school needs local, state, and federal help.

"Tonight I joined with my colleagues to vote for an agreement with our faculty that closed the budget gap for the time being," stated Temprano, a legislative aide to gay District 8 Supervisor Rafael Mandelman. "Fortunately, that means no layoffs and no class cuts this year. Like community colleges across the country during the pandemic, City College has lost thousands of students and tens of millions of dollars — and it's going to get worse if we don't address our structural budget issues. We need help from the federal, state, and local government to grow again and I'm committed to working to make that happen."

Temprano was in the heat of the controversy late last week after unsupported and unfounded accusations he called the police on protesters who showed up to his Castro neighborhood home May 6, as the B.A.R. reported.

Shanell Williams, a bisexual woman who is the president of the board, stopped a public comment midway through from English professor Tehmina Khan when they repeated those accusations during Monday's meeting. Williams did not return a B.A.R. request for comment by press time.

The one-year agreement will result in an expense reduction of $22.6 million and provide for a 5% cash reserve, according to the trustees. Of that, $13.3 million will come from the faculty proportionate share salary reduction, $8.6 million from salary savings, and $4.8 million in retirement savings.

Final layoff notices will not be issued to any full-time faculty.

Trustee Alan Wong, who's also a legislative aide to District 4 Supervisor Gordon Mar, stated that he is "committed to honoring City College's agreement to work on joint legislative efforts with faculty and other stakeholders to gain long-term and sustainable funding for the college."

Some members of the Board of Supervisors are advocating the city provide emergency funding to the institution, which has struggled with budgetary problems for years.

'Absolutely appalling'
During public comment, dozens of people expressed their frustration with the whole process, characterizing the relationship between the trustees and faculty as "abusive" and "bullying." Faculty also expressed concern the agreement only kicks the can down the road to next year.

Leslie Simon, who has taught for decades at the college, told the trustees that if not for the agreement "you would have voted to end your political careers."

Though Williams insisted "we are not cutting Cantonese," several people expressed their fears the trustees were planning to do just that.

Laura Cohen, who spoke during public comment, responded to Williams saying that by "making the only Cantonese teacher to teach Mandarin," the trustees are "effectively cutting them [classes]."

"It seems you actually don't care about this school," Cohen said. "If you would like to prove that you do care, take a pay cut yourself. Austerity doesn't work — it's a tool of white supremacy."

Sandra Lee McKay, Ph.D., a professor emeritus at San Francisco State University, said that she is "shocked and appalled by the administration and trustees" for "putting the faculty in the position of having to give up salary to keep jobs and classes."

"This is absolutely appalling that they would have to lose from 4-11% in order to save courses and prevent layoffs," McKay said.

Williams said during the meeting that state and federal leaders who the trustees had spoken with were not very willing to spend cash to alleviate CCSF's particular budget shortfall until they see "structural changes."

"There is little appetite for bailing out City College at the state level," Trustee Brigitte Davila said. "The state should be paying more to the community colleges and the [California State University system]. I think that's something we all agree on."

Davila tried to address some of the concerns of those who expressed their dismay during public comment.

"The trustees have worked their asses off to do as much as they possibly humanly can, and I know everyone has in their heart the best interest of City College," she said.

Guest Opinion: City College is excited to welcome our students back for fall semester
Sign up!