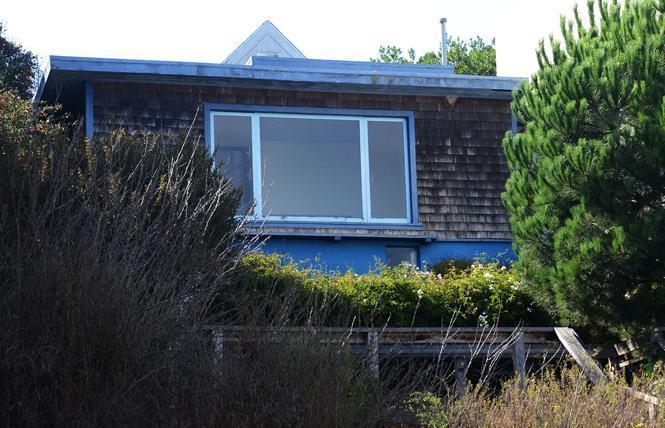 The San Francisco Board of Supervisors voted May 4 to landmark the Noe Valley home once owned by Phyllis Lyon and Del Martin Photo: Rick Gerharter

The San Francisco home of the co-founders of the country's first lesbian rights organization is now a city landmark. The two-story cottage that Phyllis Lyon and Del Martin shared for more than five decades is the first local LGBTQ historical property protected solely for its ties to lesbian history.

"It is where this beautiful couple kissed each other good night and drank coffee together in the morning for more than 50 years," said Shayne Watson, a lesbian and architectural historian who co-founded the Friends of the Lyon-Martin House group to advocate for the preservation of the women's home.

Gay District 8 Supervisor Rafael Mandelman instigated the landmark process for the Lyon-Martin House at 651 Duncan Street after the Noe Valley property, which also includes a vacant garden plot, sold last summer for $2.25 million. At the request of preservationists, Mandelman initially sought for the landmark to include the entire hillside site.

But the new owners, Paul McKeown and his wife, Meredith Jones-McKeown, lobbied for the landmark designation to solely cover the Lyon-Martin House due to concerns the fuller historical recognition for the property would curtail their ability to construct their family home on the vacant parcel, which has a street address of 649 Duncan Street. Earlier this year the city's Historic Preservation Commission sided with the family and recommended landmark status solely for the residential structure.

Mandelman chose to move forward with the landmark for just 651 Duncan Street, and the Board of Supervisors approved the designation at its May 4 meeting. It requires a second vote by the supervisors May 11 before being sent to Mayor London Breed for final sign off.

"Phyllis Lyon and Del Martin were queer activists before queer activism was a thing. The modern LGBTQ rights movement is built on the foundations laid by these women and their contemporaries, and it is fitting that their home is the first San Francisco historic landmark dedicated to lesbian history," Mandelman told the Bay Area Reporter. "They shared this home for more than half a century and it has clear historic value that should be preserved and celebrated. Early LGBTQ leaders like Phyllis and Del changed the world for the generations of queer people that would follow."

It is expected to become an official city landmark by June 20, ahead of the city's traditional Pride weekend. Discussions between the property owners and historic preservationists are ongoing on how to document the home, its place in LGBTQ history, and how it will be used going forward.

"We hope this will be an opportunity for many more people to learn about them and the work they did," said Jones-McKeown during a hearing last week before a supervisor committee.

Due to it being located in a residential neighborhood, it is unlikely to be opened to the public as a museum. One idea preservationists are exploring is for it to be home to an artist or activist in residence program.

Journalists who first met in Seattle in 1952, Lyon and Martin helped launch the influential Daughters of Bilitis, the first political and social organization for lesbians in the United States. They purchased the San Francisco property in 1955. Their home was a gathering place within the city's lesbian community and the site of various meetings and events.

The Lyon-Martin House is the second property related to LGBTQ history to receive city landmark status this year. In April the supervisors landmarked the Japanese YWCA/Issei Women's Building at 1830 Sutter Street, where the pioneering gay rights group the Mattachine Society hosted its first convention in May 1954.

This summer it is expected that the gay-owned Eagle bar South of Market will also become a city landmark. To date, San Francisco has landmarked two gay bar locations — the Twin Peaks in the Castro and the now-defunct Paper Doll in North Beach.

The other LGBTQ landmarks are the former home to the AIDS Memorial Quilt on upper Market Street and the late gay supervisor Harvey Milk's residence and former Castro Camera shop at 573 Castro Street.