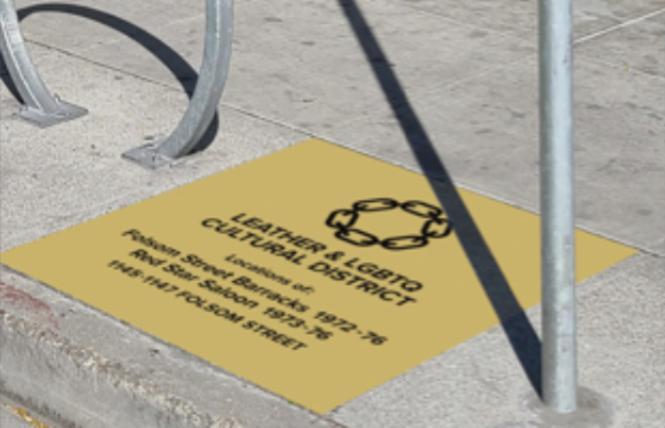 A project to install sidewalk markers recognizing current and former LGBTQ businesses in San Francisco's South of Market neighborhood has won the approval of the city's arts commission. Meanwhile, more of the leather-themed Eagle Plaza public parklet on 12th Street has been revealed.

As the Bay Area Reporter first reported in September, the Leather & LGBTQ Cultural District aims to place bronze plaques in the sidewalk near where various LGBTQ bars, shops, and bathhouses operated or currently are located in SOMA. At one time there were more than 120 such establishments, but today the number is down to 12.

The arts commissioners approved the design of the historical markers without comment on 13-0 vote, with one member absent, at their May 3 meeting. The unanimous backing had been expected, as the commissioners who serve on the civic design review committee had unanimously supported the sidewalk plaques when they met last month.

Such storied establishments as the Folsom Street Barracks, The Arena, Ramrod, The Brig, and the Club Baths of San Francisco would be memorialized with the historical markers. Ones would also be installed at the Eagle bar at 12th and Harrison streets and The End Up nightclub at the corner of Sixth and Harrison streets.

Leather district leaders have been working with local LGBTQ historians Shayne Watson and Gayle Rubin, who specializes in leather history, to finalize the list of locations. Roughly 80 locations have already won approval from city leaders to receive plaques, with the others identified by Watson and Rubin to be added to the official list in the future.

The leather district has been in close talks with the city's Public Works Department and the office of District 6 Supervisor Matt Haney, who represents SOMA, about incorporating 14 of the sidewalk plaques along Folsom Street as part of a pedestrian safety improvement project that city agency has underway. The Board of Supervisors endorsed the plaques in early April.

Berkeley-based Artworks Foundry, which created the Rainbow Honor Walk plaques found in the city's Castro LGBTQ district, would be hired to fabricate the leather district plaques, whose design was created by Jon Stoa. The bulk of the plaques will be installed between Fifth and 12th streets in SOMA, according to Cal Callahan, the leather district's manager.

In the meantime, the eastern side of Eagle Plaza, the public parklet on 12th Street between Harrison and Bernice streets, has come out from behind construction walls. The $1.85 million project, begun in 2019, is turning a portion of the roadway into a community gathering space honoring SOMA's leather and LGBTQ communities.

It is named after the gay-owned Eagle bar that abuts the western side of the plaza. Sidewalks at both entrances into the plaza have been painted the blue, white and black colors of the leather flag, a gigantic version of which now flies from a flagpole installed at the Harrison Street end of the plaza.

Over the weekend the leather district posted photos about the recently opened parklet section via its Facebook group page.