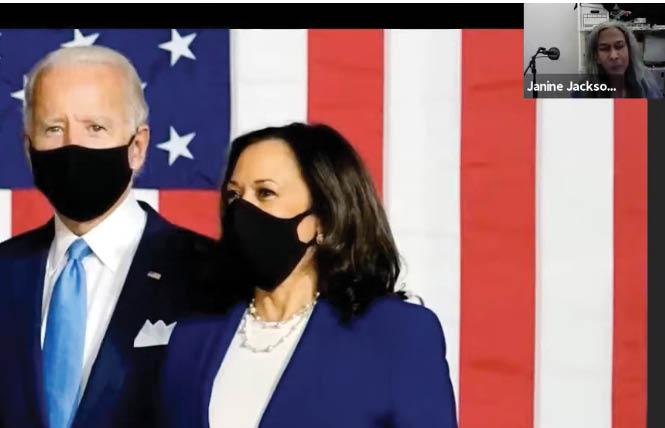 President Joe Biden, shown with Vice President Kamala Harris, was the subject of a review of his first 100 days in office that featured Janine Jackson, top right. Photo: Screengrab

While President Joe Biden's campaign seemed to some like a throwback to a bygone era, his first 100 days in office have shown that he aspires to be a transformational leader — and can be, if he is pushed enough.

That was the consensus coming out of "The First 100 Days: LGBTQ Rights, Racial Equity, and Reproductive Justice," a webinar hosted by the Williams Institute and the Criminal Justice Program at UCLA School of Law, and the African American Policy Forum in New York City.

The webinar was held April 29, Biden's hundredth day as president, and one day after his first address before a joint session of Congress.

Brad Sears, the interim executive director and founder of the Williams Institute, which studies LGBTQ demographics, began the late afternoon session by setting the agenda for the discussion.

"I think this panel reflects the institute's commitment to doing research on anything impacting LGBTQ people in our full diversity, including racial equity, reproductive justice, and immigrant issues," Sears said.

With that, Sears handed off the virtual mic to Janine Jackson, the program director of Fairness and Accuracy in Reporting. Jackson discussed the historic importance of the milestone.

"Franklin Roosevelt stormed out of the gates in the midst of the Great Depression and started the New Deal," Jackson said. "This marker of 100 days has come to represent not just the ability of a new president to make their mark, but to set the tone for the new term."

Jackson stressed that while many people may be thankful that anybody but Donald Trump is the president now, that would be a very low bar by which to judge Biden.

"We're going to be discussing the early returns of an administration that came into office after a particularly fraught election. Indeed, if you compare it to the last 100 days of the Trump administration — a time the country came perilously close to implosion — it's probably understandable to congratulate the new administration for bringing us to safer harbors," Jackson said. "Last night, he said white supremacy is terrorism and said to trans Americans that the president has your back. That's not what we're used to hearing, but it doesn't mean don't stay mindful of whether the Biden administration achieves."

Filibuster an obstacle to legislation
Rashad Robinson, president of the civil rights nonprofit Color of Change, said that the filibuster is a chief obstacle to moving the needle on racial equity. He was joined in this sentiment by Congressman Mark Takano, a gay Democrat who represents California's 41st Congressional District in Riverside County.

"What's coming up now after the first 100 days are the real important things," Robinson said. "Will Biden engage and lean in about the filibuster? Because in 2022, I can't go to the Black community and say we couldn't pass this legislation because of something called the filibuster ... but vote like you did before."

A majority vote in the U.S. Senate could end the filibuster's 60-vote threshold on legislation, but Democratic senators Joe Manchin (West Virginia) and Kyrsten Sinema (Arizona), who is bisexual, are opposed to ending it.

Takano called the filibuster "the Edmund Pettus Bridge of this century," referring to the bridge in Selma, Alabama where, in 1965, civil rights demonstrators, including the late Georgia Congressman John Lewis, were initially violently prevented from crossing by police.

(The filibuster was often used by Southern Democrats to stop or slow down civil rights legislation.)

"We need to cross that bridge," Takano said. "No less than our democracy is at stake. ... What weighs on this president is knowing he can't govern as a restorationist president — he has to govern aspirationally. He knows his presidency is the beneficiary of organizers in the state of Georgia."

Takano said that with the filibuster out of the way, Senate Democrats could pass landmark voting rights, police reform, immigration, and reproductive rights legislation. The Equality Act, which would add sexual orientation and gender identity to the Civil Rights Act of 1964, is also in danger of not passing out of the Senate due to the filibuster. It passed the House in February.

Robinson agreed with Jackson that Biden has surprised people by governing with an eye toward making lasting changes.

"He's governing differently than what a lot of us imagined," Robinson said. "Knowing Biden ran as a restoration candidate — very different from [Barack] Obama, who ran as a change candidate, or Trump, who ran as a 'change the rules' candidate — there has been ways our collective movements have tilled the soil in ways, have helped achieve things in ways that we didn't know would be on the agenda. And yet, at the same time, we are wrestling with a limited idea of what's possible. I'm impressed about some things but I think there is more to go."

Abortion rights still threatened
Alexis McGill Johnson, the president and CEO of the Planned Parenthood Federation of America, said that she agreed with initial Biden moves on reproductive rights, but is frustrated Biden is not more vocal about the issue at a time when many states are attempting to limit them.

In February, for example, South Carolina Governor Henry McMaster (R) signed a law making abortion illegal after a fetal heartbeat is detected. A federal judge blocked the new law from going into effect, but anti-abortion forces hope it, or restrictions in other states, will provide the Supreme Court the opportunity to overturn precedents, such as Roe v. Wade, that guarantee the right to an abortion.

"What we heard last night [was] ... no mention of reproductive freedom," Johnson said, referring to the president's address. "The inability to name it with the bully pulpit, even though [Biden] is passing executive orders, harms our ability to name it strongly and organize our allies."

Biden, who held an anti-abortion voting record during his first two decades in the Senate, came around to his party's position by the 2000s. Personally opposed to the procedure, Biden agreed to oppose the Hyde Amendment (which bans federal funding of abortion) only when running for president last cycle.

The global gag rule, routinely implemented by Republican administrations and rescinded by Democratic ones, blocks U.S. funding for non-governmental organizations that provide abortion counseling or referrals, expanded abortion services, or that advocate for decriminalization of abortion.

Some 500 proposed restrictions on reproductive freedom have been introduced in statehouses in the last 100 days, Johnson said, and "17 cases are one step away from a newly-made Supreme Court that could overturn Roe."

Biden announces higher refugee admissions cap
Jennifer Chacón, a UCLA professor focusing on immigration law, offered her assessment of the administration's moves in its first 100 days. While applauding the end of some of the more draconian measures implemented during the Trump administration, Chacón said there is a lot of work to do.

"The Trump administration made over 1,000 changes to immigration law," Chacón said. "In addition to the travel bans, there were changes to internal immigration enforcement procedure, changes to asylum requirements, the Remain in Mexico policy, the deliberate and cruel policy of family separation and changes in the public charge rule. So the Biden administration has its work cut out for it, and has made some inroads, but you see how the baseline isn't very good."

While there has been "a substantive change in tone," Chacón said, there is "still a long way to go with 10 million undocumented people, two-thirds of whom have been here over 10 years," and "the Biden administration is on track to resettle fewer refugees this year than any year under his predecessor."

Biden elicited a strong backlash from immigration advocates last month when, after promising to increase the Trump-era refugee cap, he decided to maintain the 15,000 refugee limit. The White House quickly reversed course.

Biden had a May 15 deadline by which to raise the cap. On May 3, he announced that the annual refugee admissions cap will be raised to 62,500 annually.

Yet, "the sad truth is that we will not achieve 62,500 admissions this year," Biden stated in a news release. "We are working quickly to undo the damage of the last four years."

In the first fiscal year of his presidency, Biden seeks a goal of 125,000 refugee admissions.

"We are going to use every tool available to help these fully-vetted refugees fleeing horrific conditions in their home countries," Biden stated.

"Joe Biden is not governing like a restorationist president," Takano said. "Even when he has moments like the refugee caps, I was one of many signatures on a letter led by [Democratic Minnesota Congresswoman] Ilhan Omar that called on President Biden to revise those caps, and he reversed course. What saves this president, in my eyes, is his willingness to listen."