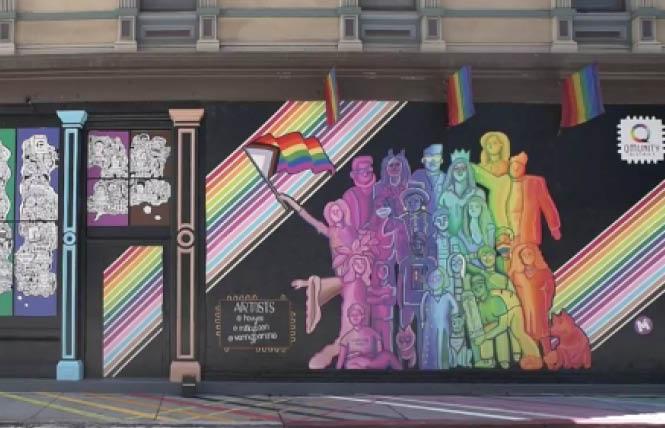 The Qmunity District in San Jose unveiled its first mural April 30; a portion of which is shown here. Photo: Screengrab

As the Bay Area Reporter previously reported, Natalia Smüt Lopez, 24, of San Jose was killed April 23. Elijah Cruz Segura, 22, who she'd been romantically involved with according to prosecutors, was formally charged with her murder April 29 but has not yet entered a plea. Lopez was featured in the mural, and her family was present at the midday news conference for the unveiling of the 864 square foot public art located on the side of the Splash Video Dance Bar, at the corner of Lightston Alley and Post Street.

Post Street is the anchor of the Qmunity District, which, as the B.A.R. previously reported, was formally designated in September 2020. It was at that time that plans for the mural were first announced. 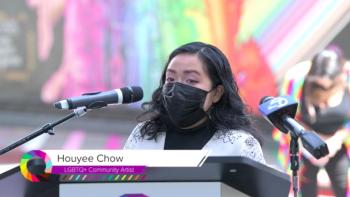 The two artists behind the mural — Nick Ybarra and Houyee Chow — are both pansexual young people.

"I want to say how thankful I am to be able to create art in this beautiful space," Ybarra said. "I was in the fifth grade when same-sex marriage was legalized, so I grew up blind to the history of the gay community, and in our own backyard in San Jose."

Chow said that while the mural is ostensibly about South Bay queer history, she wanted to blur the lines between past and present.

"I thought 'let's literally embody and show people alive today,' so we did an open call to the queer people of Silicon Valley and depicted them in this mural," Chow said.

Vanessa Singh, Lopez's sister, briefly spoke to thank the South Bay LGBTQ community for its support over the past week.

"Everyone has made this time so much easier," Singh said. "This needs to stop. We are all one; we are all human, and there's no reason people should fear for their lives."

Lopez is the 16th victim of anti-transgender violence this year in the United States, according to the Project MORE Foundation, a nonprofit service provider to South Bay LGBTQs.

"I know my sister will be a memory forever, and so thank you for taking the time to do this," Singh added.

Ybarra said he was "very happy we were able to include [Lopez] and memorialize her beautiful legacy" in the mural.

Ken Yeager, the executive director of the BAYMEC Community Foundation and the first openly gay elected official to serve in Santa Clara County, expressed his condolences as well.

"I, too, want to express my sympathies to Natalia's family and work in solidarity with you all so that these types of horrific crimes no longer continue," said Yeager, who previously served on the San Jose City Council and the Santa Clara County Board of Supervisors.

Yeager said that he hopes the mural will raise awareness about the history of the LGBTQ community in the South Bay, which he says young people sometimes assume never even had much of a past.

"It's not that it's been forgotten, it's that people aren't aware of it," Yeager said. "You talk to younger queer people today and they don't know anything that happened down here."

Yeager works to preserve South Bay LGBTQ history. He is also working on putting some of that content into an exhibit at History San Jose and in "a documentary we're hoping can be shown in schools."

"There are so many stories that need to be told; we just haven't been telling them," Yeager said.

"Today we can celebrate how far the Pride-ification of Post Street has come," Peralez said. "This beautiful, vibrant mural contributes to the safe haven and inclusion of this community. It is my hope people continue to learn more about the history of the LGBTQ+ movement."

After a moment of silence to honor Lopez, Sera Fernando, a queer trans woman who is senior management analyst at the Santa Clara County Office of LGBTQ Affairs, gave a riveting address connecting the mural to present struggles.

"Just look at what's behind me and the beauty of this mural — this symbolic representation of how diverse, how beautiful our LGBTQ community is in San Jose, in the South Bay," Fernando said. "I'm so proud we had queer artists create this.

"There's a lot of things we need to do better to create more compassion and understanding for the LGBTQ community, for racial equity and for transgender women," she continued. "I want to thank Natalia's family for being here today."

Vanny Pareno, creative supervisor with the Qmunity District, announced that the mural unveiling was just the beginning of a weekend of "art and community activism" in the district, including an art walk and a mural paint party. Community members of all backgrounds are invited to paint a portion of a second mural welcoming the public to the district.