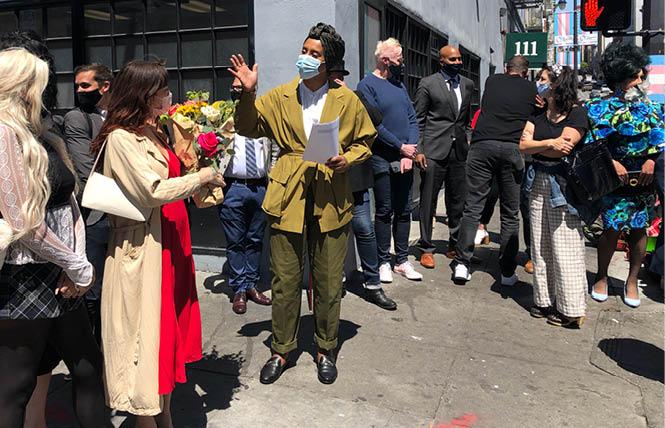 Honey Mahogany, center, spoke to supporters April 29 as she announced she is seeking to become chair of the San Francisco Democratic Party. Photo: Matthew S. Bajko

Surrounded by LGBTQ community leaders and several supervisors, Honey Mahogany Thursday kicked off her bid to become the first transgender and first Black chair of the San Francisco Democratic Party at the Tenderloin site of the Compton's Cafeteria riot. The August 1966 event is the first documented trans uprising in American history.

As the Bay Area Reporter first reported online April 27, Mahogany also is set to become the first drag queen to lead the local party. Mahogany, who also identifies as queer and nonbinary, last year became the first non-male identified transgender person elected to the Democratic County Central Committee, which runs the city's Democratic Party. Its members decide who becomes chair and are expected to elect Mahogany to the leadership role at the DCCC's May 26 meeting.

"I hope to make the San Francisco Democratic Party stronger, more open, more diverse, and, as I learned from the Sisters, sprinkle a little glitter on it," said Mahogany, referring to the drag nun philanthropic group the Sisters of Perpetual Indulgence.

As such, Risher is the highest-ranking transgender person to be an elected officer of a state, district, or territorial Democratic Party, according to the Victory Fund. Mahogany will become the first trans person in the U.S. to chair a local Democratic Party.

"As a young kid growing up in San Francisco, seeing a trans person lead the Democratic party would have been so meaningful'' said Mahogany, 37, who grew up in the Sunset district and is now the chief legislative aide to District 6 Supervisor Matt Haney. "San Francisco is a beacon of progress for so many other cities in America. With me as chair of the San Francisco Democratic Party, we have an opportunity to show the rest of the country that San Francisco lives its values; that we embrace our trans brothers and sisters; and that we support Black trans leadership."

Due to his being elected as an incoming vice chair of the California Democratic Party, gay San Francisco Democratic Party Chair David Campos plans to step down from the local leadership position after he is sworn in to the statewide post May 1 during the state party's virtual convention this weekend. Campos, formerly the city's District 9 supervisor and now chief of staff for embattled District Attorney Chesa Boudin, has led the local party since the summer of 2017.

He will remain an elected DCCC member. Having first appointed Mahogany to a vacant seat on the DCCC three years ago, Campos is supporting her to be his successor as party chair.

Campos was among the local leaders who joined Mahogany at her April 29 news conference to officially declare her candidacy for chair. Haney, who represents the Tenderloin, also came to support his staffer, as did District 9 Supervisor Hillary Ronen. They both are also elected DCCC members.

"This is truly a dream come true for San Francisco," said Ronen, adding that Mahogany becoming party chair "puts us back on the map and in the news for a positive reason."

DJ and drag star Juanita MORE!, recently elected empress of the Imperial Council of San Francisco, told the B.A.R. having Mahogany in such a high-profile political position will be important for the trans community, for the Black community, and for the drag community. Having been raised in Fremont across the bay, MORE! said it will also be exciting to see a fellow Bay Area native leading the city's Democratic Party.

"It is not just important for San Francisco but it is also important for California," said MORE!, a local nightlife event producer who first met Mahogany 15 years ago as she was emerging onto the local drag scene.

Mahogany is a co-founder of the Transgender District, which in 2017 became the world's first officially recognized transgender neighborhood located in San Francisco's Tenderloin. Jupiter Peraza and Juniper Yun, trans women who both work as program associates for the transgender district, came to support Mahogany at her kickoff event.

Mahogany's election as chair will signal to other people of color, indigenous people and transgender individuals that they can also be "welcomed into a space to affect change for our community by our community," noted Yun, an immigrant from Korea.

Peraza, who is Latina, added, "It is about time we nurture a society led by us."

Alice co-chair Gary McCoy attended Mahogany's campaign launch and told the B.A.R. he is personally "elated" she is seeking to lead the local party.

"Outside of being many firsts as chair, Honey brings a lot of skills and relationships," noted McCoy, a gay man who recently departed his job working for House Speaker Nancy Pelosi (D-San Francisco) to oversee public affairs at the nonprofit HealthRIGHT 360.