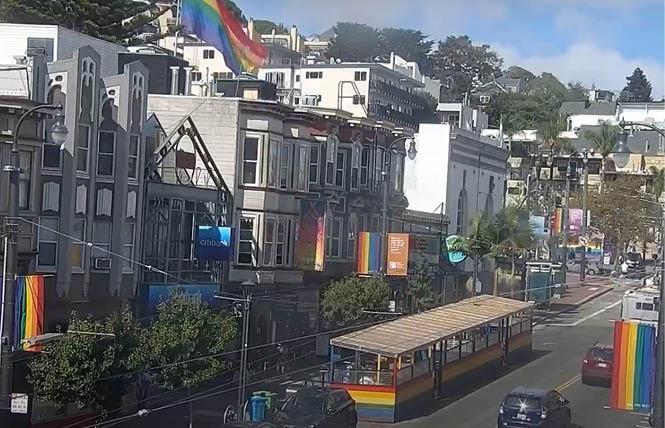 Ahead of a town hall set for Tuesday night about a proposal to place 125 security cameras in San Francisco's Castro district, a second main LGBTQ political club in the city came out in opposition to the plan.

In a statement it posted to its Facebook page April 27, the Alice B. Toklas LGBTQ Democratic Club announced it "strongly object(s)" to the placement of the cameras in the city's LGBTQ neighborhood and urged people to express their opposition to what it deemed a "dangerous plan" during the community forum being held Tuesday at 6 p.m. by the Castro/Upper Market Community Benefit District.

Last fall, the Harvey Milk LGBTQ Democratic Club successfully pressured the Castro CBD to delay the installation of the cameras in order to gather more community feedback. The Castro LGBTQ Cultural District had also expressed its own "grave concern" about the plan at the time.

As the Bay Area Reporter has previously reported, the Castro CBD had been set to vote on accepting some $695,000 from tech mogul Chris Larsen to pay for the network of 125 security cameras. Larsen has funded CBDs to install cameras around San Francisco, as the New York Times reported in July 2020, in such neighborhoods as Fisherman's Wharf, Lower Polk, Mid-Market, Tenderloin, Union Square, and Japantown.

The issue has split the city's LGBTQ community, with some advocates voicing alarm at people visiting the Castro being surveilled in such a way, especially if they are not out of the closet. Others fear they will be used by law enforcement against queer people of color and transgender individuals, two groups historically targeted by the police for petty crimes.

Due to the controversy over the issue, the CBD agreed to launch an online survey to gather feedback and to host the community forum. Tuesday afternoon the Alice club's board went public with its opposition to the cameras.

"Queer people and people of color have historically been the victims of targeted violence from law enforcement, and we believe that further eroding our community's privacy will only put our lives in greater danger," stated the Alice club. "We are pleased that the CBD has agreed to a robust community feedback process, and we encourage everyone who values their privacy and the unique freedom of expression that makes the Castro special to speak out against this dangerous plan."

And in emails shared with the B.A.R. ahead of the town hall, Milk club leaders assailed the Castro CBD leadership for not alerting them directly about it or inviting them to participate. In their email to Castro CBD Executive Director Andrea Aiello, the Milk club alleges the benefit district deemed the political group as not "from the Castro," while noting the Aiello herself does not reside in the neighborhood. (She lives in Pacifica.)

"We view your efforts to install a complex surveillance network part and parcel of an ongoing effort to gentrify and displace queer people and queer identity from a neighborhood that many of us call home, and which is without a doubt our political and cultural epicenter," wrote the club leaders.

Yet Aiello noted in an emailed response to the Milk club, also shared with the B.A.R., that "several days ago, my board president and I spoke about having a collaboratively structured meeting with several of you." She pledged to provide the Milk club leaders "with a more thoughtful response and discussion."

The Milk club is now demanding that the Castro CBD take no action on the installation of the security cameras until the two community groups can discuss the matter "in an agreed-upon setting mediated by a neutral third party." It also informed the CBD that it would not take part in the town hall and criticized the wording of the survey about the cameras.

"Over and over again, you have convened space on your terms, and promulgated sham surveys and skewed messaging that deliberately exclude any mention of the risks that we are raising," wrote the club. "Those risks have been the subject of extensive analysis and actual harm to our community very recently and over the past several decades."

In an email the Castro CBD sent out Monday about the town hall, it noted 50 people had already registered to attend the Zoom call and "listen to the community dialogue." It noted participants would be able to anonymously express their opinions by answering three questions at the end of the town hall.

To pre-register to participate in the call, click here.

Torrid town hall on cameras to yield only more discussion
Sign up!