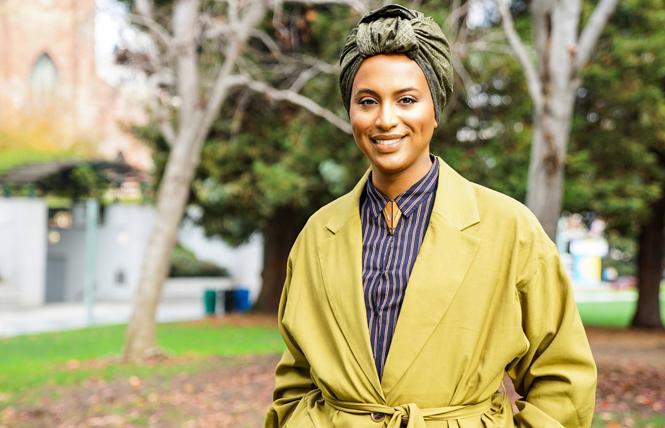 Mahogany, who also identifies as queer and nonbinary, is set to officially announce her candidacy for the party post at noon Thursday, April 29, at the corner of Turk and Taylor streets. It is the site of the Compton's Cafeteria riot in August 1966, the first documented trans uprising in American history.

"I do feel like I am ready to take over as chair," Mahogany, the chief legislative aide for District 6 Supervisor Matt Haney, told the Bay Area Reporter. "I think the timing is right with all the anti-trans legislation we are seeing passing across state legislatures across this country and the resurgence of the Black Lives Matter movement and the Chauvin case just receiving a verdict."

Due to his being elected as the incoming vice chair of the California Democratic Party, gay San Francisco Democratic Party Chair David Campos plans to step down from the local leadership position after he is sworn in to the statewide post May 1 during the state party's virtual convention this weekend. Campos, formerly the city's District 9 supervisor and now chief of staff for embattled District Attorney Chesa Boudin, has led the local party since the summer of 2017.

He will remain an elected member of the Democratic County Central Committee, which runs the San Francisco Democratic Party. Having first appointed Mahogany to a vacant seat on the DCCC, Campos is supporting her to be his successor as chair when the DCCC members vote at their May 26 meeting.

"Given what is happening with the trans community, it will send a powerful statement," said Campos.

According to several DCCC members the B.A.R. spoke with, it appears Mahogany has the votes needed to become chair. So far no other DCCC member has indicated they plan to run for the chair position against her.

In San Francisco, Mahogany will join bisexual college board president Shanell Williams as the top-ranking LGBTQ Black leader on an elected body. Mahogany is a San Francisco native, like Williams, and grew up in the Sunset district.

"I think it will be such a powerful thing to have a Black trans person as head of the San Francisco Democratic Party," said Mahogany, especially when the city's top two officials, Mayor London Breed and Board of Supervisors President Shamann Walton, who represents District 10, are also Black. "I just think it would be an amazing opportunity for San Francisco to again invest in Black leadership and Black trans leadership at this time. It would speak to San Francisco's tradition of being a progressive beacon and ideal for the liberal movement and the Democratic Party in general."

With the city dealing with myriad issues wrought by the COVID pandemic, and local elections set to take place next year, Mahogany told the B.A.R. she would like to assist in the efforts to revive the city's economy and address the various issues it is facing, such as homelessness and a lack of affordable housing, as party chair.

"For me, politics is a means to an end," said Mahogany. "I think that our city is really in a state of crisis right now, and we are going to need both to be able to bring people together as best we can and really create policies that will help us build a new future post-pandemic. I think the Democratic Party has an important role in that.

"We do endorse ballot measures and policies that will be an important part of our restructuring, and we endorse candidates we trust in and believe will lead us in the right direction," Mahogany added. "I want to be a part of that."

As for Campos, he is the focus of speculation that he will run to be city attorney in 2022 with the expected departure of City Attorney Dennis Herrera later this summer to take over as general manager of the San Francisco Public Utilities Commission. Breed on Monday named Herrera to take over the troubled agency, whose previous general manager, Harlan Kelly, was arrested last November by federal authorities on corruption charges.

Once Herrera is officially given the GM job, Breed will be able to name his successor as city attorney. But she is unlikely to do so until later this summer so the person does not have to run to fill out Herrera's term through the end of 2022 on the same ballot as the recall of Governor Gavin Newsom this fall. The Republican-backed push to remove Newsom from office was officially declared as having met its needed threshold of signatures to qualify by Secretary of State Shirley Weber on Monday.

Instead, the person will likely have to run on the June primary ballot in 2022 and then seek a full four-year term on the November ballot that year. Campos told the B.A.R. Tuesday that he has not made a decision on whether to run for city attorney.

If no candidate receives 50% plus one of the vote then the top two vote-getters will compete in a special election August 31. Whoever is elected to the seat will need to run for a full two-year term in 2022.

Three out candidates are seeking to succeed Bonta in the Legislature. Gay San Leandro Unified School District Board of Education member James Aguilar, who turns 22 in November, would be the youngest person serving in the Legislature if elected, eclipsing bisexual state Assemblyman Alex Lee (D-San Jose) by several years. Elected in November at the age of 25, Lee became the youngest state lawmaker since 1938.

Social justice attorney Janani Ramachandran, an Oakland resident who is queer and lesbian, would be California's first South Asian assemblywoman, as she is of South Indian descent. She would also be the first legislator who identifies as queer and first out API female state legislator.

The trio is considered the underdogs in the race, however, as they are running against Bonta's wife, Mia Bonta, currently the Alameda Unified School Board president, and Alameda Vice Mayor Malia Vella, who is the first Filipina elected to her City Council.

Web Extra: For more queer political news, be sure to check http://www.ebar.com Monday mornings for Political Notes, the notebook's online companion. This week's column reported on the status of various LGBTQ bills in the California Legislature.
Keep abreast of the latest LGBTQ political news by following the Political Notebook on Twitter @ http://twitter.com/politicalnotes

Out in the Bay: Honey Mahogany on politics, 'Drag Race,' & The Stud
Sign up!