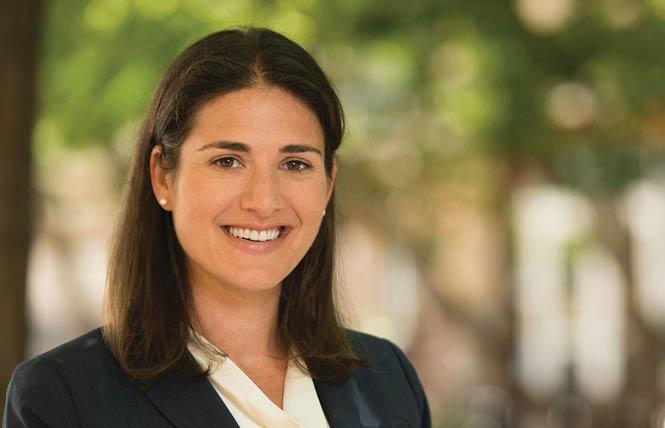 California senators will take up a bill allowing for the option of nonbinary as the gender identity on death certificates now that their Assembly colleagues have approved the legislation. It is the first bill focused on LGBTQ rights to pass out of its house of origin this legislative session.

The Legislature's lower chamber passed Assembly Bill 439 April 19 on a 65-2 vote, with 12 Assembly members not voting. It is similar to the 2017 legislation Senate Bill 179, authored by lesbian Senate President pro Tempore Toni Atkins (D-San Diego), which authorized people to use nonbinary on their birth certificates, court documents, and driver's licenses.

Assemblywoman Rebecca Bauer-Kahan (D-Orinda), who authored AB 439, hailed its passage in a Facebook post after it cleared the Assembly floor vote.

"This important legislation will add a non-binary option to death certificates, much like how it already exists for driver's licenses and other critical documents," wrote Bauer-Kahan. "Proud to work with Equality California on this important legislation to ensure equity in essential legal documents so that individuals are recognized by law for who they really are, even in death."

It is one of a number of LGBTQ rights bills EQCA, the statewide LGBTQ rights advocacy organization, is co-sponsoring this year. EQCA legislative manager Tami Martin called AB 439 a "common sense update" to state code akin to Atkins' previous bill when it was heard in the Assembly Health Committee earlier this month.

"It builds upon the Legislature's previous work to ensure all Californians, including nonbinary Californians, have the freedom to live as their authentic selves," Martin said.

A number of the LGBTQ rights bills are nearing final votes in their chamber of origin as lawmakers race to meet a deadline of having their legislation pass out of the Senate and Assembly fiscal committees by May 21 and survive floor votes by June 4. The other chamber will then take up by the bills, which need to be sent to the governor's desk for signage by September 10.

California lawmakers' support for the bills so far, often by bipartisan votes, is a legislative rebuke to the cascade of anti-LGBTQ laws being passed in Republican-controlled legislatures across the country. Federal LGBTQ rights organization the Human Rights Campaign recently warned that 2021 is poised to be the worst year for attacks on LGBTQ rights.

It noted April 22 that 15 anti-LGBTQ state bills were adopted in 2015 while eight had already been enacted into law this year and another 10 were already on governors' desks awaiting signature. Five of those are among the more than 115 anti-trans bills being considered in at least 30 states this year.

If all are signed into law then 2021 will see more anti-LGBTQ legislation be enacted than in the last three years combined, noted HRC.

Groundbreaking legislation
Meanwhile, the Golden State is once again leading on LGBTQ rights and is very likely to adopt groundbreaking LGBTQ legislation later this year.

SB 379, for instance, seeks to ensure that the University of California only contracts with facilities that allow the UC staff in those facilities to provide gender-affirming and reproductive health care. It survived its hearing before the Senate's health committee April 21. Authored by gay state Senator Scott Wiener (D-San Francisco) and known as the Equitable and Inclusive UC Healthcare Act, SB 379 passed on a 9-2 vote and now awaits a vote by the appropriations committee.

"As right-wing lawmakers in states across the country continue to attack reproductive freedom and transgender healthcare, we're proud to be part of the effort to hold UC Health accountable to its principles to fully serve all the communities that depend on this public institution for the care they need," stated NARAL Pro-Choice California along with the other co-sponsors of SB 379 EQCA and American Civil Liberties Union California Action.

Thursday, April 22, a bill aimed at protecting the privacy rights of people receiving sensitive health care services, such as gender-affirming care, passed out of the Assembly Privacy and Consumer Protection Committee on a 9-1 vote with one abstention. AB 1184 now awaits a vote by the Assembly Appropriations Committee.

It is one of two trans rights bills Assemblyman David Chiu (D-San Francisco) is carrying this session. AB 1184 would expressly prohibit health care providers from disclosing services a patient receives under an insurance policy held by another person, such as a parent or spouse. Thus, a youth receiving transgender health care under their parent's policy can request their health provider not inform them their child is receiving such care.

Chiu's other bill, AB 245, would prohibit public universities from deadnaming trans and nonbinary students on their diplomas and academic records. It is awaiting a final vote in the Assembly, having been passed out of appropriations April 14 on a 12-0 vote, with four committee members abstaining.

The Assembly Appropriations Committee April 28 will take up AB 218, which is aimed at allowing Californians to update their marriage certificates and the birth certificates of their children to accurately reflect their legal name and gender. Gay freshman Assemblyman Chris Ward (D-San Diego) revived the legislation after Governor Gavin Newsom vetoed similar legislation last fall due to concerns it would inadvertently out transgender and nonbinary individuals.

With his AB 218, Ward is trying to address how someone seeking updates to their records due to transitioning their gender can avoid the public notification requirement. People can currently keep their names confidential in order to avoid domestic violence, stalking, sexual assault, or human trafficking.

Another bill having to do with gender identity is SB 272 authored by gay state Senator John Laird (D- Santa Cruz). It will update "archaic gender-specific pronouns" used in the state's vehicle code to refer to the California Highway Patrol commissioner, now led by a woman, as well as throughout the state's insurance code.

Having passed out of the Senate Judiciary Committee April 20 on an 11-0 vote, the legislation is now awaiting a vote before the full Senate. Among its backers are gay Insurance Commissioner Ricardo Lara and Lieutenant Governor Eleni Kounalakis.

"As the first woman elected lieutenant governor of California, I know firsthand what it means to serve in a role that was not written for you. And yet, California Code is still riddled with male pronouns," noted Kounalakis. "Changing the CHP Commissioner code section promotes gender-inclusive legal language and ensures that references to the CHP Commissioner do not allude to a particular sex, social gender, gender identity, and do not perpetuate gender stereotypes. I believe this eye toward inclusion is vital in ensuring equality, and furthers the ideals that all services, opportunities, and establishments are open to all people."

Set to be taken up by the Senate Appropriations Committee May 3 is SB 357, the Safer Streets for All Act co-authored by Wiener and Assemblyman Ash Kalra (D-San Jose). It would repeal California Penal Code Section 653.22, the law that criminalizes loitering for the intent to engage in sex work. It would also allow those convicted of loitering with the intent to commit prostitution, particularly the Black women and transgender individuals often targeted under the law, to seal their records.

"This is the first step in repealing a Jim Crow law that criminalizes Black and trans people in public spaces," stated Fatima Shabazz of Fatima Speaks and co-leads the policy committee of the DecrimSexWorkCA Coalition.

Two other bills concern older LGBTQ adults, such as Laird's SB 258, which aims to include older people with HIV as part of the population of "greatest social need" when it comes to programs and services administered by the California Department of Aging. It is awaiting a final vote before the Senate Appropriations Committee.

The other bill is AB 465 by Assemblyman Adrin Nazarian (D-Van Nuys), which would require that professional fiduciaries receive LGBTQ+ cultural competency and sensitivity training during their education and licensing process. Private professional fiduciaries provide critical services to older adults and people with disabilities, from managing their clients' daily care, housing, and medical needs to ensuring their bills are paid and managing their investments. It is awaiting final passage out of the Assembly Appropriations Committee.