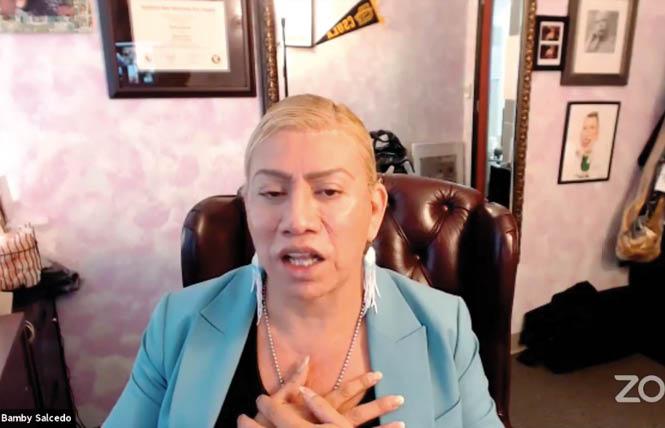 Bamby Salcedo, president and CEO of the TransLatin@ Coalition, spoke during the first news conference of the California Transgender, Gender Non-conforming, Intersex Policy Alliance, which was formed to seek state funding for the Transgender Wellness and Equity Fund established last year. Photo: Screengrab via Zoom

A new alliance of predominately transgender, gender-nonconforming and intersex-led organizations has at the top of its agenda securing taxpayer dollars for a wellness fund created last year by California legislators.

As the Bay Area Reporter previously reported, Governor Gavin Newsom signed Assembly Bill 2218 into law last September. The bill established the Transgender Wellness and Equity Fund but the money for it was stripped from the final version.

The bill — intended to assist organizations serving people that identify as transgender, gender-nonconforming, or intersex, and help create or fund TGI-specific housing programs and partnerships with hospitals, health care clinics and other medical providers to provide TGI-focused health care — did not look like it was going to pass at one point, due to its $15 million price tag at a time of budgetary concern prompted by to the COVID-19 pandemic.

But after the TransLatin@ Coalition fought for AB 2218 for months, rallying support and testifying at hearings, and after the funding was removed from the bill, it became law.

Now the TransLatin@ Coalition has joined with over 25 organizations to create the California Transgender, Gender Non-conforming, Intersex Policy Alliance.

The alliance held its first news conference April 21, announcing its intention to seek funding for the Transgender Wellness and Equity Fund. The alliance is seeking $15 million over two years, starting in 2022, Bamby Salcedo, a trans woman who is president and CEO of the TransLatin@ Coalition, told the B.A.R.

Assemblyman Miguel Santiago (D-Los Angeles), a straight ally who introduced AB 2218 in January 2020, said during the virtual news conference that now is the time for California to take a stand for trans equity.

"We had horrifying attacks from outside groups that said heinous things," Santiago said about the struggle to get AB 2218 passed. "But the Legislature made it very clear that we need to provide the wraparound support services and we needed to start a Trans Wellness and Equity Fund, and we are here today, having passed a policy piece, going to the budget request.

"It's timely we do it," Santiago added. "We saw the horrific actions taken by Arkansas and I can't believe here we are in the 21st century talking about what other states are doing. It's timely that California steps up and provides the necessary resources."

As the B.A.R. previously reported, a simple majority in the Legislature overrode Governor Asa Hutchinson's veto of House Bill 1570. Called the Arkansas Save Adolescents from Experimentation, or SAFE, Act, the law prohibits transgender youth from accessing medication to delay puberty even with the consent of parents and medical professionals. It is one of over 100 bills that have been introduced in 31 states this year targeting the trans community, according to the Human Rights Campaign and other groups.

"I just want to thank you for allowing me to be a part of the journey," Santiago said, concluding his remarks. "There are a lot of allies in the state Legislature and we have friends like you to make sure equality reaches all, not just a few people."

"None of this would have been possible without your support," Pulido said. "I thank you for trusting our lead about what this should look like."

Pulido said that the coalition came out of the nine organizations, all of which were transgender, gender-nonconforming and intersex-led, that worked to push AB 2218 when it was in the Legislature.

"There hasn't been anything like it," Pulido said. "It was really powerful engaging in the state Capitol because people in the Legislature didn't know there were so many TGI-led organizations in the state of California.

"After the bill passed, we went through a restructuring process to figure out how to engage with the many organizations doing work throughout the state of California," Pulido continued. "This led to the California TGI Policy Alliance."

The Transgender District, located in San Francisco, did not respond to a request for comment by press time.

"I just want to say I am so incredibly humbled to be a part of such an amazing organization and people who are doing the most work to ensure the lives of our community are being supported the way they need to be supported," Salcedo said.

Many alliance partners got the opportunity to share why they believe funding AB 2218 is important, focusing on the state's responsibility to address disparities in health care and other related fields, too, such as housing stability.

"Our time is now," Salcedo said. "Our time to address disparities in our community, but also our time to reclaim our power."

Ezak Perez, the director of programs at Gender Justice LA, said that organization is a "grassroots social justice organization by and for gender-nonconforming, Black, Indigenous trans people of color in L.A."

Perez welcomes the opportunity to work with the alliance, as Gender Justice LA seeks to "collaborate with others so our community can resist oppression, and heal from historical and present trauma," they said.

"Addressing health inequalities requires bringing down systemic and institutional barriers to accessing the critical services for marginalized communities, such as the transgender, gender-nonconforming and intersex communities," Perez added.

Khloe Rios-Wyatt, a co-founder of Alianza Translatinx, said that the Santa Ana-based organization was founded to help address these disparities in the wake of the COVID-19 pandemic.

"Funding AB 2218 is important because it will support the work of transgender, gender-nonconforming, and intersex-led organizations by and for the people we serve, and it will provide help for our organizations across California to continue to do critical work within the TGI community," Rios-Wyatt said. "Transgender, gender-nonconforming and intersex communities of color were already in a state of crisis in Orange County, and have been for decades, and with the arrival of COVID-19, the need for health resources has intensified."

Alianza Translatinx provides emergency services for TGI people, Rios-Wyatt explained, especially those who have cost barriers to insurance and care.

"We are demanding AB 2218 be funded and demand our government support transgender people," Rios-Wyatt said.