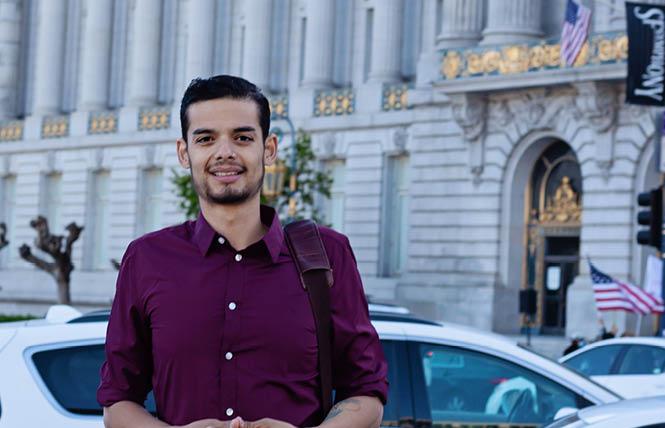 In his conversations with potential donors Eric Curry has been referred to as the "underdog" candidate and the less polite "unlikely" candidate running for San Francisco's 12th Congressional District seat covering much of the city. The 27-year-old gay, genderqueer native San Franciscan is unperturbed by such comments, as he is well aware he is mounting a long-shot bid for the House seat.

It is currently held by House Speaker Nancy Pelosi (D-San Francisco), who has yet to formally announce if she will seek an 18th two-year term in 2022. In November Pelosi had indicated that this will be her last stint serving as speaker, agreeing to a pledge she had made to hand over the gavel at the end of the 117th Congress.

Her doing so has sparked speculation on if she would also retire from Congress next year. A spokesman for her campaign did not respond to the Bay Area Reporter's question about her reelection plans.

Pelosi did file a candidacy statement in November for the 2022 election and designated what her primary campaign committee would be. As of March 31, Pelosi reported having $6.3 million in her campaign account.

No matter if Pelosi runs or not, Curry told the B.A.R. he plans to remain in the race. He noted that like all other House members, her seat is up every two years and anyone is allowed to run for it.

"I have a high amount of respect for her," he said.

Rather than attacking Pelosi, Curry said he is more focused on raising his name recognition with voters and seeking donations so he can survive the June 7, 2022 primary. Under the state's jungle primary system, the top two vote-getters regardless of party advance to compete in the November general election.

It is what allowed democratic socialist Shahid Buttar rather than the Republican candidate to land on the November ballot last fall against Pelosi. Buttar, a cisgender heterosexual man who also identifies as queer due to his gender expression being fluid, saw his campaign implode over the summer amid a sexual harassment scandal and allegations he fostered a toxic workplace.

Buttar, who denied both charges, is exploring another run in 2022. Should Pelosi decide not to run, any number of local politicians could jump into the race. Gay San Francisco Democratic Party Chair David Campos, a former supervisor, and gay state Senator Scott Wiener (D-San Francisco) have both been mentioned as potential candidates, as have former supervisors Jane Kim and Assemblyman David Chiu (D-San Francisco), and Pelosi's daughter Christine.

Long odds
No matter the electoral picture he faces next year, Curry will face steep odds in winning the race. He has never run for elected office before and moved back to San Francisco in 2019, having left to attend college in Southern California.

The UC Santa Barbara graduate — he earned a chemistry degree — is working hard to convince donors he is a serious candidate. He sold off his pet care business client list to another small business owner earlier this year in order to focus full-time on his campaign. In February, Curry took part in a training for LGBTQ elected office seekers held by the LGBTQ Victory Institute, the non-profit and non-partisan arm of the LGBTQ Victory Fund, which helps to elect out candidates across the country.

He already has set up a campaign office in the Fox Plaza building not far from City Hall and hired on two staff members: campaign manager Frances Motiwalla and Tsukuru Fors, who is overseeing his press. Curry has been plugging his candidacy via social media, such as a recent Instagram Live chat he held where he shared the stage with his friend's 11-week-old mixed breed pit bull Chihuahua puppy Jynx, adorned in a pink tutu.

"In life we tend to regret things we tend not to do, not things we did do," said Curry, wearing a white hoodie emblazoned with his campaign logo. "If I didn't make my voice heard, I was going to sit in 2022 feeling very regretful."

Monday (April 19), at 7 p.m., he will be hosting a virtual event to officially launch his House bid. Curry began to take more interest in politics due to the policies pushed by the Trump administration.

He volunteered on the short-lived presidential campaign of Kamala Harris and was overjoyed when she became Joe Biden's running mate. Seeing how the COVID pandemic upended his own business opened Curry's eyes to the impact political leaders can have, for better or worse, on people's livelihoods and everyday lives.

"The decisions being made by politicians in power today, they won't have to live with the implications of them in 20 years. My generation will have to, and I want to have a seat at the table," Curry told the B.A.R. "My experience as a gay, mixed race, first-generation college student, San Franciscan makes me uniquely qualified to represent San Francisco."

He has sworn off accepting any money from corporate political action committees. And Curry has put some of the tips he learned from the Victory Fund training into action, such as asking in an email he sent out April 15, the date San Francisco was first incorporated as a city in 1850, "Can you help us celebrate San Francisco's Birthday by chipping in $15 to our grassroots movement today?"

"I am on the phone five to eight hours a day," said Curry of his calling up potential donors and supporters.

He is approaching his campaign as he did launching his business. As the B.A.R.'s business column noted last August, he started his Eric Curry's Pets while attending UCLA then dropped out to solely focus on the pet care business. He maintained the business when he enrolled at UC Santa Barbara and relaunched it in San Francisco, only to see his customer base evaporate last March due to the COVID pandemic. Ordered to work from home, his clients no longer needed someone to walk their dog or check on their cat.

Curry was forced to move back home with his parents and landed a job at a pet store in Noe Valley for a time. He self-published a book, "A Real San Francisco Story. With Pets," that recounts his lifelong love of animals.

He didn't come out of the closet until the age of 24, a full decade after he first realized he was attracted to others of the same sex. Curry recounts the struggle he went through to accept his sexuality in his book.

As he wrote in a April 2 Instagram post for Out to Win Day, observed by the Victory Fund as a way to encourage LGBTQ people to consider running for public office, he feared that his religious family would not accept him. He chose the anniversary of his Abuelita's death to come out to them, hoping the timing of it would "soften the blow," explained Curry.

"Today I am loud and proud of who I am and it is one of my deepest desires that society become as accepting of LGBTQ people as we are of Giants fans or people with blonde hair," wrote Curry. "Isn't it time San Francisco sent a Progressive, gay, political outsider to Washington?"

Curry's paternal family is mostly Irish and settled in San Francisco prior to the 1906 earthquake; his mother is from El Salvador. The oldest of four siblings who are fifth generation San Franciscans, Curry is banking on their familial ties in the city to assist him in the House race.

"This is a district where, just based on my business and having grown up here, I have walked on almost every street in the district at least once in my lifetime and am prepared to do it again," said Curry. "Why we launched the campaign 14 months in advance. I plan to run an authentic, transparent, educational campaign."

For more about his campaign, visit https://ecforsf.com/.