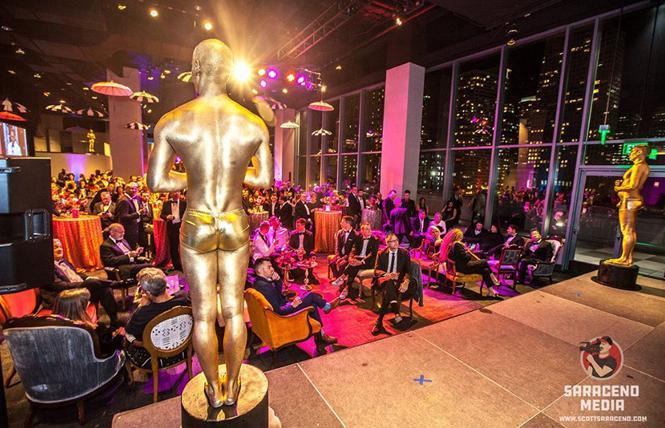 Gold "Oscar guys" have been a staple at Academy of Friends Oscar galas, where in 2019 a couple of them overlooked the crowd. Photo: Scott Saraceno

The stylish crowd that usually enjoys watching the Oscars at the Academy of Friends gala in San Francisco won't be noshing on hors d'oeuvres or sipping bubbly this year. The event has been scrapped due to the COVID pandemic.

As of Thursday, April 15, AOF's website and social media feeds had yet to reflect the cancellation. The online channels had not been updated in months.

Meanwhile, questions remain about the future of the fundraiser. The president of the organization's board of directors told the Bay Area Reporter he hopes the fundraiser can be held in 2022. But its returning will be dependent on the status of the health crisis, he noted.

"Unfortunately, we will not be able to produce the annual gala this year," Michael Myers, the president of the Academy of Friends' board, stated in an April 15 emailed reply. "The Academy of Friends annual gala requires many months of social get-togethers, sponsor donations to defer production costs, ticket sales, etc. ... that begin, usually three to four months prior to the actual gala.

"The nature of our organization is truly based upon social gatherings, unique locations, great food, interesting cocktails and the goodwill and generosity of our community," he added.

When asked why the website and social media feeds have not been updated, Myers wrote that the situation has been "in flux" and that the organization does not have a paid staff.

"As far as updating the website/social media — keep in mind, unlike most organizations in the area, we have no paid staff," he stated. "Additionally, the COVID situation has been so in flux that it's challenging to make long term decisions that can raise or lower expectations."

Last June the Academy of Motion Picture Arts and Sciences announced it was postponing the 2021 Oscars ceremony set to take place February 28 because of the health crisis. The Academy Awards telecast will take place Sunday, April 25, from Los Angeles.

As of April 15 San Francisco officials began allowing indoor ticketed and seated events and performances to resume. But they can only do so at up to 35% capacity with an approved Health and Safety Plan to protect patrons, performers, and staff from contracting COVID-19.

"We tried for last year's Pride to revamp that model with a Zoom-type celebration and it was not successful," he explained. "Last year we were very lucky and our gala occurred just prior to the COVID pandemic and, as a result, we were able to donate $20,000 to LGBT Asylum Project."

As the B.A.R. reported in January 2020, AOF announced a long term partnership with the LGBT Asylum Project whereby the nonprofit would receive the proceeds from the annual gala, which has distributed over $8.9 million to more than 74 HIV/AIDS service agencies in the Bay Area over the past 40 years. The organization provides legal services to immigrants who are fleeing persecution due to their sexual orientation, gender identity, and/or HIV status and seeking asylum in the U.S.

Prior to that arrangement, AOF donated most of the proceeds to various HIV/AIDS organizations. Each year it would select a handful of smaller nonprofits as the beneficiaries of the annual party.

The February 9, 2020 gala was held at the Commonwealth Club's swanky waterfront headquarters, just about a month before the COVID-19 pandemic led to stay-at-home orders.

"The LGBT Asylum Project feels that a virtual event is not the right fit for us though we surely look forward to having in-person fundraisers in the very near future," he stated.

"In retrospect, maybe we should have issued a press statement about this situation but honestly, we don't feel that this is news," Sengun stated in a subsequent email. "The AOF has always been one of the most glamorous in-person events of the year and that simply is not possible during a pandemic.

"We have attempted other virtual fundraisers this past year and the demand simply isn't there," he continued. "As an organization whose goal it is to help some of the most vulnerable members of our society, we can't risk putting on an event where we waste valuable time, money, and resources. Once we are safely on the other side of this pandemic, we will revisit AOF."

Kile Ozier, a gay man, founded the event in 1980 as a private Oscars viewing party with some friends. It grew to become one of the largest Academy Award viewing party fundraisers in the world, and tickets routinely cost $250 for individuals to attend decked out in tuxedos and designer dresses.

Before Sengun's email to the B.A.R. stating the event would not take place, Ozier wrote, "I can't imagine that the project isn't mounting at least a virtual event, this year; I've received no notice of the death of my baby-that-grew-to-gianthood!"

Subsequently, he wrote: "I had no idea that there would be no event, this year; after such an auspicious and promising, seemingly evolutionary joining of forces with the asylum project last year. Thus, with nary a whisper, seems a 41-year legacy has come to a silent and unacknowledged end. Another casualty of COVID."

When asked if the event will continue in future years, however, Myers did not give an unequivocal answer. Any decision will be guided by the current state of the health crisis, he noted.

"The future is always bright; however, we'll need to continue to assess the environment as the COVID situation unfolds," he stated.

AOF faced some backlash 11 years ago, when it was revealed that none of the 2010 beneficiaries had yet received the full amounts that the nonprofit had pledged to them. It had promised to distribute grants totaling $220,000.

However, it had rebounded by 2012, after Ozier returned in a supportive capacity. Ozier stated that he is no longer "directly" involved with the event's leadership, though he remains in touch with board members and chairs.

"I'm hoping that, having lain fallow through the pandemic, the organization will renew itself in some way and continue doing good work," Ozier stated. "Either way, I never envisioned my little idea would grow so much and last so long; and that's a testament to the scores of board members and hundreds (if not thousands) of volunteers who built it."

The amount of money AOF has been able to raise has decreased significantly over the past decade. In 2014, for example, it netted $90,000 but only distributed $35,000 the next year. 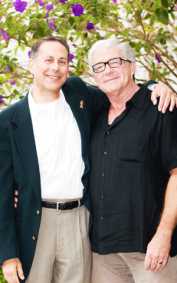