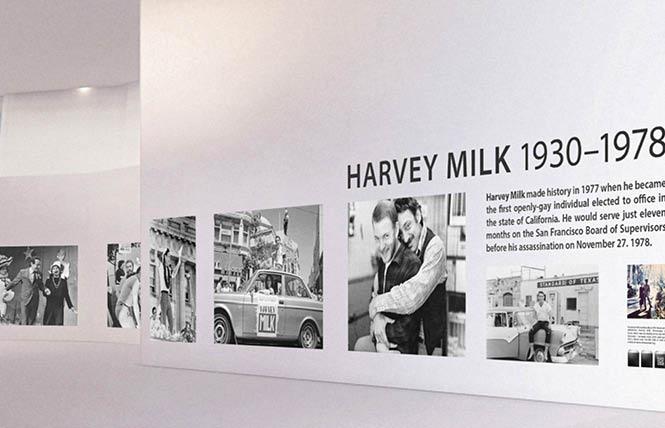 A massive photographic exhibit detailing the life and political career of the late gay San Francisco Supervisor Harvey Milk that for two years has adorned the San Francisco International Airport terminal named in his honor is being disassembled. But the artwork will soon land in a new location at the bayside aviation facility.

The 400-foot construction wall running the length of Harvey Milk Terminal 1 that was used to mount the exhibition and protect passengers from the renovation work being done on the area will begin to be taken down Friday, April 9, on schedule. When the airport debuted the tribute to the first LGBTQ person elected to public office in San Francisco and California with great fanfare in the summer of 2019, the plan was always for it to be a temporary installation.

Last March, the airport installed in a pre-security area of the terminal a smaller permanent tribute to Milk, who was elected in November 1977 only to be killed a year later along with then-mayor George Moscone inside City Hall the morning of November 27. Referred to as the Milk terminal's Central Inglenook, the intimate space features 43 images from various stages of the gay icon's life, including his childhood in New York and his days as a pioneering politician in San Francisco during the 1970s.

The exhibit, titled "Harvey Milk: Messenger of Hope," utilizes photos submitted by the public and from the archives of the GLBT Historical Society and the James C. Hormel LGBTQIA Center at the San Francisco Public Library. It didn't open to the public until late April last year because the COVID pandemic delayed the relocation of several airlines into that section of the Milk terminal.

Other than several pieces of artwork inspired by Milk that are to be installed in the terminal in late 2023, the inglenook was expected to be the sole exhibit about Milk's history to remain in the terminal. Now SFO officials have decided to remount the larger temporary installation in the Milk terminal's customs corridor, which is a passenger walkway connecting Harvey Milk Terminal 1 to the International Terminal Boarding Area A.

"We thought the panels would be shuttered and not exhibited anymore. We are excited they will live on in the customs corridor," said Tim O'Brien, assistant director and curator of exhibitions for the SFO Museum, who worked on both of the Milk exhibits. "The inglenook area is remaining, so we are excited to have two permanent Milk collections."

The customs corridor inside the post-security section of the Milk terminal is where passengers embarking from international flights will walk down as they make their way to the U.S. Customs and Border Protection checkpoint. It is expected to open this fall, and the Milk exhibit will remain on display for an indefinite period of time.

"It will be up as long as the walls are there," O'Brien told the Bay Area Reporter ahead of the airport's formal announcement April 12 of the new exhibition plans. "It is massive, the customs corridor. It is the only area of the airport that can accommodate this exhibition."

Whereas the artwork had been displayed salon style on the walls inside the Milk terminal, it will now be presented in more of a timeline fashion because the walls of the customs corridor are a smaller scale. Air travelers will find arranged in a linear manner nearly all of the 100 photos, correspondence, and campaign materials related to Milk's life that were sourced from the public, archival institutions, and photographers who were compatriots of Milk and chronicled his political rise.

SFO Museum staff will oversee the deinstallation of the existing artwork in sections, as the massive construction wall will also be removed in stages. The pieces of art will be placed into storage and reinstalled this summer along the customs corridor walls once the build out of the walkway is complete.

"We have to wait for the dust to settle with the construction," explained O'Brien, adding that the museum curators are extremely grateful to be given a second opportunity to tell Milk's story. "When you step off the plane and you enter that customs corridor there will be no mistaking where you are. It probably will indicate more than any sign can to see those images."

A new temporary Milk exhibit will also be mounted inside the Milk terminal and remain up for two years. Walls 29 feet wide and 19 feet tall are going up just beyond the security gates where new retail spaces are being built. Affixed to them will be a sample of the artwork that had been on display.

The installation, in an area being called retail alley, will feature 10 selections depicting the breadth of Milk's life. The images are being produced on vinyl at 9 feet wide and 10 feet tall. SFO Museum staff expects to begin installing them May 17 and hopes to be able to reveal the temporary exhibit to Milk terminal passengers a few days after what would have been Milk's 91st birthday on May 22, which is celebrated as a day of special significance in California.

Seven more departure gates, new concessions, and other passenger amenities should open along with the smaller exhibition in Harvey Milk Terminal 1 on May 25.

"Harvey Milk Terminal 1 honors the legacy of a pioneering civil rights leader," stated Airport Director Ivar C. Satero. "Our goal in this facility is to illuminate, educate and inspire action at a time in our history when we need to be clear and outspoken about human rights — as Harvey was for the LGBTQ community — but also for all communities of color. We are excited to bring the content of this exhibit — sourced from our own community — to a broader audience of global travelers, to ensure that the life and legacy of Harvey Milk is well-known around the world."