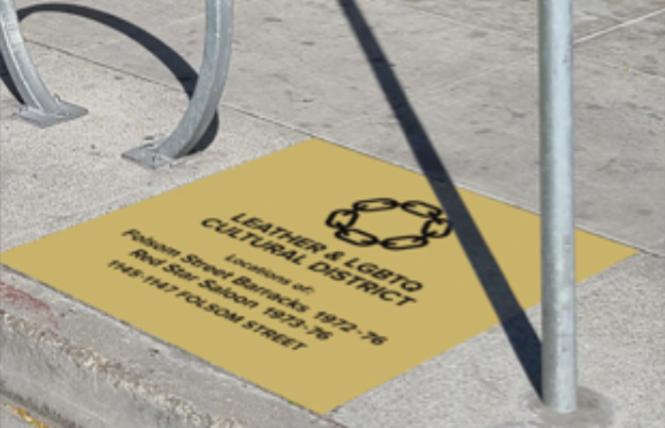 A plan to commemorate 50 locations tied to San Francisco's leather and LGBTQ culture with sidewalk markers has been endorsed by the Board of Supervisors and will file for civic design review this week. The resolution in support was taken up on an expedited process this week due to pending deadlines and a streetscape improvement project underway that could incorporate the installation of the plaques.

As the Bay Area Reporter first reported in September, the Leather & LGBTQ Cultural District has proposed recognizing current and former businesses in the area by placing bronze plaques in the sidewalk near where they operated or currently are located. Such storied establishments as the Folsom Street Barracks, The Arena, Ramrod, The Brig, and the Club Baths of San Francisco would be memorialized with historical markers.

Plaques would also be installed in front of existing businesses such as the SF Eagle, which now fronts the new Eagle Plaza public parklet honoring the leather community built out of a portion of 12th Street at Harrison, and The End Up nightclub at the corner of Sixth and Harrison streets. One would also be located at the former home of the B.A.R at 395 Ninth Street. The weekly LGBTQ newspaper, celebrating its 50th anniversary this year, called the location home from December 1988 until October 2013.

Leather district leaders plan to file by Friday, April 9, to have the city's arts commission review the designs for the plaques now that the supervisors voted 11-0 at their April 6 meeting to back the project. Gay District 8 Supervisor Rafael Mandelman asked to be added as a co-sponsor.

The district will also be seeking an estimated $120,000 to pay for the plaques from the community impact fees the developer L37 Partners will be required to pay for its 244-rental unit housing development in SOMA. The city's planning commission recently approved the project to be built at Folsom and 11th streets adjacent to the gay nightclub Oasis.

"Each one of these steps will determine whether it goes ahead and whether we can get the money or not," Robert Goldfarb, chair of the leather district's board, told the B.A.R. prior to the supervisors' meeting.

The approval processes will take anywhere from nine to 18 months, said Goldfarb. The leather district has been in close talks with the city's Public Works Department and the office of District 6 Supervisor Matt Haney, who represents SOMA, about incorporating some of the plaques into Folsom Street's sidewalks as part of the pedestrian safety improvements for one of the main corridors through the area. Its timeline for completion was delayed due to the COVID pandemic.

"I have been in discussion with DPW about the Folsom Street project for approximately two and half years. They are finalizing the drawings and the plans at the moment," said Goldfarb. "My understanding is they are going to start groundbreaking in the fall, so maybe October or November. The plaques would be part of that, but it is not entirely clear where we would fall in the project timeline."

Folsom Street at one point was known as the city's "Miracle Mile" due to the many gay bars and bathhouses that operated on or near it in the 1960s and 1970s. But the onset of the AIDS epidemic in the 1980s soon would diminish SOMA's leather scene. The health crisis resulted in most gay bathhouses and sex clubs in the area closing their doors.

By the 1990s, gentrification of the neighborhood began to push out the remaining gay bars, with only a handful left in business today. Further development in the area over the last two decades led community and city leaders to officially recognize a portion of western SOMA as an LGBTQ neighborhood in hopes of preserving it.

With businesses in the leather district devastated by the COVID pandemic, which shuttered bars and nightclubs for much of the past year, boosters of the sidewalk plaques proposal hope it will bring in an influx of visitors to the area who will support the establishments as they begin to reopen their doors due to the health crisis ebbing. LGBTQ and leather tourism has been near nonexistent over the last 12 months with the outbreak severely limiting travel and canceling the in-person parties and street fairs that catered to the fetish scene.

"This is not only appropriate from a historical perspective but of tremendous interest to tourist visitors. It will drive visitors and helps not only our culture but our economy," said Race Bannon, the B.A.R.'s former leather columnist who is active in the SOMA leather scene and community, told the supervisors' land use and transportation committee Monday, April 5.

As David Hyman, who is also involved with the SOMA leather district, noted during the land use committee hearing, "Many visitors who come for Leather Week and other special events ask about these places. They are not forgotten, but in most cases, they are invisible."