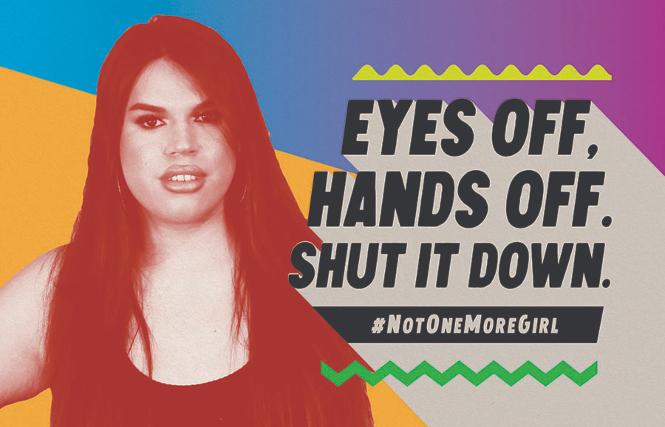 Rexy Tapia is one of the models featured in BART's new campaign against gender-based violence. Photo: Courtesy BART

A new campaign to demand a stop to sexual violence and harassment against girls and gender-expansive youth, particularly on BART, began April 2.

The campaign, #NotOneMoreGirl, will feature 300 posters and 50 large billboards produced by girls partnering with Nisha Sethi of Betti Ono, an art space in Oakland, throughout the BART system, as well as upcoming community events.

The price tag is $35,000, according to Alicia Trost, the chief communications officer for BART, which includes "printing needs, graphics, events, paying artists and youth."

Haleema Bharoocha, 22, a straight ally, spearheaded the project as part of her role as senior advocacy manager at Alliance for Girls.

Bharoocha told the Bay Area Reporter April 1 that the project is the result of years of listening to feedback from girls and gender-expansive youth, particularly those of color, who said they did not feel safe on BART.

In a 2019 report, "We saw almost every single girl and gender-expansive youth experienced violence in public spaces, and did not receive support from bystanders. Public transportation became a big issue across the board," Bharoocha said.

Youth advocates and BART leaders began a dialogue. At a morning news conference April 2, BART leaders will announce a new sexual harassment reporting category in the BART Watch app reporting tool, as well as bystander intervention resources that do not involve police at www.bart.gov/NotOneMoreGirl.

"Given that this was mostly led by Black and Latinx organizations, we are very aware police don't always prioritize safety," Bharoocha said. "For many, police intervention can result in increased harm."

BART board President Mark Foley and Vice President Rebecca Saltzman, a lesbian, also plan to bring forward two recommendations from this initiative. On April 8, a request will be made to hire transitional-age youth (18-24) to serve on hiring panels for BART's new ambassador and crisis intervention specialist positions. Further, Foley plans to move at the April 22 meeting to include sexual harassment in the rider code of conduct.

"This work has given space for BART to build trust in the community and to change policy and culture to create the equitable world that girls have been fighting for and dreaming of for a long time," BART director Lateefah Simon stated in a news release. "As we work to regain confidence in transit following the COVID-19 pandemic, we must prioritize the needs of girls and uplift solutions that will stop normalizing harassment and help girls feel safe on BART."

Bevan Dufty, a gay man who serves on the BART board of directors, is supportive of both the campaign and the policy changes.

"I enthusiastically support policy changes adding sexual harassment to BART's Code of Conduct — and TAY will be front and center in helping select our counselors to ensure they are culturally competent," Dufty said. Most of all, BART wants to send a clear message — we are organizing and mobilizing to change the culture that has normalized harassment and sexual violence.

Dufty said he is proud of the advocates of the new campaign.

"Our youth, girls, gender-expansive, and trans girls should be able to ride BART, or any transit system, without fear or intimidation," Dufty said. "I am so proud of the young women who have worked so hard to develop this incredible array of public education and other interventions to prevent harassment.

"This campaign can nip it in the bud, stopping today's harassers from becoming violent offenders as adults," he added.

Queer BART director Janice Li, who represents San Francisco along with Dufty, did not respond to a request for comment by press time.

Trost, speaking for BART police, stated April 2 that the department supports the campaign and changes.

"They are in support of this campaign," Trost wrote in an email. "The chief worked to get the new reporting category on BART Watch and they helped us develop some of the content for our new resource website."

Bharoocha talked about the process.

"It was very powerful because BART executives met us in a place we were at and met us in conversation," Bharoocha explained. "Through the process — bringing in partners like Black Girls Brilliance — we were able to ensure a meaningful partnership."

L.B. Williams, Ph.D., a queer person who is the founding director of Black Girls Brilliance, jumped at the opportunity to "make our girls' voices were brought into the project."

"I would also hope this campaign brings a level of visibility to the term of sisterhood — that we are more than one particular community," Williams said. "Our gender-expansive youth face unique circumstances, harassment on transit, at work, et cetera. In my experience it's far, far too often that we hear about these experiences."

Another person who took an opportunity to be included was Rexy Tapia, a queer, trans woman who modeled for one of the posters.

"One of my close friends and colleagues sent me an email. There was an ask for people to be featured in the campaign," she said. "When I first read about this campaign I wanted some trans representation, so I responded to that email with enthusiasm. I went to a photo shoot, and here we are."

Tapia said that safety comes in different forms for different people, but that generally girls and gender-expansive youth have to take it more into consideration.

"I think safety is so personal," she said. "There are many different forms of attack that happen to our community, ranging from physical to personal, [such as] unwanted stares. Even without a perpetrator, knowing it's a possibility can be the scariest part. I can ride BART every single day and not get attacked for one month but knowing it's coming? That's scary."

"Safety for girls is, in various ways, at the forefront of when we leave our homes, the places we desire to go to," Williams said. "There is always the thought: 'can I go down that street?' 'can I take that bus number?' It's a matter of planning."

Bharoocha said that "there's a broad range of violence riders are facing that people do not want to acknowledge."

Tapia said #NotOneMoreGirl is about people looking out for each other.

"For me, it's about your sisters, your mom and how you want to make sure they are safe," said Tapia. "Not only do I want my trans sisters — who are always under attack — to be safe, I also think of my 15-year-old godsister, who is just starting to take public transit on her own, I want her to be able to get on transit, relax and be able to daydream without being conscious of survival."

Updated, 4/2/21: This article has been updated with comments about BART police's support of the program.

Two out women to lead BART board
Sign up!