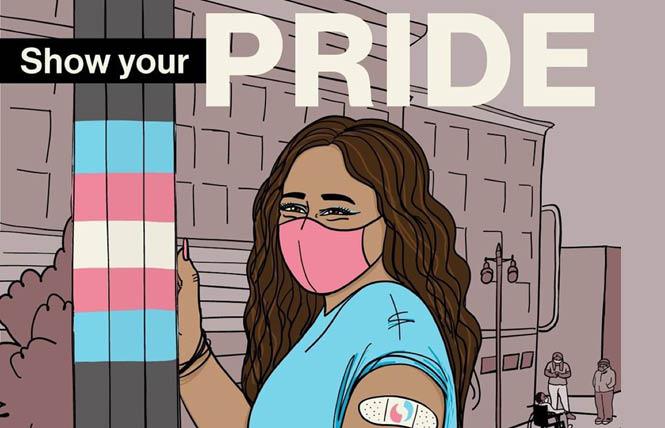 The city of San Francisco has launched a new campaign urging LGBTQ people to get vaccinated against COVID-19. Image: Courtesy the Office of Transgender Initiatives

The city of San Francisco is launching a COVID vaccination campaign in conjunction with today's Transgender Day of Visibility.

The Office of Transgender Initiatives in partnership with community organizations and the city's COVID Command Center created the multimedia vaccine campaign called "Show your Pride! Get Vaccinated." The campaign builds off of a trans wellness initiative the office and city created to address the impact of the pandemic on the LGBTQ community, vaccine hesitancy, and to improve access to information and vaccine signups, according to officials.

The campaign is utilizing video interviews and digital resources to highlight LGBTQ people who have received the vaccine in San Francisco, including those particularly from the Castro LGBTQ neighborhood and the Transgender District. Local health officials aren't tracking how many LGBTQ people are getting vaccinated though, as of March 29, of the estimated 764,514 city residents over the age of 16 eligible to be inoculated, 24% have been fully vaccinated and another 44% have received their first dose.


According to data made available by the city, 39% of Castro/Upper Market residents and 35% of Tenderloin residents, where the Transgender District is predominantly located, have been vaccinated. It is unclear how many LGBTQ people have contracted COVID-19 or died from the coronavirus. As of March 27 the city had recorded more than 35,000 cases and 463 deaths.

"Today, we honor the Trans Day of Visibility in San Francisco and around the world. Although we have made strides in our fight for equality, there is still much work ahead to combat discrimination across the country and end the violence against our trans community," stated Clair Farley, a trans woman who is the executive director of the Office of Transgender Initiatives and a mayoral adviser. "Although this year's events look different due to COVID-19, we are still coming together virtually to celebrate community, build awareness and take action against anti-trans legislation across the country, while showing our pride in our city and communities by getting vaccinated when it's our turn."

Starting Thursday, April 1, anyone over the age of 50 in San Francisco can sign up to get vaccinated. And as of April 15 anyone 16 years of age and older will be able to sign up for an appointment online.

The annual celebration of the Transgender Day of Visibility began in 2009 in order to celebrate the lives and contributions of trans and gender-nonconforming people. The launch of the COVID campaign coincides with a number of other events to commemorate the day, including two which occurred late last week: a virtual health fair showcasing community organizations and an online event titled 'Transition of Power' hosted by SF Oasis and the Transgender Day of Visibility Planning Committee.

Trans and gender-nonconforming people have been disproportionately impacted by the pandemic. As the Bay Area Reporter reported last month, the Trans Wellness SF campaign was launched by the Office of Transgender Initiatives and the Bay Area LGBTQA+ COVID Relief Coalition to push for data collection and vaccine education.

"Through the COVID-19 pandemic, the TGNCI communities have experienced further marginalization and increased struggles accessing essential resources and services, specifically TGNCI people of color, Black, Latinx, Pacific Islander, Indigenous, and those experiencing homelessness, disabilities, and underlying health conditions, " stated Anjali Rimi, the co-chair of the coalition. "Through the collective efforts of the coalition, the needs of the community were addressed through emergency food and groceries, cash relief, shelter, support for LGBTQ seniors, and more. By shifting our focus to vaccine access and priority, we aim to lower the COVID-19 infection rates among TGNCI communities now and in the future. This is a remarkable effort to address vaccine equity that has thus far been evaded."

Sa'id added that the campaign goes beyond the observance of today's Trans Day of Visibility.