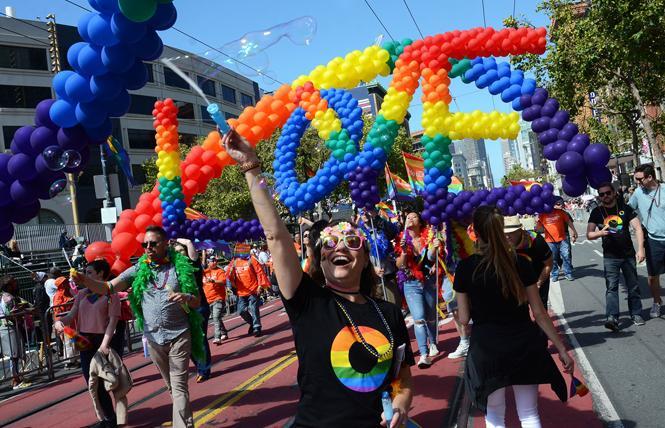 There will be no Market Street parade or Civic Center Plaza dance party this year, but the San Francisco LGBT Pride Celebration Committee announced March 24 that it will be proceeding with some limited, in-person events to celebrate this June, according to a news release.

The theme of SF Pride 51 will be "All in This Together."

"Our mission of connecting the LGBTQ+ communities of San Francisco and the Bay Area remains unchanged," Fred Lopez, a gay man who is the executive director of San Francisco Pride, stated in the release. "Knowing how deeply people miss being together, we've worked tirelessly with our partners at City Hall, the Department of Public Health, and elsewhere to ensure a number of incredible, safe experiences. SF Pride this year will be all about locals, from queer-owned small businesses to fellow nonprofits that have displayed true leadership over this past year. It's truly a Pride for the people."

Three main events
That more localized focus is to be manifested in three events: a Black liberation event scheduled to coincide with the eve of Juneteenth, two successive movie nights in Oracle Park, and a Pride Expo at Civic Center Plaza.

"Pride is one of my favorite times of year, and I am so excited that we'll have the opportunity to come together and safely celebrate our LGBTQ community this June," San Francisco Mayor London Breed stated. "While this year's celebrations won't look the same as they have in the past, SF Pride has done a great job creating events that will enable us to share our pride in our great City and stand united with our LGBTQ+ community."

Tentatively scheduled for Friday, June 18 — the eve of Juneteenth, a holiday celebrating the end of slavery in Texas — an event to celebrate Black LGBTQ people will take place in consultation with the African American Art & Culture Complex in the Western Addition.

A similar event, the Marsha P. Johnson Rally, took place last year. Further information will be announced in May, the release stated.

"The struggles for racial justice and LGBTQ+ equality are one and the same," Carolyn Wysinger, a lesbian who is the president of the San Francisco Pride Board of Directors, stated. "Last year, we brought Black Lives Matter back to the forefront of the Pride movement with a Marsha P. Johnson Rally. This year, we're working to center Black LGBTQ voices and culture even more strongly. I know how badly our communities want to be together after more than a year apart."

Melonie Green and Melorra Green, twin sisters who are the co-executive directors of the African American Art & Culture Complex, stated that they are proud to "celebrate the freedom to identify and love who we love, how we love."

"The African American Art & Culture Complex is proud to partner with San Francisco Pride, as we create space to celebrate and honor the collective freedom of our Black LGBTQIA sisters, brothers, and sibs," they stated. "We are committed to activating and strengthening our relationship by being a safe space for our collective LGBTQ+ voices through visibility and community building. Last year in June, we proudly hosted the Marsha P. Johnson Black Trans Lives Matter Rally in our open-air gallery. It was a beautiful and much-needed beginning! It is our desire that our community embrace all our individual and collective displays of freedom!"

Film screenings will occur at Oracle Park in the city's South Beach neighborhood June 11-12, in cooperation with the San Francisco Giants and Frameline, producers of the LGBTQ film festival.

"This socially distanced and ticketed event, subject to state-mandated capacity limits, grows out of SF Pride's long-standing relationship with the nation's longest-running LGBTQ+ film festival," the release states, adding that more information will be announced next month.

"Frameline is very excited to be partnering with San Francisco Pride and the San Francisco Giants to host the largest film screenings in our 45-year history," James Woolley, the executive director of Frameline, stated.

"We cannot wait to wow the audience by showing some great films on a jumbotron screen. Films are best enjoyed with an audience, and we are thrilled to be presenting a communal, but safe, event for the local community to enjoy," he added.

Stephen Revetria, the president of Giants Enterprises, touted his organization's commitment to LGBTQ inclusion in the past.

"We have collaborated with San Francisco Pride on our annual LGBTQ Nights at Oracle Park, participated in the SF Pride Parade, and raised awareness for issues important to the LGBTQ community through many initiatives, including our annual Until There's A Cure Day," he stated. "Hosting these movie nights is a natural extension of our collaboration."

The Pride organization is billing the Pride Expo as "a modified version of the annual celebration in Civic Center."

"Instead of featuring entertainment on community-programmed stages and venues, the expo will have the look and feel of a resource fair," the release states. "Queer-run businesses and organizations have borne the brunt of the pandemic, and it is vital for an institution such as SF Pride to establish a safe forum for LGBTQ+ vendors, merchants, and nonprofits to reconnect with the community, engaging with potential volunteers, customers, and clients."

The release states that the "dates and exact location" of the expo will be announced "over the next few weeks."

SF Pride officials stressed that all events will follow public health guidelines. The City and County of San Francisco entered the orange tier of COVID restrictions March 24 at 8 a.m., and vaccination rates continue to climb.

When reached for comment March 24 Peter-Astrid Kane, communications manager with San Francisco Pride, wrote in an email that "neither Fred [Lopez] nor Carolyn [Wysinger] is available to speak with the B.A.R., I'm sorry to say."