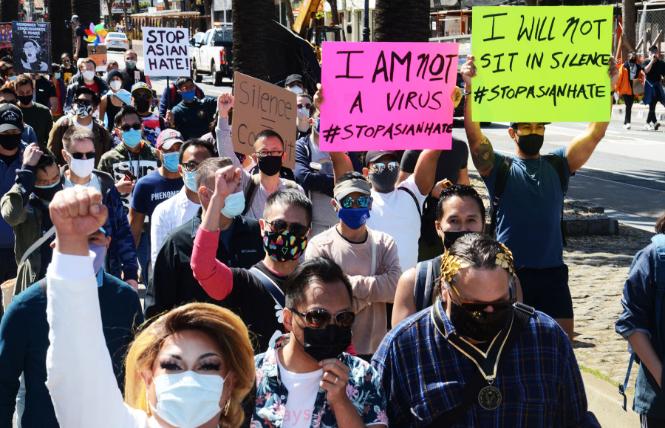 Marchers filled Market Street March 21 after a rally in the Castro for solidarity against anti-Asian violence and the recent murders in the Atlanta area. Photo: Rick Gerharter

Carrying homemade signs with phrases like "Queers against Asian hate," hundreds of people marched in solidarity with the Asian American and Pacific Islander community from the Castro Sunday in a show of solidarity following violent acts in the Bay Area and beyond.

The crowd gathered first in Harvey Milk Plaza for a rally to denounce such incidents, which many are labeling hate crimes. They include multiple incidents of AAPIs being beaten in the Bay Area, and last week's shootings in the Atlanta region that left eight people dead, including six Asian women.

The March 21 rally, organized by GLBTQ+ Asian Pacific Alliance with support from several other organizations, was an expression of the pain and fear the AAPI community is experiencing, as well as a show of unity between the LGBTQ+ and AAPI communities.

"I thought it was fuckin' amazing to be in solidarity with other fellow Asians and also allies," said Alice Tang, a straight ally who attended. "I was really touched by all the speakers."

In particular, a speech by drag performer Kristi Yummikochi resonated most with her. Yummikochi spoke about the importance of telling stories and remembering history. "We have to tell our stories, because stories, they're little pieces of history," Yummikochi said. "They're little lessons that we take with us as we go into the future."

One of the most emotional speeches of the day was from Eugene Clifton Cha, a gay Korean man who shared his fear and disbelief upon hearing about the attacks in the Atlanta area last week. He encouraged everyone to take the time to mourn, check in with others, and take care of themselves, but also to allow themselves to be moved to action.

"As much as this is a horrific and unthinkable tragedy against our communities, and one we must grieve, mourn, and remember, we can't let a crisis go to waste," he said. "And at some point our pain must turn to resolve, to action, to change."

"I think that was my favorite speech," said Chinsin Sim, a gay Asian man. "I immediately thought about my parents, my aunts, my uncles, my grandparents."

Other attendees commented on the intersection of communities of color.

"It's been a year of tumultuous change for everybody, and in 2020, we all came together for Black lives, and we're still here for Black lives," said Martin Muñoz, a gay Latinx man. "But with all the Asian hate and hate crimes that have happened, from March at the beginning of the pandemic, throughout the history of San Francisco, I mean it's due time that we're here for Asian lives."

Over the last year as the pandemic swept across the globe, former President Donald Trump and some of his supporters have repeatedly used racist phrases such as "kung flu" or "China virus" to describe the coronavirus and are accused of fanning anti-Asian sentiment. As the Los Angeles Times noted in a recent column, "California history bristles with violent attacks on Chinese individuals, including an outbreak of lynchings of Chinese residents in Los Angeles in 1871, and on Chinese neighborhoods in San Francisco and Los Angeles."

At the rally, holding a traditional Chinese fan in one hand and a sword in the other, drag performer Hennessey Williams danced and lip-synced to "Dynasty," by LGBTQ Japanese British artist Rina Sawayama. "The song 'Dynasty' talks about overcoming depression, intergenerational trauma, and breaking conventions, which speaks a lot to the LGBT Asian American community and women & transfeminine people," Williams wrote in an Instagram message. "The song speaks a lot to me personally but I felt like it was appropriate for the audience and other LGBT Asian people as well."

Several speakers drew parallels between today's climate of violence and hate, and other times in history when Asian people were victimized or scapegoated, such as the World War II-era Japanese internment camps and the Chinese Exclusion Act of 1882. At the Angel Island Immigration Station, on the bay north of San Francisco, nearly one million immigrants from mainly Asian countries were detained and processed between 1910 and 1940.

Gay state Senator Scott Wiener (D-San Francisco) drew another parallel. "I am not a member of the AAPI community, but I am a Jew and I am a gay man. And I know what happens when society refuses to take responsibility for a pandemic, and decides to blame and scapegoat marginalized communities for supposedly causing pandemics to happen," he said.

"We know, as queer people, what happens when we get blamed and scapegoated for a pandemic," Wiener added. "That's what happened, and this was ground zero around HIV/AIDS, and the scapegoating and the attacks on our community that caused so many members of our community to die and so much violence to happen. So we need to stop that in its tracks."

Tran Hoang, who identified herself as "LGBT-friendly," said the speeches were inspiring. "This was a time to really have our voices heard and really stand up for equality and know that Asians are people as well," she said.

March
After about two hours in the Castro, the group took to the streets and marched down Market Street toward Civic Center, carrying handmade signs such as "We are not silent." They were led by a large school bus painted white and labeled "wool bus," provided by the Big-Ass Amazingly Awesome Homosexual Sheep Burning Man Camp. DJ Confetti Canon blasted music from the back of the bus as participants danced and onlookers cheered.

After the march made its way to Civic Center, the tone shifted to a more intimate feel, as the crowd diminished in size and several people sat down in the plaza for another set of speakers.

Cecilia Chung, a trans woman who works at the Transgender Law Center and is a San Francisco health commissioner, gave the crowd a brief history lesson on civil rights leader Kiyoshi Kuromiya. "He was born in the internment camp, he was an assistant for Dr. Martin Luther King, he was a delegate to the Black Panther convention, he also was one of the ACT UP movement leaders, and he founded organizations to advocate and fight for resources for people living with HIV," she said.

"But how many of you have heard of him?" she asked. No one responded. "Because why? Because our education in this country is fucked up."

Tiff Lin said the killings in the Atlanta area were particularly painful for her because of her past experience as a tantric massage bodyworker. "As someone who honestly believes in sexual expression and pleasure and joy and compassion and unity, how is one to feel all of this when our world is feeling so much pain?" Lin asked.

Yuan Wang, a community organizer at API Equality Northern California, reminded those in attendance to stay involved in local organizations beyond just the day's rally and march. "Share your resources, your skills, and your time. We need you to find your role," she said.