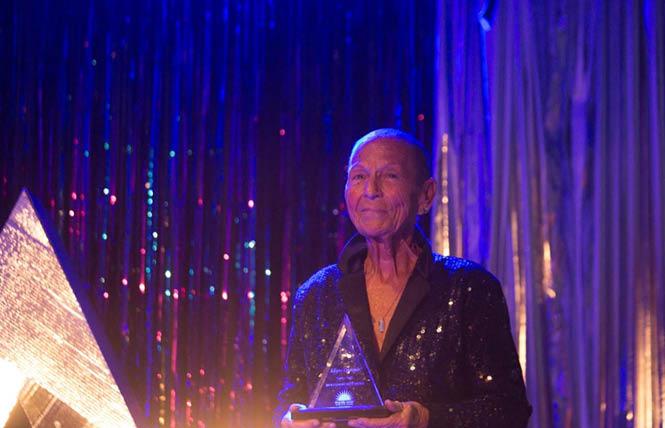 California lawmakers are aiming to renew the state's "right to die" law indefinitely so that residents with incurable diseases have the option to take their own life rather than suffer unbearably painful deaths or face spending their final months or years in a vegetative state they won't wake up from.

The End of Life Option Act went into effect June 9, 2016, authorizing the compassionate option of medical aid in dying for terminally ill, mentally capable adults who are given a prescription to end their life peacefully. The law included a sunset provision, however, allowing it to expire at the end of 2025 unless new legislation was passed.

That worries Santa Cruz resident Allyne Hammer, 78, who is pansexual and survived battles with both Stage 4 lymphoma, an incurable blood cancer, and a brain tumor. She also is living with incurable neuropathy, incurable lymphedema, and incurable Bell's palsy. Due to her myriad ailments, Hammer wants to ensure she has the option to end her life on her own terms should the time come.

"I have aged a lot though so I have other issues coming up now like heart issues. I do believe being on lockdown during the pandemic has really helped me age quicker and deteriorate and decline," Hammer, who once was a Muni bus driver in San Francisco, told the Bay Area Reporter during a recent phone interview. "I don't feel like I am going to die in the next couple of years. But after that, I think my death is closer than ever before."

Hammer's main concern isn't dying, as that is inevitable, but how she will die. The law gives her a sense of ownership over the dying process, she said, if she isn't lucky enough to die in her sleep.

"I don't want to suffer. For me, it is more about quality of life than quantity of life," said Hammer, who works to promote the issue with the advocacy group Compassion and Choices, a supporter of the end of life bills. "I want to have a good day every day. That is what it is about for me."

The new legislation to amend the law, Senate Bill 380, does not include a sunset provision. It does remove regulatory roadblocks to access the law that impede or outright prevent hundreds of Californians each year from using medical aid in dying to peacefully end their suffering.

"We have heard from many family members of terminally ill people ... who have accessed the End of Life Option Act since the law took effect. But we have also heard stories ... and seen studies that tell us that we need to reduce the bureaucratic 13-step process to access the law and increase transparency so that Californians who need this option have an easier time accessing the law," stated the bill's co-author Senator Susan Talamantes Eggman (D-Stockton), a lesbian and former hospice worker. "We created this legislation with input from medical providers, physicians, and patients to ensure that the law can work as intended for ALL eligible terminally ill patients, not just those privileged enough to be able to access it."

At the first hearing on SB 380 Wednesday, March 24, the Senate Health Committee, on which Eggman serves, passed it 8-1 after making a few amendments to it, such as using gender-neutral pronouns and removing the need for those being aided in dying to have to make a final verbal attestation. The Senate Judiciary Committee will next take it up.

"This bill is not about somebody having a bad day. This bill is about someone having a terminal illness," said Eggman in regard to concerns people would make use of the law without carefully considering the outcome of doing so and later changing their mind.

In asking for her fellow committee members' votes in support, Eggman said, "It is time to make this law permanent and make sure all eligible terminally ill patients remain autonomous and able to die with dignity."

Back then Senator Dr. Richard Pan (D-Sacramento), who chairs the health committee, didn't support the bill. Now he is supportive of extending it indefinitely and thanked Eggman for working with him on making the changes to it.

"It is now the law and clear people in California want it, and we need to make sure it works. That is why I am in support of this bill," said Pan.

"Making this permanent makes sense," he said. "It is a basic issue of compassion and mercy. Something I wish we had done a long time ago."

The principal co-authors of SB 380 are Assemblymen Jim Cooper (D-Elk Grove) and Jim Wood (D-Santa Rosa). It would still require anyone seeking aid-in-dying medication to make two oral requests, regardless of the period between oral requests, and a written request when a physician has determined, within reasonable medical judgment, that the individual will die from their terminal illness in 15 days or less.

"This bill will improve the End of Life Option Act by eliminating the sunset once and for all and removing the time-consuming barriers that terminal patients are forced to endure in order to access the law," stated Wood. "The people who have taken advantage of this law are folks who desperately want to live, but whose prognosis has robbed them of that possibility — and they want the option to pass peacefully, not painfully."

Data collected by the California Department of Public Health since the law went into effect through December 31, 2019, shows that nearly 2,000 mentally capable, terminally ill individuals with six months or less to live have received a prescription for medical aid-in-dying medication to peacefully end unbearable suffering.

"Residents of California clearly want this law and it needs to be made permanent. There have been no abuses; none of the concerns opponents had have come to pass," said Hammer. "We see good use of the law and no abuse of the law. I see no reasons why we wouldn't make this permanent."

As for those who see it as legally sanctioned suicide, Hammer said aid-in-dying laws allow for the exact opposite. Rather than an irrational act done alone, which is often the case when someone dies by suicide, people who opt for aid-in-dying have multiple conversations about it with their doctors, families, and friends. And when the time comes to end their life, loved ones often surround them, said Hammer.

"With medical aid in dying the person wants to live, but they fought the good fight and ran out of options. They don't want to suffer when dying," said Hammer, who was first drawn to the concept during the onset of the AIDS epidemic when so many of her gay male friends died from the disease. "Suicide is clearly an action someone wants to take to end their own life. Often it is a violent act; medical aid in dying is a peaceful act. The whole point of it is to have a peaceful death."

A study by Kaiser Permanente Southern California showed that a third of terminally ill adults who wanted to end their life under the law died before they could complete the process to do so. Critics contend it is too "time-consuming," as the law requires a 15-day waiting period and often takes weeks or months to finish. It is estimated that nearly 1,000 individuals statewide have died before obtaining a prescription (approximately 275 people on an annual basis) versus the nearly 2,000 who completed the process and received prescriptions for medical aid in dying.

"That mandatory minimum waiting period is a huge barrier for some patients," stated Dr. Ryan Spielvogel, a family medicine specialist who works for Sutter Health in Sacramento. "[It's] based on a flawed premise ... that a patient has only started thinking about aid in dying when they give their first verbal request to the physician. I can say unequivocally and without exception that every one of the 80+ patients that I have overseen through the process had been thinking about it for weeks or months before their first visit."

The new bill eliminates the requirement that an individual who is prescribed and ingests aid-in-dying medication make a final attestation. The bill would require that the date of all oral and written requests be documented in an individual's medical record and would require that upon a transfer of care, that record be provided to the qualified individual.

The existing law requires that an individual seeking aid-in-dying medication be subject to specific findings by their attending physician, a consulting physician, and, if determined to be necessary, a licensed psychologist or psychiatrist. The new bill would allow for a mental health professional other than a licensed psychologist or psychiatrist to conduct a mental health exam for the purpose of qualifying an individual for aid-in-dying medication.

The bill also strengthens the requirement for medical providers to provide information about medical aid in dying to an individual who requests it, or to refer the individual, upon request, to another health care provider or health care facility that is willing to provide the information. And it specifies that health facilities can prohibit employees and contractors from prescribing aid-in-dying drugs while on the facility premises or in the course of their employment.

The bill would add a definition of "coercion or undue influence" that includes deception and would create civil liability for anyone who obstructs an individual's request for aid-in-dying medication. The bill would prohibit a medical facility or provider from making false or misleading statements as to their willingness to participate, as defined, in activities under the act and requires that medical facilities post their policy regarding participation in the act on their internet website.

Where she will find a doctor willing to help her end her life is an issue for Hammer. Her main health care provider in Santa Cruz is Dignity Health Dominican Hospital, and it has chosen to opt out of the state's end of life law.

She recently started seeing a cardiologist at the Palo Alto Medical Foundation, which is affiliated with Sutter Health, to ensure she can utilize the right to die law should it become necessary.

"I am grateful. I know that I have that option," said Hammer. "It might not even be an option I use. I may go the distance and die on my own; it depends on how it works out."

For information on how to watch the Senate Health Committee hearing, which begins at 1 p.m., and provide public testimony, visit the committee's webpage at https://shea.senate.ca.gov/

UPDATED 3/24/2021 with the vote count and comments from the health committee hearing.