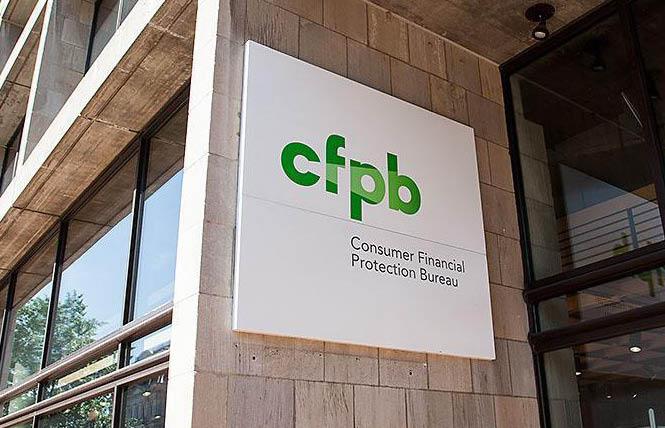 The Biden administration has issued guidance explicitly extending to LGBTQ people the protections of the Equal Credit Opportunity Act.

"In issuing this interpretive rule, we're making it clear that lenders cannot discriminate based on sexual orientation or gender identity," Consumer Financial Protection Bureau acting director David Uejio stated March 9. "The CFPB will ensure that consumers are protected against such discrimination and provided equal opportunities in credit."

The guidance comes as the bureau's answer to President Joe Biden's Day One executive order telling agencies to comply with the United States Supreme Court's 2020 decision in Bostock v. Clayton County, which itself held that a federal law — Title VII of the Civil Rights Act of 1964 — that bars discrimination on the basis of "sex," also prohibits discrimination based on sexual orientation and gender identity.

As the Bay Area Reporter reported last month, the U.S. Department of Housing and Urban Development was the first to explicitly apply the decision.

The guidance formalizes the pre-existing practice of the bureau — created in the aftermath of the 2008 financial crisis by the Dodd-Frank Wall Street Reform and Consumer Protection Act — to read the prohibition on sex discrimination in the 1974 credit law as also prohibiting discrimination on the basis of sexual orientation or gender identity.

"At some point in the Obama administration, there'd been a letter written by then-director Richard Cordray making clear that given how the Equal Employment Opportunity Commission read Title VII [of the Civil Rights Act of 1964], the Equal Credit Opportunity Act should be read the same way," Karen Loewy, a straight ally who is a senior counsel and senior strategist at Lambda Legal Defense and Education Fund, told the Bay Area Reporter. "In the Trump administration, there was an effort to undermine the Consumer Financial Protection Bureau in every way, shape, and form, so to move beyond the letter to implementing an actual interpretive rule is a huge step forward."

Loewy went on to say that this is "one of the highest levels of authority an agency has."

LGBTQs face credit discrimination, institute finds
Some 8 million LGBTQ adults live in the 35 states, plus the District of Columbia, that do not have statutes prohibiting SOGI discrimination in credit, according to statistics from the Williams Institute, an LGBTQ think tank at UCLA School of Law.

"Research on LGBT people's experiences with credit discrimination is limited — in part because creditors are not currently required by the bureau to collect data specifically on applicants' sexual orientation or gender identity," Christy Mallory, the legal director at the Williams Institute, stated March 9. "It is important that CFPB require creditors to collect this information in order to address possible discrimination against LGBT applicants."

This has led to a situation where 15% of lesbian, gay, and bisexual people were prevented from moving into or buying a house, compared to 6% of heterosexuals, according to the institute.

Loewy referred to studies showing that "when same-sex couples apply for a mortgage, they often face discrimination — either outright denials or less favorable terms."

In 2007, Lambda Legal worked on the case of Adola DeWolf and Laura Watts, who could not get a joint mortgage from Countrywide on account of being a same-sex couple.

According to Loewy, the definition companies worked with at the time was that joint mortgages required relations based on blood or legal affinity (which was not allowed between DeWolf and Watts at the time, as the state of New York did not legalize same-sex marriage until 2011.)

The result was a settlement, as mortgage giant Fannie Mae changed its rules to allow any two people planning to live in a house to obtain a joint mortgage.

"The most common way [of discriminating based on credit] is when someone trans or gender-nonconforming goes to a bank and applies for a loan and is rejected, or faces less favorable terms, not related to credit worthiness," Loewy said, citing the case of Rosa v. Park West Bank.

In 1998, a trans person named Lucas Rosa was told they could not get a loan until they "went home and changed." The 1st U.S. Circuit Court of Appeals overruled a lower court judge and ruled that Rosa had a cause of action under the Equal Credit Opportunity Act.

"Just as with the Bostock case, the Biden administration is asking all agencies to do what courts and agencies are moving toward across-the-board," Loewy said. "There is no replacement for a clear statement that this is how the law is supposed to be followed."

US Senate expected to take up out judicial nominees
Sign up!