Castro businesses demand help from SF after spate of vandalism 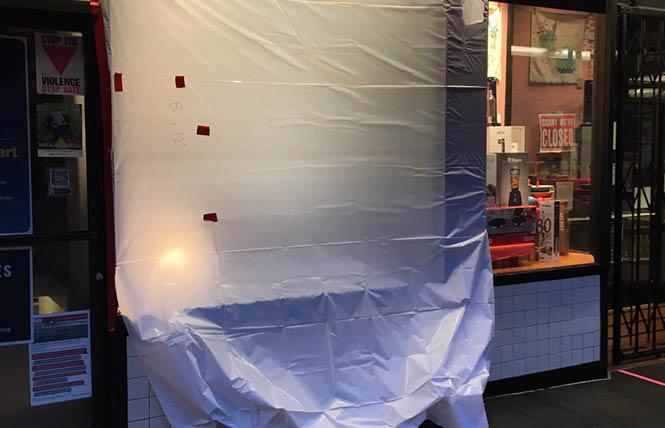 Cliff's Variety on Castro Street is one of several businesses in the neighborhood that have had windows smashed. Photo: Courtesy Cliff's Variety

Neighborhood merchants are reeling from the effects of lockdowns — such as an ongoing spate of window-breaking and other vandalism — even while the Castro joins the rest of San Francisco in moving into the less restrictive red tier of COVID-19 reopenings.

That and updates from gay District 8 Supervisor Rafael Mandelman and bisexual Assistant District Attorney Matt Donahue, his office's liaison to the neighborhood, were the focus of the virtual Thursday meeting of the Castro Merchants.

Dave Karraker, a gay man who is a spokesperson for, and board member of, Castro Merchants, told the B.A.R. late last week that the association is launching the Castro Window Recovery Initiative.

"As of this morning, our spreadsheet where businesses are recording the damage to their storefronts since January 2020 shows 88 incidents totaling more than $160,000 in damage," he stated in a February 26 email. "Of those incidents, there have been less than 10 arrests, though a great number have video footage."

During the March 4 Castro Merchants meeting, board President Masood Samereie, a straight ally, said that even that amount does not fully encompass the scale of the problem — which itself is part of an uptick in petty crime stalking the city precipitously since the onset of the COVID-19 lockdowns last March.

"We've been having lots of windows smashed in the pandemic and it's getting worse," Samereie said. "Castro Merchants has started to collect data from the businesses impacted by broken and smashed windows — and that's not all of them."

Samereie said that the merchants are prepared to lobby city lawmakers to assist businesses.

"The city let us down," Samereie said. "We are going to demand the city create a recovery fund for the businesses impacted by smashed windows — and that doesn't even consider the [stolen or damaged] merchandise."

As the B.A.R. reported last year, neighboring District 5 Supervisor Dean Preston joined forces with District Attorney Chesa Boudin to create a victim assistance program to reimburse businesses with broken storefront windows there. Samereie said at the time he hoped that could serve as a "blueprint" for other supervisorial districts facing similar challenges, such as District 8.

Mandelman, who was at the meeting, said he has been, and will be, in touch on this issue.

"I did meet with Masood [Samereie] and Dave [Karraker] on the windows and I am hoping we can have something," Mandelman said.

Donahue is one of three liaisons the Boudin administration has in District 8; he focuses particularly on the Castro and the Valencia Triangle. He said that seven arrests have been made based on the vandalism reported in the spreadsheet. Of those, six were referred to the DA's office for prosecution.

"Of the six, five were charged and have an open case currently," Donahue said. "That is seven on a list of a lot more, but it's something I'm actively doing."

Donahue said he is also "going back to reevaluate" cases that were not charged.

"I am trying to be proactive," he said.

Karraker said — making clear he was not speaking in response to Donahue's remarks — that residents and business owners are frustrated with city bureaucracy and politicking.

"It seems to me there is a lot of passing the buck with the vandalism, burglaries, and crime," Karraker said, adding that police officers blame prosecutors for not bringing cases, and prosecutors say they can't bring cases the police don't investigate.

"How are you guys working with SFPD, [the Healthy Streets Operations Center], [San Francisco Public Works] to ensure there is a holistic approach to this?" Karraker asked.

Donahue said there is much work to do to bring city agencies together.

Andrea Aiello, a lesbian who is the executive director of the Castro/Upper Market Community Benefit District, said that's not what she'd heard.

"That doesn't seem to be the case," she said. "It's something we hear from police. So if you can pass that up the chain of command, that level of communication needs to happen.

"Even during the previous D.A., I used to say there are no parents in San Francisco. Not that there's no families; there's nobody to hold anyone accountable," she added.

Aiello said that jail time isn't necessarily the way people need to be held accountable, suggesting mandatory mental health or substance abuse treatment for some people. Donahue retorted that the only tool the DA's office often has is the blunt instrument of threatening jail and that while this often has the leveraging effect of bringing people to treatment, prosecutors would like more tools. 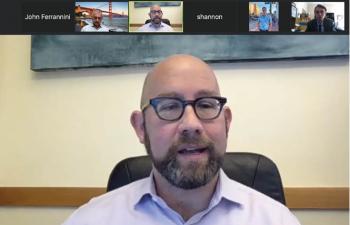 Samereie said "we are moving in the right direction" and, hopefully, "we'll be out of this sooner than later."

Under the rules in effect in San Francisco since March 3, restaurants will be allowed to open indoors at 25% capacity, and gyms at 10% capacity, among other revised restrictions. The city had last been in the red tier November 29.

In a news release March 2, Mayor London Breed thanked residents for social distancing and masking enough to make the easing of restrictions possible.

"Thanks to everyone in our city acting responsibly and doing their part, we can take another step toward reopening and beginning our recovery," Breed stated. "This year has been incredibly hard on our residents and small businesses, so every step forward is critical to making sure they can survive this pandemic.

"To make sure we can keep moving forward, we all need to stay focused and continue to follow the health guidance," Breed added. "We are making good progress managing the virus and ramping up vaccinations, and I'm hopeful for what lies ahead. We have shown that San Francisco can do what needs to be done to protect our city and each other."

Mandelman said that at least 23% of San Franciscans (over 16) had received their first COVID-19 vaccination. According to a webpage of key health indicators published by the Department of Public Health, 11% had received two doses as of March 4.

On March 2, President Joe Biden said the nation as a whole is on schedule to have vaccines available "for every adult in America by the end of May."

Mandelman also informed the merchants that gay state Senator Scott Wiener (D-San Francisco) has introduced Senate Bill 314, to "continue some of the innovative use of outdoor space" that started due to the COVID-19 pandemic.

"We're increasingly beginning to think about how some of the silver linings of COVID can continue beyond COVID," Mandelman said.

"The pandemic hit our restaurants, bars, and music venues like a wrecking ball, and we need to throw these small businesses a lifeline," Wiener said in a February 5 news release. "These businesses are part of the fabric of our communities, and they employ so many of our neighbors. SB 314 creates much more flexibility for our hospitality businesses and makes permanent the expanded outdoor dining that so many Californians have grown to love."

Mandelman said that city officials are "ironing out the details of a more permanent Shared Spaces program, trying to strike the right balance of what to carry forward more permanently," and an announcement is expected later this month.

Mandelman went on to address the homelessness crisis in the Castro, which has been a major focus of the merchant meetings for some time. He thanked the business owners for voting to support his A Place for All proposal during last month's meeting.

Under the plan, announced by Mandelman last year, the Department of Homelessness and Supportive Housing would provide safe sleeping sites across the city and figure out funding. These sites would be reevaluated annually after two years.

Aiello asked if Mandelman "could speak about what we can do, as individuals, for A Place for All?"

Mandelman said that other supervisors need to feel the heat.

"Build support in organizations you are a part of that may have citywide influence," the supervisor answered. "In terms of getting things done, I need folks in other parts of the city who think getting folks off the sidewalk is important. My colleagues on the Board of Supervisors need to see this as a No. 1, 2, 3 priority for people."

Mandelman said that last week, HSOC cleared homeless encampments at Market and Castro, and by The Detour (at Market and Sanchez streets).

Karraker asked what merchants should do when there is an encampment in front of their business, or when they see "people in distress."

"What a reasonable question. The City and County of San Francisco doesn't have an answer for you," Mandelman remarked. "In the last eight months, the city has come up with a good way of dealing with the largest encampments, but for the step down from that — one or two tent encampments impacting businesses in the neighborhood — the city has not given any of us a clear, obvious path to address those encampments."

Black Lives Matter mural may come to rainbow crosswalk
Terry Asten Bennett, a straight ally who is the general manager and one of the owners of Cliff's Variety on Castro Street, asked Mandelman if he'd heard anything about "a mural going in the middle of the street."

Mandelman replied that, yes, he had.

"The [Castro LGBTQ] Cultural District is interested in putting a Black Lives Matter banner in the street on the asphalt," he said. "I think they are looking inside the rainbow [intersection] at Castro and 18th."

Tom Temprano, a gay man who is a legislative aide to Mandelman, filled in the merchants.

"The Transgender District had done, in the middle of an intersection, a Black Lives Matter street mural," he said. "I think our cultural district is thinking about doing the same."

(Another piece of Black Lives Matter street art is located in the Western Addition, on Fulton Street between Octavia and Webster streets.)

Temprano noted that responsibility for street art exists in a "gray area between city agencies."

Mandelman urged the cultural district to go through proper channels as best it is able, and to keep neighborhood stakeholders informed, after Aiello said she had not heard about the proposal.

"There's a risk, when things go in, that they get damaged, so I do think the city needs to do some thinking on a process," the supervisor said.

Steven Bracco, who writes for Hoodline and is on the Castro LGBTQ Cultural District board, chimed in to clarify.

"We do have plans to reach out to the Castro Merchants, the CBD, and other neighborhood groups," Bracco said. "We are working on all the permits we need to get."

Other items
As the meeting drew to a close, Mia Simmans announced that the Castro Farmers Market in Duboce Triangle is planning on returning March 17, after a bumpy 2020 due to the pandemic.

The market will be open Wednesdays from 2:30 p.m. to 3:30 p.m. for seniors and other higher risk groups, before opening to the general public until 7.

Terrance Alan, a gay man and proprietor of Cafe Flore, wrote via the Zoom chat function that the eatery will be open by the summer.

Terry Beswick, a gay man who is the executive director of the GLBT Historical Society, said that the society's museum on 18th Street probably will not be open until the city moved into the next tier. There will be a virtual party, however, Friday, March 26, on the occasion of the museum's 10th anniversary.

Captain Rachel Moran, the new head of the San Francisco Police Department's Mission Station, which serves the Castro area, was introduced at the beginning of the meeting. She will probably be doing a more in-depth presentation next month, Samereie said.