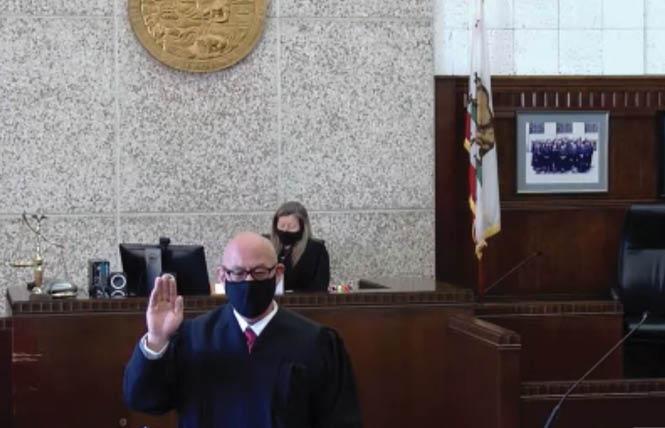 The March 1 virtual ceremony was held in Department 1 at the Rene C. Davidson Courthouse in Oakland. Fong was present, along with his husband, Chris Scott, and his father and his wife. 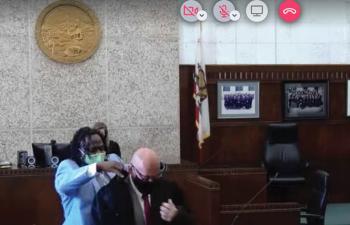 Just prior to taking the oath of office, Keith Fong was enrobed by his husband, Chris Scott. Photo: Screengrab

Before receiving the oath of office, Fong was enrobed by his husband with the plain black garment that is stipulated judges wear when on the bench.

He was sworn in by Judge Saundra Brown Armstrong of the U.S. District Court, Northern District of California. Prior to becoming a judge, Fong, 58, served as a law clerk for Armstrong.

Newsom had appointed Fong December 8, but he stayed for a couple of months so that Armstrong could hire a new clerk and he could help with the transition.

During short remarks, Fong joked that his husband had told him "that he didn't think I could be brief." But he was, thanking Martin Jenkins, a gay man Newsom recently appointed to the California Supreme Court but who had previously served as the governor's judicial appointment secretary, shepherding Fong's application through the process. He also thanked his husband, his family, and Armstrong.

"Finally, I want to express my thanks to the presiding judge and the other judges on this court who've been so welcoming," Fong said, referring to Judge Tara Desautels, who oversaw the ceremony.

As the Bay Area Reporter previously reported, Fong, a Democrat, fills the vacancy created by the retirement of Judge Ronni B. MacLauren.

He is the second gay male jurist known to be serving on the Alameda County court, as Judge Tom Reardon has served on the bench for 22 years. As of the end of 2019, there were six LGBTQ judges on the East Bay bench according to the demographic data on the state's judiciary released last March.

Fong, who is of Chinese descent, will be one of at least two gay Asian male judges in the Bay Area. The other, San Francisco Superior Court Judge Roger Chan, reached out to Fong to congratulate him on his appointment and offered his support as Fong transitions onto the bench.

"I am just thrilled. I have so many emotions; I am excited, humbled, all of those things," Fong told the B.A.R. shortly after his appointment. "It is such an honor to serve. It is especially an honor being a gay man of color joining the bench."

He had first applied for a judicial appointment near the end of former governor Jerry Brown's last term and reapplied in January 2020. Fong learned he had been selected a few days prior to the official announcement in December.

Desautels said at the end of the ceremony that Fong will be assigned to misdemeanor criminal cases and a domestic violence calendar.