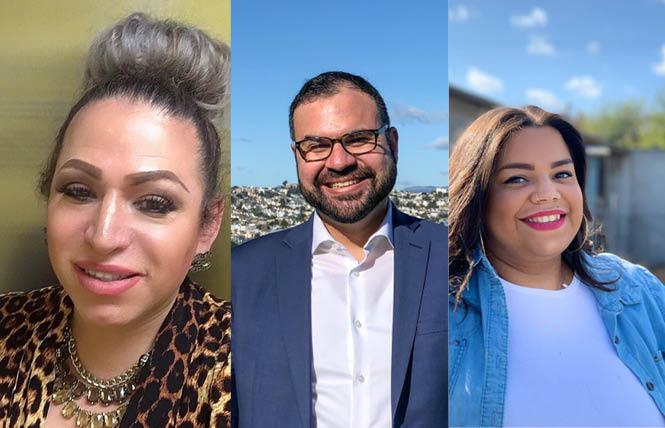 A trio of out applicants is seeking appointment to San Francisco's Immigrant Rights Commission. But with eight highly qualified people vying for seven seats on the advisory panel, the Board of Supervisors is facing a difficult decision on whom to name to it.

Further complicating matters is that three of the applicants, including two of the LGBTQ community leaders, require a residency waiver in order to serve since they do not live in San Francisco at the moment. The supervisors' rules committee will take up the appointments at its March 1 meeting, having postponed by a week taking a vote on which of the octet it would recommend be seated.

Five of the appointments are for two-year terms that expire on June 6, 2022, with one of the seats specifically meant for an immigrant to the U.S. The other two are for seats designated for immigrants with terms that expire this June 6.

"My preference is for commissioners who live in San Francisco. But that is not the only thing that we should consider. I would also like to increase queer representation on the commission," gay District 8 Supervisor Rafael Mandelman, who is vice chair of the rules committee, told the Bay Area Reporter.

Freshman District 1 Supervisor Connie Chan also serves on the rules committee. Her office did not respond to the B.A.R.'s request for comment about how she plans to consider the applicants and if she will favor city residents for the seats.

"I agree — an embarrassment of riches," Chan said during the committee's February 22 hearing. "It is always so good to see people step up to serve."

District 3 Supervisor Aaron Peskin, rules committee chair, recused himself from voting since his administrative aide Sarah Souza is one of the applicants. Should she be seated, Souza would be the first DACA participant to be a city commissioner.

Originally from Brazil, Souza has been undocumented for two decades. She was a co-leader of the successful ballot measure campaign last fall that paved the way for undocumented immigrants to apply to serve on city oversight bodies.

"It is about time we appoint real leaders that are actually living and experience every day the challenges of being undocumented. I survived the challenges of xenophobia during the Trump era," Souza told the rules committee during its meeting held virtually. "I have the lived experience and been advocating for myriad issues affecting millions of immigrants across California and San Francisco. Historically, we have been left out of the table."

Also seeking appointment to the commission is Lucia Obregon Matzer, 30, a queer immigrant from Guatemala who became a U.S. citizen four years ago. At the age of 11, Matzer settled in Turlock with her mother and moved to San Francisco to attend San Francisco State University.

An artist who belongs to the La Diaspora Culture Fest collective, Matzer is the community leadership development manager at the Mission Economic Development Agency. She is also a member of the city task force advising on the COVID pandemic response within the local Latino community.

Matzer told the rules committee she wants to serve on the advisory panel in order to "shift cultural norms" and "create a city that welcomes all immigrants in daily practices as well as in policy."

Seeking reappointment to the commission is Jessy Ruiz Navarro, who is originally from Mexico. She first joined the oversight body in 2019 as its first transgender member and its first commissioner whose primary language isn't English.

Navarro, who was unable to address the rules committee Monday, works for the Mission Neighborhood Resource Center. She does not live in San Francisco so requires a residency waiver in order to continue to be an immigrant rights commissioner.

On her application for reappointment Navarro did not specify where she is currently living. She noted she works "with homeless, most of our clients are Latino immigrants who have many needs."

And she noted that prior to the pandemic, "I was involved in volunteering in different institutions that helped my entire trans and LGBTQ community all these places have been closed due to the pandemic I decided to participate in volunteering with the food bank where every Friday I go to pick up boxes of food and distribute them to different families who lost their jobs during this pandemic."

Gay Walnut Creek resident Luis Zamora also needs a residency waiver in order to be appointed to the oversight body. He works in San Francisco as a facilities supervisor at law firm Morgan Lewis & Brockus LLP and is the current public policy chair for the Golden Gate Business Association, the country's oldest LGBTQ chamber of commerce.

Formerly president of the San Francisco Young Democrats political club, Zamora served as chief of staff and regional director for the California Young Democrats LGBTQ Caucus. In that role he helped rewrite the rules to allow undocumented individuals to become members.

A first-generation Mexican American, Zamora had served on the board of the Spectra Project, which advocated on behalf of LGBTQ refugees from the Middle East. It decided to dissolve, however, and assist in similar efforts through the nonprofit ORAM, the Organization for Refuge, Asylum, and Migration.

Zamora told the B.A.R. he hopes the supervisors will not reject him due to his not being a city resident since he is employed in the city and works with various groups based in San Francisco.

"I first moved to San Francisco back in 2012, but inevitably had to move out years later due to my partner and I not being able to find an affordable option," he wrote in an email. "I've remained active within the city ever since. People know how dedicated I am to the causes I care about and distance to the city has never been a deterrent for me."

Since the February 22 rules committee hearing Immigrant Rights Commissioner Amro Radwan withdrew his application for reappointment. Commissioners Haregu Gaime, Ryan Khojasteh, and Elahe Enssani are all seeking to be reappointed.

Gaime, who lives in Oakland, is a naturalized citizen from Eritrea who works as an immigration attorney. Khojasteh, who ran against House Speaker Nancy Pelosi (D-San Francisco) in 2018, is a San Francisco assistant district attorney and the son of Iranian immigrants. Enssani is a SF State professor who was born in Tehran, Iran.

"I want to serve as a conduit to let my community know City Hall is approachable," said Gaime.

Khojasteh and Enssani both live in the city. He noted he wants to continue serving since "there is so much work to be done," while Enssani noted that the Muslim community is still dealing with the discriminatory policies the Trump administration enacted.

"Because of the Muslim ban and sanctions, families have not been able to be united," she said.

Also seeking a seat is San Francisco resident Vinay Ramesh, a second-generation Indian American who is a Sri Lankan interpreter with the California Asylum Representation Clinic.

Adrienne Pon, executive director of the San Francisco Immigrant Rights Commission and the Office of Civic Engagement & Immigrant Affairs, advised the rules committee members that they should reappoint all of the current commissioners who have applied to remain.

The rules committee meeting begins at 10 a.m. Monday, March 1. It can be viewed live online at http://www.sfgovtv.org