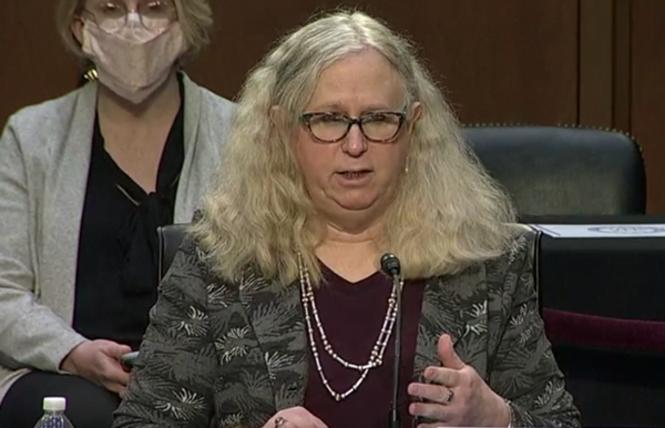 Pennsylvania Secretary of Health Dr. Rachel Levine has been nominated by President Joe Biden to become assistant secretary for health in the Department of Health and Human Services. Photo: Screen capture via CSPAN

Dr. Rachel Levine's testimony before a U.S. Senate committee on Thursday marked the historic first time an openly transgender person had taken part in a confirmation hearing for a presidential appointment, but also featured attacks against transgender youth and implicit animosity to her gender identity.

Levine has been nominated by President Joe Biden to be assistant secretary for health, the number 3 position in the U.S. Department of Health and Human Services.

Senator Rand Paul (R-Kentucky), drawing on right-wing animus toward Levine filling social media, made his views toward a transgender nominee clear by simply stating the phrase "genital mutilation" with an inflection at the start of his questioning.

"American culture is down normalizing the idea that minors can be enormous to prevent their biological development and their secondary sexual characteristics," Paul lamented during the February 25 hearing.

Levine, however, remained poised and politely informed Paul transgender medical issues are "complex," and said she would look forward, if confirmed, to coming to his office to work with him and discuss the issues.

"Transgender medicine is a very complex, and nuanced field," Levine said. "And if confirmed to the as assistant secretary of health, I would certainly be pleased to come to your office and talk with you and your staff about the standards of care and the complexity of this field."

But Paul wouldn't let up, accusing Levine of having "evaded the question," and criticizing her for a previous statement in which she, according to Paul, said she's "willing to accelerate the protocols for street kids." Conjuring tales of a teenager who transitioned, then detransitioned, and other youths "making decisions to amputate their breasts, or to amputate their genitalia," he asked Levine if minors "should be involved" in making these decisions.

Levine, however, stood firm and repeated her previous response about transgender medical issues being complex.

Paul, a physician himself, called for entering into the record Levine didn't answer the question, then continued with addition diatribe about transgender youth.

"We should be outraged that someone's talking to a 3-year-old about changing their sex," Paul concluded.

Coming to Levine's defense was Senator Patty Murray (D-Washington), chair of the Senate Committee on Health, Education, Labor & Pensions, who admonished Paul to treat nominees before the committee with respect.

"It is really critical to me that our nominees be treated with respect and that our questions focus on their qualifications and the work ahead of us, rather than ideological and harmful misrepresentations like those heard from Senator Paul earlier," Murray said.

Ruben Gonzales, executive director of LGBTQ Victory Institute, also condemned Paul's hostility to Levine on transgender youth in a statement, saying the questioning demonstrates he "does not deserve to hold public office."

"His remarks echo the talking points of the same organizations who said gay men deserved AIDS and that LGBTQ people should be criminalized," Gonzalez added. "He explicitly attacked vulnerable trans youth for his own perceived political gain and it was a disgrace. Dr. Levine is an extremely qualified nominee whose experience can help America effectively tackle this pandemic, but he took this opportunity to give voice to hate groups instead."

Aside from Paul, the questioning from senators — Democrat or Republican — stayed away from transgender issues and sought clarification on how Levine's work as Pennsylvania secretary of public health would translate to the role she's seeking as assistant secretary for health.

Levine, in her opening statement (which was halted momentarily by microphone difficulties), sought to demonstrate her qualification for the role with examples of her long medical pedigree, such as being a professor of pediatrics and psychiatry at the Penn State College of Medicine.

"Throughout my medical career I've been particularly invested in health issues that are at the intersection of physical and behavioral health and I brought that expertise to public health and addressing substance use disorders," Levine said.

Murray paid heed in her opening statement to the historic nature of Levine's confirmation hearing.

"I've always said our government should represent the people it serves and the nomination of Dr. Levine, who would make history as the highest ranking openly transgender official in the U.S. government, brings us a step closer and making sure that that happens," Murray said.

Murray also praised Levine's background as Pennsylvania secretary of health, saying she "established herself as a trusted voice to the people of Pennsylvania." Among Levine's accomplishments Murray cited was establishing guidelines for opioid prescriptions, education for medical students, treatment for opioid overdoses, combatting eating disorders, and increasing health equity for the LGBTQ community.

The assistant secretary of health oversees the Department of Health and Human Services' key public health offices, a number of presidential and secretarial advisory committees, 10 regional health offices across the nation, and the Office of the Surgeon General and the U.S. Public Health Service Commissioned Corps.

Joining Levine as a fellow nominee during the confirmation hearing was Dr. Vivek Murphy, whom Biden has nominated for U.S. surgeon general after having served in the role during the Obama administration.

Raising LGBTQ issues in a positive way was Senator Tammy Baldwin (D-Wisconsin), the first out lesbian elected to the U.S. Senate, who asked Levine about improving LGBTQ health equity. In response, Levine said data collection is key, noting under her watch Pennsylvania became the first state to collect data on whether coronavirus patients identify as LGBTQ.

"It is critically important that we include questions about sexual orientation and gender identity in our data collection," Levine said. "That would include many studies done by health and human services in the [Centers for Disease Control and Prevention]. And I think that as we get more data than we understand more about these health disparities and then we can develop the appropriate policies in order to address them."

Other Republicans during Levine's confirmation hearing didn't bring up anything about her being transgender, but one chose as a battleground her response to coronavirus as Pennsylvania secretary of health.

"Along with testing challenges last spring, your state failed to adequately protect nursing home residents from the virus, and is making unacceptable mistakes in the vaccine distribution process," Burr said. "Pennsylvania ranks is one of the most dangerous states for long-term care residents battling COVID-19."

Asked by Burr how Levine can give assurances she won't repeat problem he cited in Pennsylvania, Levine stood firm and suggested those issues were result of a lack of guidance from the Trump administration.

"We had challenges with testing, we had challenges with contact tracing, etc.," Levine said. "We have a lack of personal protective equipment, and as most other states do that were impacted in the spring. I think that the nation's response has improved significantly and under President Biden's leadership and his strategic plan and task force."

Senator Roger Marshall (R-Kansas) took issue with her approach to the coronavirus in terms of treating rural and urban counties, saying treating them the same "didn't quite make sense." However, Levine defended her approach, highlighting the reopening of businesses with a red, yellow and green coded system depending on the persistence of coronavirus in different counties.

Senator Bob Casey (D-Pennsylvania), introducing Levine at the confirmation hearing, had a different take on her approach to the coronavirus, praising her for the response and pointing out she was confirmed three times by a Republican-controlled state Senate in Pennsylvania.

"When COVID-19 came to our state, Dr. Levine's leadership was marked by clear science-based, communication, and her daily briefings, her early action or collaborative style and her calm, were recognized by the medical community, as well as leaders on both sides of the aisle," Casey said.

Senator Susan Collins (R-Maine) was measured in questioning, asking Levine at first a pediatrics question to follow up on an earlier meeting between the two, then about evidence Pennsylvania may have kept hidden nursing home deaths to coronavirus. In a Senate with a 50-50 split, Collins' vote may be key for Levine to obtain confirmation.

In response, Levine said she appreciated the meeting with Collins, answered the question about pediatrics, and stood by the handling of nursing homes. Levine added, "There is a lag time from the time that a tragic death would occur to the time that it hits our electronic death reporting system."

Annise Parker, president of the LGBTQ Victory Institute, said in a statement Levine deserves "swift confirmation" and any opposition to her is not based on her qualifications.

"Any senator who votes against Dr. Levine is motivated not by an honest review of her qualifications or concern for the nation's health, but instead by cynical partisan politics or outright bigotry," Parker said. "Dr. Levine will transform perceptions of trans Americans as Assistant Secretary, but more importantly, her leadership will help keep our nation on the path to recovery."