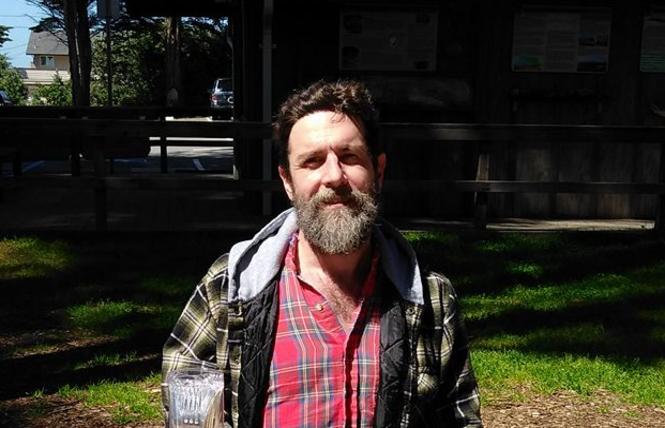 The body of Christopher Woitel was found in his apartment building. Photo: Courtesy Mark Guarino

The body of a gay San Francisco man whose family traveled from Illinois last week to look for him has been found, according to an announcement made late February 15.

The mother of Christopher J. Woitel, 50, last heard from the Guerrero Street resident January 9, according to the San Francisco Police Department.

"Today, the San Francisco Police Department and the medical examiner notified us that they have located Chris," a statement from the Woitel family reads. "It is with a heavy heart that we must inform you of Chris' passing. Please help us by preserving Chris' legacy in your memories. Thank you for your love and caring support through these very difficult times."

According to Mark Guarino, a childhood friend of Woitel who the family procured as their media liaison, Woitel's body was found "in his apartment building."

When the Bay Area Reporter contacted Guarino February 16, Guarino said he did not definitively know whether Woitel's body was found in his residence, which police previously searched, or elsewhere in the building where his home was located.

Family members who had arrived on February 11 to look for Woitel left town February 14, the day before the discovery. An autopsy is expected to take place this week, Guarino said.

The SFPD confirmed to the B.A.R. that "investigators located the body of Christopher Woitel in the attic in his home. The SFPD SVU is investigating the incident. The cause of death is pending the medical examiner's autopsy."

When asked about the location of the attic within Woitel's residence, Officer Adam Lobsinger stated, "I cannot confirm the exact layout of the apartment. The report described the area where Woitel was located as the attic."

An SFPD release Wednesday evening clarified that it was a crawl space where Woitel's body was found.

The San Francisco Office of the Chief Medical Examiner has not responded to a request for comment regarding if it has received the body.

'We suspected something was not right'
SFPD sent out a news release on the missing man February 10, just prior to his family's arrival in the city. Family members had asked police to investigate the case shortly after his disappearance.

When asked why a news release was only issued last week, SFPD spokesman Officer Robert Rueca said a few days later that it was not related to family members visiting the city.

"We can't speak to the exact investigative steps (since January 9) but coincidental? I don't know if there was anything coincidental in that," Rueca said. "We were requested to put out a news release for public assistance. We had no information as to whether the family was in town."

Having lived in San Francisco since his 1988 graduation from high school in Oak Park, Illinois, just outside Chicago, Woitel was known to frequent Emeryville and Sonora in Tuolumne County, according to the February 10 SFPD statement.

Two of Woitel's sisters, and a brother, handed out fliers outside of his apartment at the intersection of Market and Guerrero streets the afternoon of February 12.

"We suspected something was not right on January 8, January 9," another brother, Michael Woitel, told the B.A.R. February 12. "Within a 24-hour period he'd reached out to his sister and niece looking for money, and trying to get a new phone from his sister and friends. January 9 is the last known communication. Shortly thereafter, we filed a missing person case."

Last week, Emeryville Police made contact with a man who a private investigator alleged in a February 5 report was in possession of Woitel's missing cellphone.

His investigation led "to the profession of a homeless man living in a tent encampment in Emeryville who said Woitel was murdered, [and] his body deposited in the Bay at the end of Mariposa Street," Guarino stated in a news release last week.

"Woitel had befriended the homeless man years earlier in an effort to help him off the street. The man was in possession of Woitel's cellphone when Williams interviewed him February 2. The investigation also revealed the man is allegedly wanted for aggravated assault charges in Pennsylvania," it continued. "Further evidence is a trail of social media and text messages that show Woitel's frantic state of mind regarding the homeless man's possession of his phone and anxiety over the recent U.S. Capitol insurrection in Washington. ... Surveillance video shows the homeless man coming and going from Woitel's apartment."

Emeryville Police did not respond to a request for comment.

Woitel's mother is quoted in Williams' report as stating that the credit card and bank accounts of Woitel were untouched. The report also states that security camera footage at his apartment last shows Woitel on January 8 at 8:38 p.m.

Updated, 2/17/21: This article has been updated with information from SFPD.

Updated, 2/17/21: This article has been updated with additional information from SFPD.