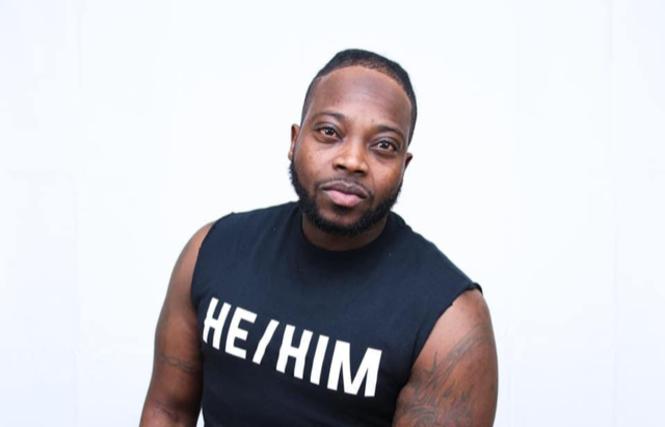 A trans Black man who is a San Francisco Fire Department paramedic is suing the city, alleging he has been discriminated against on the basis of his race and gender identity, harassed, and retaliated against.

Ronnie Jones, 44, has worked for the SFFD since 2006. He came out as transgender in 2015, and things at work have not been the same since, according to his attorney, Angela Alioto, who spoke with the Bay Area Reporter February 11.

Alioto, a past president of the Board of Supervisors, is also representing gay firefighter Keith Baraka in his suit against the city, as the B.A.R. reported January 25. To Alioto, Jones' discrimination case is part of the same pattern.

"I think that the racism in the San Francisco city government is obviously literally embedded," Alioto said. "It's part of the policy of how people are treated. I have close to 25 city cases and in the fire department, the department of health, the sheriff's department — all seem to have the same issue. When it comes to gender, in Ronnie's case, it becomes very difficult to love your job, to get up and go to work."

Lieutenant Jonathan Baxter, the public information officer for the San Francisco Fire Department, stated late February 11 that "The City Attorney's office is handling media inquiries, which is standard, related to this inquiry."

"The city takes equal employment issues seriously and is committed to fostering a welcoming, inclusive workplace free of discrimination or harassment based on race, gender identity or any other protected characteristic," Cote stated. "We have not even been served with this lawsuit, so we're not able to address it in detail. We'll review it once we've been served with it."

Jones works out of Station 49, which is in the Bayview neighborhood.

"As a black and queer-identified individual with a background of overcoming adversity such as homelessness as a teen parent, he was proud to join an esteemed organization where he could be in a position to help those who faced similar struggles," the complaint states. "In fact, this was his dream job. Mr. Jones has worked tirelessly to achieve his status as a paramedic and has obtained and maintained nearly every certification possible for paramedics.

"In 2015, Mr. Jones took the brave step of coming out as transgender and transitioned from female-to-male while on the job," the complaint states.

It was at that point, according to the complaint, that Jones began to face what the document calls a "hostile environment."

For example, Jones was told to switch to using the men's locker room and other facilities at the station — but without the other people who work there being informed of the transition, which created confusion and discomfort.

"Mr. Jones expressed his concerns with being put into a situation where he would just show up one day and walk into the men's locker room after using the women's locker room for the preceding 11 years," the complaint states. "Mr. [John] Christy [of EMS leadership] agreed that the concerns were valid but was clear that [the department of human resources] refused to allow or sanction a communication to the members of Station 49."

Jones faced critical comments from co-workers after moving his locker. For example, one stated, "Oh, fuck this shit. Now she has a locker in here now."

According to the complaint, another co-worker, identified as Jonathan Halverson, loomed over Jones and referred to him with female honorifics in what a news release from Alioto claimed was an attempt to "demean and humiliate" Jones.

"Mr. Halverson re-engaged with Mr. Jones and attempted to physically assault Mr. Jones by trying to grab his collar," the complaint states.

Later on, Halverson would glare at Jones in the communal kitchen or stare at him, the complaint states. Jones believed that Halverson was stalking him.

The complaint goes on to state that "despite being the target of harassment, Mr. Jones still sought out opportunities for advancement in the department because he is very passionate about the work." Jones applied for the position of permanent Rescue Captain. Jones was not hired for the position, but an individual of lower rank on a list of eligible employees was.

Last year, Jones reluctantly gave a presentation on how the fire department should treat trans patients.

"During his presentation, the topic of pronouns was addressed and a participant in the training (an individual seeking a Rescue Captain position) stated openly that he would not refer to transgender people with their preferred pronoun because it was 'bad grammar,'" the complaint states. "This comment was left to stand by the management team in the room and not challenged by anyone else. As a result of this unchallenged statement, Mr. Jones felt that there was open hostility to treating transgender individuals with dignity and respect."

The complaint quotes lesbian Fire Chief Jeanine Nicholson, who said last summer that the department is "not doing a good job in terms of recruiting a good amount of diverse candidates."

"The SFFD had and has a notorious reputation of denying employment to candidates who are not white and/or heterosexual," the complaint states. "This fact was publicly admitted by Chief Nicholson in July of 2020."

Alioto said that the issue was one of fairness.

"I think it's the total inability of some people in the San Francisco Fire Department to accept people for who they are," Alioto said. "This is someone who puts his heart and soul into his work. He loves it, and I'm proud that he is standing up for his right to be treated equally."

Updated, 2/12/21: This article has been updated with comments from SFFD and the San Francisco City Attorney's office.