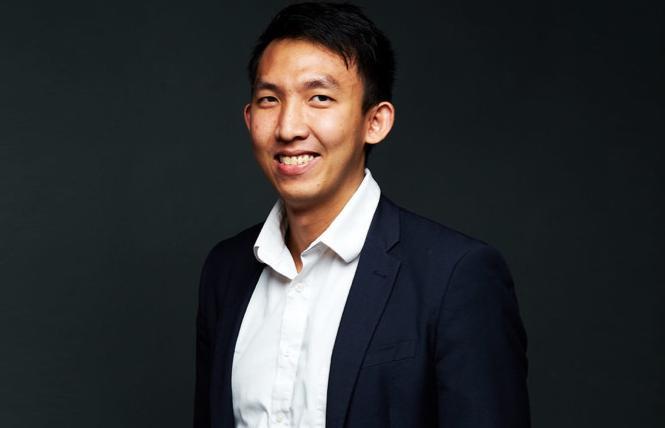 Hans How, a gay immigrant who backed Proposition C, the Aspiring Citizens' Charter Amendment, on last November's ballot, is applying to serve on a city commission. Photo: Courtesy Hans How

Immigrants who are not U.S. citizens can now apply to serve on public oversight bodies that advise San Francisco City Hall on a wide array of issues. It is due to the passage in November of Proposition C, the Aspiring Citizens' Charter Amendment.

The measure received 226,148 votes, or 54.1%, more than the simple majority it needed to pass. It brings the city in line with a change in state law instituted in 2019 that allowed non-citizens to be appointed to statewide oversight and advisory bodies. And it follows non-citizens being able to vote in San Francisco school board elections for the first time in the fall election.

Board of Supervisors President Shamann Walton, who represents District 10, and immigrant rights advocates announced Thursday, February 11, that the applications submitted by people interested in serving on a city oversight body have been updated so they no longer ask if someone is a registered voter, which had barred immigrants unable to vote from being able to apply. Walton had joined with all 10 of his colleagues last year to put Prop C on the ballot.

"I am honored to implement this historical ordinance to allow ALL of our San Francisco residents the opportunity to serve on important advisory groups and commissions," stated Walton. "We have residents who are paying taxes, utilizing our municipal services, and contributing to the San Francisco community but they are not represented in the very commissions, boards, or advisory committees that oversee and implement policies affecting them. This charter amendment will create inclusive and equitable opportunities for all San Franciscans."

There are vacancies or seats coming up for appointment on dozens of oversight panels, from the youth and entertainment commissions to the planning and police commissions. Prop C backers hope allowing immigrants to apply will reverse the decline in people of color serving on the bodies. Between 2015 and 2019 appointees of color dropped from 57% to 49%.

Among the aspiring citizens submitting applications to serve is Hans How, 28, a gay man who applied for asylum in the U.S. after facing persecution in Malaysia, a country that carries a possible jail sentence of up to 20 years for LGBTQ citizens. How, who has lived in San Francisco for four years, became an asylee in December, having won his case right before Christmas.

The volunteer vice president of AsylumConnect, a tech nonprofit that created a website and mobile app for LGBTQ+ asylum seekers, How is seeking a seat on the city's Housing Stability Fund Oversight Board.

"As a gay Asian immigrant who has seen the impact of housing insecurity on low-income families, I have dedicated my career to developing and investing in sustainable, affordable and mixed-income housing," How told the Bay Area Reporter. "I want to serve on the Housing Stability Fund Oversight Board to help my city create more affordable housing as soon as possible through a racial and economic equity lens because everyone should have the right to live in security, peace and dignity."

During a virtual news conference Thursday, former board president Norman Yee, who last year was termed out of his District 7 supervisor seat, said the implementation of Prop C means the city is no longer deprived of "great people" who can serve on the oversight panels.

"Many immigrants or undocumented people can really give back to the city in terms of their own experiences and their own intellect," said Yee, who was one of the charter amendments' main sponsors along with Walton. "It is something we have been missing. Why are we not using great people for these commissions?"

Sarah Souza, a DACA recipient who co-chairs the Commissions for All group that backed Prop C and is now working to spread the word about its implementation, has applied for a seat on the city's Immigrant Rights Commission.

"We want to make sure San Francisco has equitable representation," said Souza, which she noted is especially important "amid all the attacks on immigrant seniors" in recent months not just in San Francisco but also in Oakland and other Bay Area cities.

"We want to leverage this opportunity to condemn hate in all immigrant communities," said Souza. "Let's work together to not just further implement Prop C but build more unity in our city."

Lariza Dugan-Cuadra, executive director of the Central American Resource Center in San Francisco, said San Francisco and California setting an example for how to include the voices of immigrants in policy making should be replicated at the national level and in all states.

"We have a lot of work ahead and we are ready for it. I look forward to working with the future commissioners that will represent our communities," she said. "This is so critical, especially at this moment now, to have immigrants at the table and ensure their voices are included and heard."

To see what public advisory commissions and committees have vacancies to fill or seats coming up for appointment, as well as to download an application, click here.

Completed applications and forms should be emailed to BOS-Appointments@sfgov.org

Updated 2/12/2021 to note that Hans How was granted asylum late last year.