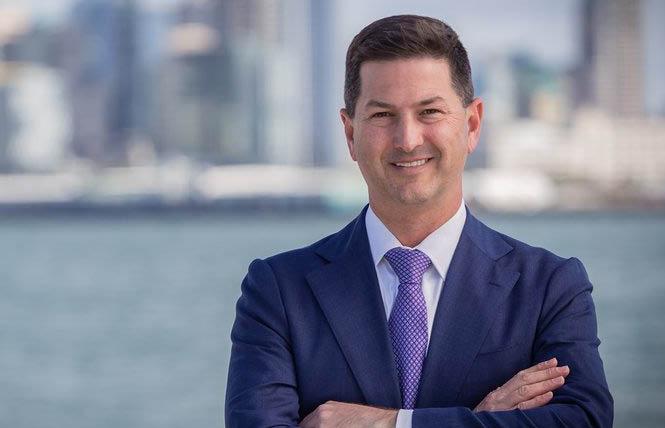 One area of focus California state lawmakers will be tackling this legislative session is how various documents, records, and state codes address the gender identity of individuals. If the bills are passed, their implementation will have positive impacts for gender-nonconforming Golden State residents from their births to their deaths.

Gay freshman Assemblyman Chris Ward (D-San Diego) is reviving legislation that Governor Gavin Newsom ended up vetoing in the fall over last minute concerns it would inadvertently out transgender and nonbinary individuals. Senate Bill 741 was aimed at allowing Californians to update their marriage certificates and the birth certificates of their children to accurately reflect their legal name and gender.

It was the first LGBTQ-focused bill to be authored by lesbian former state Senator Cathleen Galgiani (D-Stockton), who was termed out of office last year. After lawmakers had sent the bill to Newsom, state health officials flagged a problem with its implementation they said could result in individuals who sought to update certain records publicly revealing they had transitioned their gender.

Under current procedures, a person seeking to legally change their name is required to file a petition with the superior court of the county where they reside as part of the process to update their marriage or birth records or the birth certificates of their children. They also must publish their current name and the new name they are requesting in a newspaper in that county at least once a week for four weeks. Such public announcements can routinely be found in the Bay Area Reporter's classifieds section.

With his Assembly Bill 218, Ward is trying to address how someone seeking updates to their records due to transitioning their gender can avoid the public notification requirement. People can currently keep their names confidential in order to avoid domestic violence, stalking, sexual assault, or human trafficking.

Ward's legislation lays out a process for how people can without a court order request directly from the state registrar a new birth certificate or marriage license reflecting their correct gender and sex identifier of female, male, or nonbinary. But his office informed the B.A.R. it is still working on language to ensure that transgender and nonbinary individuals can work around the public posting requirement so their names are not published.

People no longer living in California but who were issued a marriage license or a birth certificate for themselves or their child by the state will also be able to apply to have their records updated if they now live in a jurisdiction that does not provide name changes by court order.

"I am really happy to make sure we are cleaning up some of the technical issues to help our youth and anybody through their life spectrum so their public records are reflective of their true gender identity without question," Ward told the B.A.R. in a phone interview.

The issue is one that has hit close to home for Ward, who has two small children with his husband, as a friend of the family has complained about their transgender son being misgendered and called the wrong name at their elementary school.

They have had "a real hard time getting his records updated," noted Ward. "When they print out the student class roster, they use the birth certificate on file."

With Newsom stating his support for the bill last year but Galgiani running out of time to address the technical issues that were raised about its implementation, Ward expressed confidence his legislation addressing those concerns will be passed by the Legislature and sent to the governor for signage.

"I am feeling good given the work done on this in previous years," said Ward, adding that there is plenty of time to make additional revisions to his bill ahead of its first hearing in a month or so.

Bills address public college and death records
Assemblywoman Rebecca Bauer-Kahan (D-Orinda) has authored AB 439 to allow for the option of nonbinary as the gender identity on death certificates. It is similar to the 2017 legislation SB 179, authored by lesbian Senate President pro Tempore Toni Atkins (D-San Diego), which authorized people to use nonbinary on their birth certificates, court documents, and driver's licenses.

"Adding nonbinary as a gender option ensures nonbinary individuals' right to equal treatment under the law, and is a needed step towards true inclusivity throughout our legal codes" Bauer-Kahan stated Friday in a news release announcing her bill. "Historically, U.S. law has not recognized the many ways people experience gender. This causes serious pain and marginalization for nonbinary communities, with their existence denied on documents that identify them."

Equality California, the statewide LGBTQ advocacy organization, is a sponsor of the bill. It noted in the release about the legislation that incorrectly assigning a male or female gender to deceased nonbinary individuals disrespects their memories.

"Affirming someone's gender identity is just as important in death as it is in life," stated EQCA Executive Director Rick Chavez Zbur. "We owe it to our nonbinary community members — and their loved ones — to correctly recognize the gender identity of all Californians on their death certificates."

Atkins and Ward, along with the six other members of the Legislative LGBTQ Caucus, are co-authors of the bill. Assemblymen David Chiu (D-San Francisco) and Mark Stone (D-Santa Cruz) are also co-authors, as is Assemblywoman Cristina Garcia (D- Bell Gardens).

Chiu is the lead author this year of AB 245, titled Affirming Transgender and Nonbinary Student's Names in College. As the B.A.R. previously reported, similar to a bill he authored last year that had to be tabled in light of the COVID pandemic, the legislation would ban public community colleges and universities from deadnaming students on their college records.

The bill would require California's public institutions of higher learning to use students' lived names on their transcripts, diplomas, and other documents. Transgender and nonbinary students would be able to use their lived names even if they have not legally changed their names under Chiu's AB 245.

Another bill having to do with gender identity is SB 272 authored by gay state Senator John Laird (D- Santa Cruz). It will update "archaic gender-specific pronouns" used in the state's vehicle code to refer to the California Highway Patrol commissioner. Laird's office noted not only have the male-specific pronouns been used in the statute for over 60 years, they do not reflect the department's current leadership.

Due to the retirement of Warren Stanley last October, Newsom appointed Amanda Ray, formally the CHP's deputy commissioner, to lead the state agency. She is the first woman and second African American to oversee the CHP in its 91-year history.

"While California leads on efforts to promote diversity, equity, and equality, our laws have not kept pace," stated Laird. "It's time we change archaic references within state law that are future forward and adequately represent those who dedicate themselves to our state. I commend our CHP commissioner for the efforts that have been made to ensure the safety of those working in the State Capitol during the recent months, and it is time we remove outdated references that do not properly acknowledge Commissioner Ray's leadership and dedication to our state."