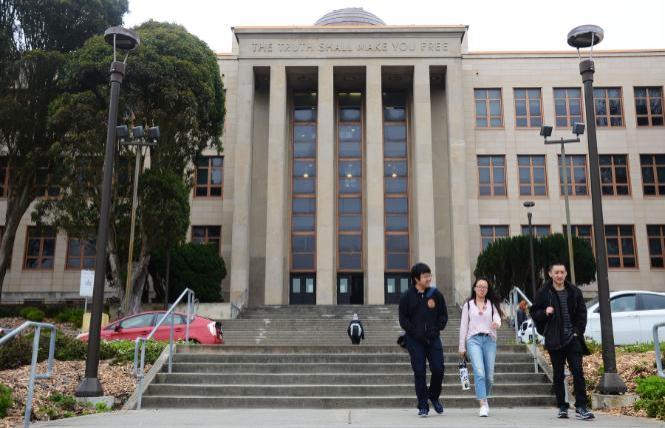 The trustees of City College of San Francisco, whose Science Hall is shown here in 2018 pre-COVID, are calling on state lawmakers to pass a bill that would end deadnaming trans and nonbinary college students. Photo: Rick Gerharter

The trustees of City College of San Francisco are calling on state lawmakers to pass a bill that would end deadnaming trans and nonbinary college students on their diplomas and other academic records. The public community college adopted such a policy in 2020.

The community college board unanimously voted 7-0 at its January 28 meeting to adopt a resolution in support of Assembly Bill 245. Trustee Tom Temprano, a gay man who is vice president of the board, introduced it, as the Bay Area Reporter's Political Notebook first reported this week.

Board President Shanell Williams, who is bisexual, and student Trustee Vick Van Chung, who is genderqueer, cowrote the resolution with Temprano. At the meeting the other four trustees asked to be added as cosponsors at the request of Chung.

"It means a lot to be able to make a difference for my community," said Chung, adding they hoped the language in the resolution could be mirrored in the state legislation.

It notes that "because we live in a patriarchal, heteronormative society, transgender and nonbinary individuals face compounding systemic barriers at educational institutions." And it specifically states that "students should not be 'deadnamed' on their diploma, which is the ceremonial document commemorating years of hard work and achievement."

The resolution also highlights how the process students must navigate to ensure their academic records accurately reflect their names "varies widely and is not standardized across higher education institutions."

"It is a no brainer," said Williams of the board backing the resolution and the bill. "We want this to be the safest place for students in California. I think this is a really important next step to get there."

As Charlie Garcia-Spiegel, 22, a queer nonbinary trans man who attends City College, told the B.A.R. ahead of Thursday's board meeting, adoption of the state bill will send a message of needed support to transgender and nonbinary students at a time when other states and countries around the globe are enacting laws and policies that harm trans youth. Just this week Montana's House of Representatives passed a bill that would ban trans women from participating in women's interscholastic sports in the Treasure State.

Assemblyman David Chiu (D-San Francisco) introduced AB 245 this month after a similar bill he authored last year had to be tabled in light of the COVID pandemic. Chiu's bill, titled Affirming Transgender and Nonbinary Student's Names in College, would require California's community colleges and public universities to use students' lived names on their transcripts, diplomas, and other documents.

Transgender and nonbinary students would be able to use their lived names even if they have not legally changed their names under Chiu's AB 245. With the health crisis impacting people's employment, Chiu earlier this month in an interview with the B.A.R. noted trans and nonbinary graduates seeking new jobs may be outed to employers and face discrimination if their academic records list their wrong name.

"I think City College has rightly led the way on pushing for policies that protect our trans and gender-nonconforming students, including allowing students to use chosen names in a variety of college documents," Temprano noted in a phone interview with the B.A.R. "I think we owe it to lead not only by example but to push other colleges around the state to do the same to protect their students."

Despite City College adopting its own policy last year, there continue to be issues with its enactment. As the B.A.R. previously noted Garcia-Spiegel has yet to receive a college-issued email address that uses the correct first initial for his first name.

Temprano pledged to see that Garcia-Spiegel receive a new email address and referred to the issue in a Facebook post this week when he shared the B.A.R.'s initial story about the resolution he co-authored.

"City College has led the way with our gender diversity and inclusion policy, but we still have work to do when students like the one interviewed in this article have waited for three years to get their email changed to match their chosen names," wrote Temprano.

At Thursday's board meeting Williams said the college must "continue to do as much as we can to protect our students and to make them feel safe on our campuses."

Political Notebook: SF college board set to back trans diploma bill
Sign up!