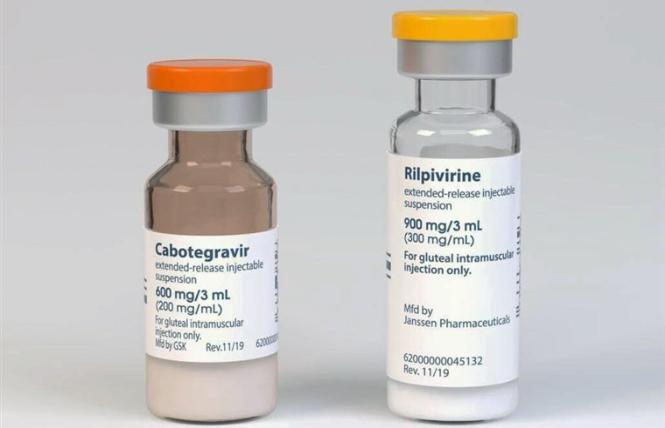 The federal Food and Drug Administration has approved Cabenuva, the first complete long-acting injectable HIV regimen that does not require daily pills. It is approved for people with an undetectable viral load who wish to switch to a long-acting regimen.

Cabenuva consists of extended-release versions of the new integrase inhibitor cabotegravir and rilpivirine (sold in pill form as Edurant). The two injections are administered in the buttocks once monthly by a health care provider. ViiV Healthcare expects to start shipping Cabenuva in February. The combination regimen will cost about $4,000 a month.

"Many of our clients, some of whom have been taking antiretrovirals daily for decades, have expressed interest in long-acting injectables," Janessa Broussard, R.N., vice president of medical affairs at the San Francisco AIDS Foundation, told the Bay Area Reporter. "Adherence to a daily medication regimen can be difficult to maintain for a variety of reasons. In some cases, COVID-19 has made it even more difficult. As a provider, I am pleased to be able to offer Cabenuva to our clients as an alternative."

Along with the injections, the FDA also approved a tablet version of cabotegravir, called Vocabria. People who want to switch will take cabotegravir and rilpivirine pills for a monthlong lead-in period to ensure that the combination is well tolerated before starting the injections. The pills may also be used as a short-term regimen if someone has to miss their planned Cabenuva injections.

Study findings
The approval is supported by findings from a set of phase 3 clinical trials. The ATLAS study enrolled more than 600 HIV-positive people with a fully suppressed viral load on their current oral regimen. They were randomly assigned to either stay on their existing regimen or switch to Cabenuva injections. After 48 weeks, both groups were about equally likely to maintain an undetectable viral load (93% and 96%, respectively).

A follow-up study, ATLAS-2M, showed that injections administered every other month worked just as well as monthly shots. The FDA approved only the once-monthly schedule, but European regulators recently authorized treatment either every four or every eight weeks. ViiV plans to request FDA approval of the bimonthly schedule in the United States.

In the FLAIR study, people starting HIV treatment for the first time were put on a standard three-drug oral regimen to bring down their viral load and then were randomized to stay on that combination or switch to Cabenuva injections after a one-month oral lead-in. Again, both groups were equally likely to have an undetectable viral load after 48 weeks (93% and 94%). Follow-up findings showed that outcomes were similar without the oral lead-in.

Injectable cabotegravir alone is also being studied for HIV prevention. Studies showed that cabotegravir injections given every other month were more effective than daily oral Truvada (tenofovir disoproxil fumarate/emtricitabine), both for cisgender men and trans women who have sex with men and for cisgender women. Truvada is highly effective when used consistently, but some people may find it easier to stick to the long-acting regimen.

Cabenuva is safe and generally well tolerated. Many study participants experienced injection site reactions such as pain, redness, or swelling, but these were mostly mild to moderate, lasted only a few days, and became less common with repeated injections.

Nonetheless, most study participants said they preferred the monthly injections to daily pills. Reasons included greater convenience, only having to think about HIV treatment 12 times a year and not having pill bottles that could reveal their HIV status to others.

People who use Cabenuva will need to see their providers more often than they do now for periodic viral load testing. But a ViiV study found that health care workers can successfully integrate the administration of monthly injections into their clinical practice.

"Among the scientific community, we recognize the innovation behind Cabenuva is truly meaningful. Not only is it the first, complete long-acting regimen, which allows for a dramatic reduction in the frequency of dosing, but it also was preferred by most clinical trial participants when compared to their prior daily oral regimens," Dr. David Wohl of the University of North Carolina at Chapel Hill said in a ViiV news release. "The FDA approval of Cabenuva underscores the value of community-centric research and I am pleased this new option will be available for those living with HIV."