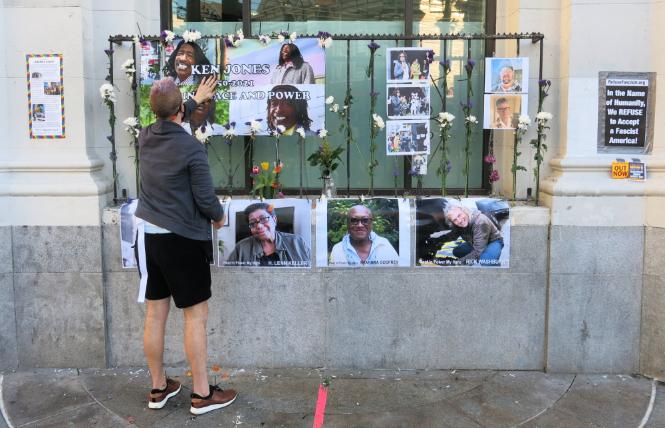 A San Francisco supervisor is open to landmarking the Bank of America building in the Castro after the financial giant initially posted signs that appeared to ban impromptu memorials.

A group of LGBTQ community members reclaimed the memorial space at the intersection of Castro and 18th streets January 18 — Martin Luther King Jr. Day — and posted memorials of recently-deceased Black LGBTQ leaders after the bank removed the signs.

The office of gay District 8 Supervisor Rafael Mandelman indicated that he would propose the city landmark the historic site if community members raise their voices in support. Gay state Senator Scott Wiener (D-San Francisco) said that he spoke with Bank of America officials to resolve the situation in hopes another community group may take over stewardship of the area.

As Hoodline originally reported January 16, signs were installed at the Bank of America building asking individuals that they "please do not post or affix materials to the fence or building surface."

The signs referenced a city law banning signage on structures without the permission of the property owner, and instituting a fine of between $50 and $500 for anyone who does so.

"My initial reaction was one of feeling deeply insulted, deeply offended that a corporation thought it could erase queer space at 18th and Castro: a space created to memorialize LGBTQ people in San Francisco and beyond who have died," said queer public historian Gerard Koskovich. "The space has been used that way since at least the 1980s."

Back then the southeast corner of Castro and 18th streets was the site of the now-defunct Hibernia Bank, which led to the area being called Hibernia Beach.

Hibernia Bank had entered the neighborhood in 1928-29 as a financial institution catering to the Irish American community that called the Castro home before the mid-to-late 20th century. (Hibernia is the Latin name for Ireland.)

According to a historical context statement posted to the memorial site by Koskovich, which he wrote with the Harvey Milk LGBTQ Democratic Club's Lee Hepner, the Hibernia Bank branch underwent a remodeling in 1978-79 that led to the creation of the wall out of what had been an entrance.

"In 1978-1979, the Hibernia Bank building was extensively remodeled and expanded. In the former parking lot, an addition was constructed with a small plaza leading to the new main entrance. As part of the makeover, a low wall and windows with an ironwork grill replaced the original entrance on the angled corner of the building," the statement reads. "With its highly visible location, the corner became a favorite cruising hangout for gay men on sunny days, earning it the nickname 'Hibernia Beach.' The newly enclosed, angled facade became a space where the burgeoning gay community of the Castro posted notices."

According to Koskovich, the space began to be used as a memorial space during the darkest days of the AIDS epidemic in the mid-1980s.

"I used to look at that corner to see my friends who had died of AIDS," Alex U. Inn, a longtime community activist, told the Bay Area Reporter.

Bank of America took over the space in 1992, but allowed the memorials to continue, which expanded to include not just members of the queer community in the Castro or San Francisco but also to memorialize Princess Diana in 1997, Matthew Shepard in 1998, the victims of the Pulse nightclub shooting in 2016, and victims of the COVID-19 pandemic in 2020.

MLK Day event
After receiving many calls of concern from members of the LGBTQ community who had read the Hoodline piece and seen comments from gay former Assemblyman Tom Ammiano denouncing Bank of America's decision, Hepner and Inn — encouraged online and behind the scenes by longtime gay activist Cleve Jones — reached out to community members and stakeholders to reclaim the Hibernia Beach site.

"It was really underscored by the fact it happened days after Ken died," Jones told the B.A.R. January 19. "That site is an important part of our community and they [Bank of America] disrespected it and are going to have to deal with that."

"It was emotional and moving because that corner holds a lot of souls," Inn said. "To be there with the community, to honor those icons was an emotional time."

About a dozen people showed up to the event, putting memorials in the space to honor those whose lives still hold so much import for the San Francisco queer community.

"It is really a profound space of folk ritual for our community, and that's not the sort of thing for a corporation to decide is too expensive or needs to be erased," Koskovich, who attended the event, told the B.A.R. "That everyone came together in that fashion was very exemplary for the LGBTQ community in San Francisco." 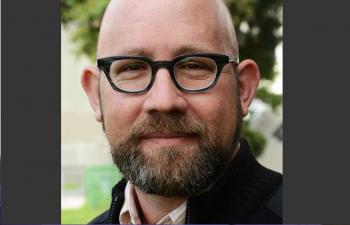 Mandelman, Wiener discussed solutions with bank
Tom Temprano, a gay man who is a legislative aide to Mandelman, told the B.A.R that he attended the event in his capacity as a Castro neighborhood resident.

"I became aware that the Harvey Milk club — that organized many events at Hibernia Beach over the years — was putting something on," Temprano said. "There were no speeches. It was the community coming together to do at the corner that we have done at that corner for 40 years now."

Temprano said that Mandelman and Wiener expressed to Bank of America the gravity of the situation late last week, and that the signs were subsequently removed on the branch site.

The bank reiterated that in a statement to the B.A.R. January 19.

"Please know that we absolutely recognize the significance and importance of this memorial site and it will remain a memorial as it has for decades," spokeswoman Colleen Haggerty wrote. "While our Castro financial center has been temporarily closed, the volume and size of items placed and posted grew significantly, not just on the ground or on the fence where most items historically are placed — but also items placed over the windows and directly onto the building's walls. We continued to maintain the site while the financial center was closed, and as we prepare for its reopening following its renovation, we will work with Castro community leaders as to how best to preserve the memorial while adhering to safety measures like keeping the windows and actual building walls clear for customers."

"What are they talking about?" he rhetorically asked the B.A.R. "This has been going on for four decades and I have never once been informed of any safety issue whatsoever."

Temprano told the B.A.R. that Mandelman insisted the signs must come down with all deliberate speed, but that long-term it may be possible to have another community stakeholder, or group of stakeholders, take over stewardship of the space, mentioning the Castro/Upper Market Community Benefit District and the Castro Merchants as potential partners.

"The solution shouldn't be that there is no memorial space," Temprano said. "The solution should be that one or a collaboration of community organizations in the neighborhood allow the honoring of people at Hibernia Beach to continue."

Neither the Bank of America building nor Hibernia Beach are among the LGBTQ historical sites landmarked by the city. Temprano said that Mandelman did not have plans to do that, but would be open to the possibility if neighbors and members of the LGBTQ community in the city express interest. Just three of the Castro's historic sites have been added to that list, the B.A.R. reported last October.

Those are the Twin Peaks Tavern at Market and Castro streets, Harvey Milk's Castro Camera shop at 573 Castro Street, and the former Names Project building at 2362 Market Street.

The site is not listed in a list of 53 potential addresses for landmarking in the citywide historic context statement for LGBTQ history in San Francisco released in 2016, and which is on pages 358-59 of the document.

Inn was glad to have the opportunity to connect with members of the community once again, even with some precautions due to the ongoing COVID-19 pandemic.

"With COVID we are all isolated but yesterday felt like family to me," Inn said.

Inn doesn't anticipate further controversy on this subject from the bank.

"They backed off," Inn told the B.A.R. "Will they come back again and try something else? I don't think so. I think it's a done deal."

Jones seemed to concur, saying, "I think they got slapped down pretty hard."

The Castro CBD and the Castro Merchants did not respond to immediate requests for comment.