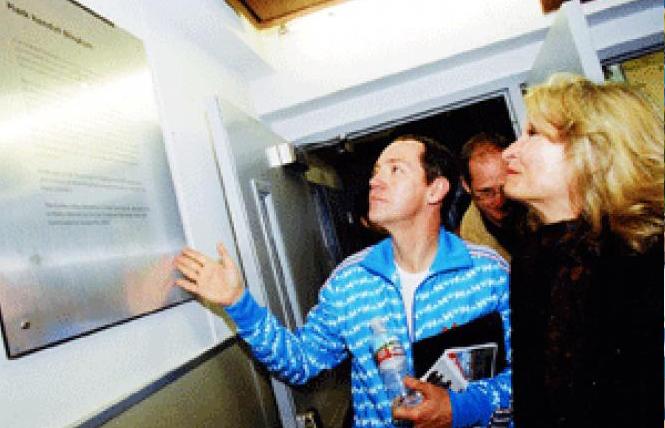 Then-Supervisor Bevan Dufty, left, showed Alice Hoagland the plaque about her son Mark Bingham that was installed at the entrance to the gymnasium at the Eureka Valley Recreation Center in the Castro that was named in his honor in 2006. Photo: Rick Gerharter

"It is with a very heavy heart that my brothers and I announce the passing of our sister, Alice Hoagland. Alice was not a victim of COVID-19. She passed away in her sleep just before Christmas, on December 22, 2020. She was 71. As my brothers — Linden, Lee, Vaughn — and I grapple with the devastating loss of our sister, there are no immediate plans for an official memorial service at this time."

Bingham was a member of the San Francisco Fog Rugby Football Club. On Sunday, the group posted on its Facebook page that Hoagland died following an illness: "Words escape us now, but Alice has always been a very important member of the Fog. Not only was she a mom to Mark, but a rugby mom to so many of us on the Fog and in the entire International Gay Rugby community.

"At every Bingham Cup, she made it a point to visit the Fog as we were her club no matter how big the festivities or how many IGR clubs were there," the group stated. "She is now with Mark in heaven."

Ms. Hoagland was a former United Airlines flight attendant and became an advocate for airline security during the nearly 20 years following the September 11, 2001 terrorist attacks. Bingham was on United Airlines Flight 93 from Newark, New Jersey to San Francisco. All 44 people onboard, including the four hijackers, died when the plane slammed into a field near Shanksville, Pennsylvania.

Bingham, 31, was among a group of passengers who turned the tables on the terrorists, forcing them to ditch the plane instead of their intended target, believed to be the U.S. Capitol in Washington, D.C.

Even before evidence surfaced of Bingham's role in fighting off the hijackers, friends immediately had no doubt of his involvement in the counterattack. On the evening of September 11, 2001, Bingham's friends gathered at the Pilsner Inn on Church Street in San Francisco. They told the Bay Area Reporter that they had no doubt that when hearing that a plane crashed in a field instead of another high-profile target that it was Bingham's flight. They recounted the story of the 6 foot 4 inch Bingham wresting the gun out of a mugger's hand.

Bingham had been a supporter of the late Arizona Senator John McCain, who spoke at Bingham's memorial service on the UC Berkeley campus less than two weeks after the 2001 attacks. He said he was in the Capitol on 9/11 and that he may owe his life to Bingham. After McCain's death in 2018, Hoagland said McCain's support helped her through the loss.

Paul Holm, Bingham's former partner of six years, told the B.A.R. that Ms. Hoagland's death after a prolonged illness came as a shock, although it was not unexpected. He declined to discuss her health out of respect for the family's wishes for privacy but he said he was glad that she died in her sleep without suffering. Holm has been dealing with his own challenges as he spent most of last year being treated for three different cancers and he is hoping for a much healthier new year.

He recalled her words of support for his relationship with Bingham.

"She told me that I made Mark the man he was," Holm said. "She saw how much we loved each other and that helped her a lot because she hadn't known a lot of gay people."

Family friend and one of Bingham's closest friends, Amanda Mark, noted Ms. Hoagland became like a mother to some of the rugby team players who might not have found similar support in their own families.

"Through her involvement with the teams she not only became an inspirational woman but really a surrogate parent accepting LGBT players," Mark told the B.A.R.

Mark said Hoagland had been battling Addison's disease but was still able to stay active although her schedule was hampered last year because of the pandemic. She said that the San Francisco Fog Rugby Club will organize a memorial service for Ms. Hoagland and that the details are still being worked out. 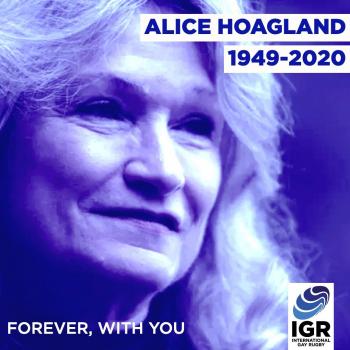 The news of Ms. Hoagland's death generated heartfelt comments from LGBTQ rugby clubs around the world.

The Ireland-based Emerald Warriors posted pictures of Ms. Hoagland in various group photos with their team on its Facebook page.

"She was such an incredible person and so many of us here in the Emerald Warriors had the privilege of meeting her," the team wrote.

International Gay Rugby posted a photo meme with the words, "Forever, With You."

Former teammate and close friend of Bingham, Bryce Eberhart, wrote on the association's page, "Alice played such an important role in shaping the culture of the [Bingham Cup]. She was the tournament mom and part of its success. Her personality and love helped make the tournament bigger, but she also made it better for everyone participating."

The Boston Ironsides team posted a photomontage of Ms. Hoagland that included captions on how special she was to the group.

"Alice served as a beacon of hope to the inclusive rugby community, often acting as the surrogate "rugby mom" to those who never had their own," the team wrote.

After reading of Ms. Hoagland's death in the B.A.R., Pink Triangle co-founder Patrick Carney wrote in an email to the paper that he fondly recalled her appearance at a 2003 pink triangle ceremony atop Twin Peaks in San Francisco.

"She was very impressive and moving and so kind to everyone who came up afterward to speak with her," Carney wrote. "After the program she said she was grateful that I introduced her son as Mark Bingham as 'a true American hero.'

"Yes, LGBTQs can be heroes too, thank you for reminding everyone," Carney recalled Ms. Hoagland saying.

The Santa Clara County Coroner's office confirmed that it was notified of Hoagland's death in the county on December 22, 2020, but could provide no other details. The B.A.R. reached out to Hoagland's family but has received no immediate response.

Updated, 1/21/21: This article has been updated with additional comments.

Updated, 1/22/21: This article has been updated with donation and other information.