Out in the Bay: 'Blackmail, My Love' reveals city's sordid homophobic past 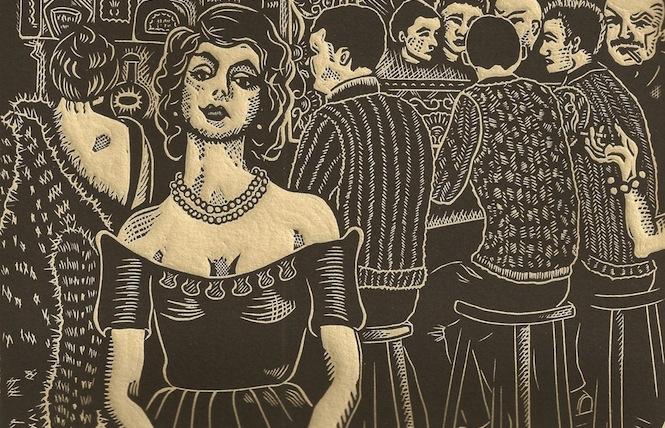 Want a break from today's scary news? Step back to a time that seems simpler with Katie Gilmartin, who served up a sultry slice of queer history as she read from her noir murder-mystery novel, "Blackmail, My Love," on this week's Out in the Bay podcast and radio show. The historian and printmaker illustrated the book with 21 of her own prints, including the character Miss Double Strand shown here.

The book is set in San Francisco, 1951 — "The Dark Ages of Queerdom," as Gilmartin put it — when cops raided gay and lesbian bars, beat up patrons and demanded protection money, and when queer folk were so afraid of public exposure they were easy blackmail targets. Hmm ... a simpler time?

"Gay and lesbian bars were popping up like mushrooms after rain, following a California Supreme Court ruling that said the police couldn't raid bars just because they had a gay clientele," said Gilmartin, setting her novel's context. "So frustrated police are stepping up surveillance and entrapment — and a blackmailer is on the loose."

The rampant homophobia of the era made gay men and lesbians perfect blackmail targets. Who would go to the cops to report blackmail when their own "lifestyle" was a crime, said Gilmartin? Especially if they were a schoolteacher like one of the book's characters.

Gilmartin has deep knowledge of the period from her original research as a queer history graduate student at Yale University. "I really wanted to get my nose out of books," she laughed, "so I interviewed older lesbians about their lives in the 1940s, 1950s, and 1960s, collecting extensive life histories that have really haunted me since," inspiring her to write the novel.

Many showed the deep harms inflicted that drove at least one woman to attempt suicide. Yet a few women somehow realized they were not sick or crazy, even though they were deemed so at the time by doctors, the justice system, and society at large.

"One woman told me 'I remember thinking, they say homosexuals are crazy. I'm not crazy. They must be wrong.' But what strength of character that would take," said Gilmartin.

She's now working on her second novel, "Thrill Spot," which takes place in 1954. It's a fictional recounting of an actual event.

Ah, good stuff! Gilmartin will be back on Out in the Bay to talk about and read from "Thrill Spot" soon. Stay tuned!

Hear more from author Katie Gilmartin on this week's Out in the Bay — Queer Radio from San Francisco. (You'll also hear the late José Julio Sarria, one of just two true-life characters in "Blackmail, My Love," sing the 1950s anthem "God Save Us Nelly Queens.") The program re-airs at 9:30 a.m. Saturday, January 16, on KSFP 102.5 FM in San Francisco only, and is available anytime on Out in the Bay's website. Out in the Bay also airs 10 p.m. Tuesdays on KALW, 91.7 FM throughout the Bay Area.