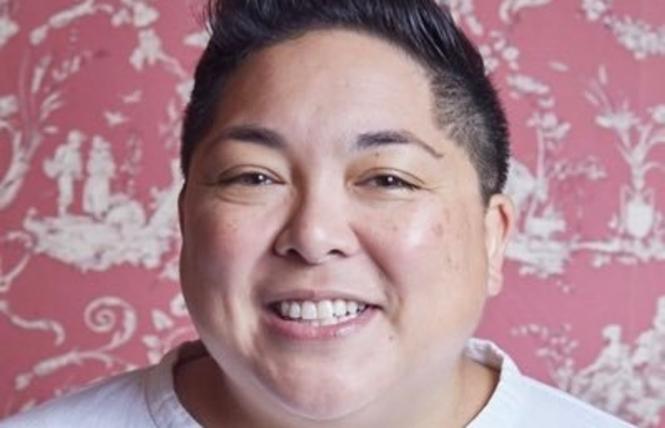 Fran Hutchins, who helped lead the fight for marriage equality in Maine as the regional field director for Mainers United for Marriage, took on a new role as the executive director of the Equality Federation at the beginning of the year.

Hutchins, a 44-year-old queer woman, has been with the Equality Federation since 2012 and is its third executive director. She is the first mixed-race Asian American to lead the organization.

When she spoke to the Bay Area Reporter January 6, Hutchins was settling into her new role. She spoke with the paper just a few moments before the insurrection in the U.S. Capitol building by pro-Trump rioters.

"Today is my third day as executive director," Hutchins said. "I've been at the federation for eight years in a couple different positions, with the last four as deputy director."

A group of state-based LGBTQ civil rights groups came together to form the Equality Federation in 1997, which in turn, seeks to help those state organizations fight for public policy changes.

Equality California is a member.

"We are thrilled for Fran Hutchins to take the helm at Equality Federation," Equality California managing director Tony Hoang, a member of the Equality Federation's board of directors, stated to the B.A.R. "A dedicated leader and strategic organizer, Fran has played a crucial role in victories for our LGBTQ+ community here in California and across the country. Fran is the bold leader that Equality Federation and our movement for full, lived LGBTQ+ equality needs in this moment."

Hutchins worked as regional field director for Mainers United for Marriage from 2009 to 2012. In that role, she helped lead the campaign for a ballot initiative that resulted in the legalization of same-sex marriage in the Pine Tree State in 2012.

"I'm most passionate about building up member organizations' ability with voter engagement so that all Equality Federation members can build a base of volunteer leaders to reach out to voters," Hutchins said. "For me it's all about building and organizing people to affect policy change."

Hutchins touted the recent work the federation's partners did in Georgia. The election of Senators-elect Jon Ossoff and the Reverend Raphael Warnock there January 5 effectively delivered control of the U.S. Senate to the Democrats — meaning President-elect Joe Biden will have a better chance to proceed with his agenda. Once Biden and Vice President-elect Kamala Harris take office January 20, she, as president of the Senate, will cast any tie-breaking vote in the upper chamber, which will consist of 50 Democrats and 50 Republicans.

"We've been working with Georgia Equality for the last year and a half to provide them with technology and tools they need for a strong ground game," Hutchins said. "They worked in the [November] Senate election and in the [recent] Senate runoff. They talked to voters who supported equality to turn them out to vote.

"A lot of groups did work to turn out pro-equality voters, but when it became clear that Georgia is a very clear spot for LGBTQ equality, a lot of folks pitched in to help Georgia Equality," she added.

Eric Paulk, a gay man who is the deputy director of Georgia Equality, said that he was proud of the group for turning out voters even with the COVID-19 pandemic preventing in-person get-out-the-vote efforts.

"It was definitely a team effort," Paulk told the B.A.R. on January 8. "We received a lot of help from Fran [Hutchins] and other equality organizations across the country. Over eight weeks leading to the runoff, we had 20 full-timers we brought on as contract staff along with 450 volunteers."

Paulk said that the volunteers collectively put in 110,000 hours, calling 25,000 people; had 6,500 phone conversations with voters, and sent almost half a million text messages.

"It was a pretty massive campaign for us," Paulk said. "This election cycle showed the power of the LGBTQ voting bloc and in races where the margins are super thin, we know LGBTQ folks vote in huge numbers."

Hutchins, who grew up in Alabama, now lives in Minneapolis with her partner Laura, who is an art history professor.

The couple has an adopted cat named Oscar Wilde and a nine-week-old puppy named Otis.

She said she is still negotiating her salary with the Equality Federation.

According to the Equality Federation's IRS Form 990 from 2018, the most recent year for which the form is publicly available, then-executive director Rebecca Isaacs made $174,173 that year. Equality Federation had total expenses of $1.6 million.

"At a time when LGBTQ people are facing daily attacks on our most basic rights while also suffering disproportionately from the triple pandemics of coronavirus, police brutality, and racism, Fran's dedicated leadership, innovative vision, and intersectional approach to achieving Equality Federation's mission will build upon the remarkable legacy Rebecca has created," Kellan Baker, the chair of the Equality Federation Institute Board, stated in a news release.

"The board is certain Fran's background and experience working with the state-based movement as well as on allied progressive issues will enhance and grow the organization as it seizes new opportunities and tackles emergent challenges in the years ahead," Baker added.